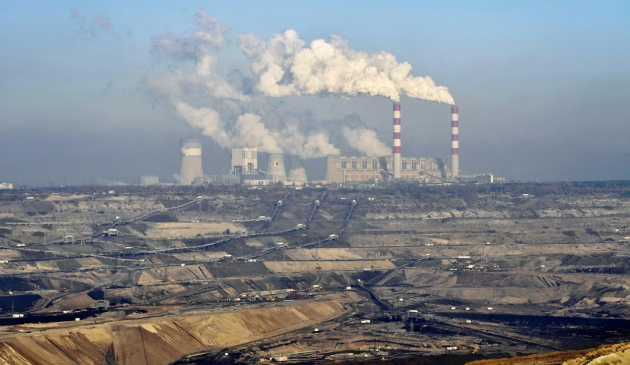 The Belchatow power station in Poland is Europe’s largest coal-burning plant, but plans to capture carbon dioxide from it are in limbo.

With its carbon-trading market and tough emissions targets, Europe plays the part of responsible adult at climate-policy negotiations. But in a growing blemish on its low-carbon image, the region has fallen behind North America in the slow crawl to demonstrate systems for capturing greenhouse-gas emissions from power plants and industry — even as it increases its use of coal.

Announcements made just before Christmas underlined Europe’s troubles in launching large carbon capture and storage (CCS) projects. A European Commission fund set up two years ago in part to support CCS could not find a single scheme to finance, and instead gave €1.2 billion (US$1.6 billion) to renewable-energy projects. And in a mortifying side note, the International Energy Agency (IEA) noted that as the switch from coal to shale gas in the United States lowers the price of coal, Europe — where gas is expensive — is burning more of this dirtier fuel. “It is hugely embarrassing for Europe’s inter­national standing on climate,” says Vivian Scott, who studies the role of CCS in climate policy at the University of Edinburgh, UK.

Admittedly, no country is finding CCS easy to fund. The technology to sieve carbon dioxide from exhaust gases has been demonstrated on a small scale, and four large projects have successfully stored the gas underground. But not one large carbon-capture system is operating at a power plant anywhere in the world. Fitting a large power plant with CCS would increase the price of its electricity by 50–100%, requiring hundreds of millions of dollars in subsidies.

Four years ago, the IEA set out a road map that called for building 100 CCS projects by 2020, together capturing around 150 million tonnes of carbon dioxide annually. Monitoring progress today, Scott says that the world will be lucky to see 20 completed in that time (see ‘Carbon capture sputtering’). “The reality is that incentives in place for renewable energy are not in place for CCS. Government policies are not ambitious enough to drive large CCS projects,” says Juho Lipponen, head of CCS at the IEA. Governments have pledged an estimated $20 billion for CCS demonstrations, but more like $100 billion would be needed to meet the IEA’s original road map, he adds.

Yet the CCS industry in Europe has been hit particularly hard, by a combination of economic recession, political reluctance and Brussels bureaucracy. Europe has favoured wind and solar projects, with both direct grants and ‘feed-in tariffs’ that guarantee high prices for low-carbon electricity. Per unit of electricity, these subsidies have been as generous as those needed for CCS — but because the projects are smaller, individual payments are less daunting. CCS has had some direct grants but no feed-in tariffs; instead, plant operators were expected to benefit from Europe’s emissions-tradingscheme, under which polluting industries trade allowances to emit carbon dioxide. Utility companies that built CCS projects would be able to sell excess carbon credits, and the sale of 300 million credits would also finance a European CCS funding scheme (known as NER300). 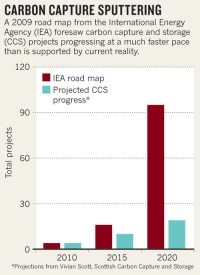 But the price of credits collapsed to €6–7 per tonne last year, as the recession cut industrial emissions. Last year, a sale of 200 million credits raised only €1.5 billion, one-third of what planners had hoped for. “The collapse of the emissions-trading-scheme price is the biggest culprit for the lack of progress,” says Howard Herzog, a sequestration researcher at the Massachusetts Institute of Technology in Cambridge.

Even so, the commission’s fund had shortlisted ten CCS projects by July 2012, waiting for guarantees of co-funding from member states. But five of the six countries in which the plants were to be built — the United Kingdom, the Netherlands, Poland, Italy and Romania — “didn’t step up to the plate,” says Chris Davies, a British member of the European parliament who advocated for the CCS fund. Meanwhile, a plan to capture carbon emissions from a French steel plant became a casualty when owners ArcelorMittal, based in Luxembourg, pulled out of the scheme.

The missed opportunity has delayed CCS in Europe by two years, says Philippe Paelinck, who oversees CCS development at French engineering firm Alstom, based in Levallois-Perret outside Paris. Alstom runs carbon-capture technology at a number of pilot projects and had hoped to scale it up at three NER300 candidate projects. Nevertheless, the NER300 fund will award a second phase of grants, potentially this year; Paelinck thinks CCS projects in the United Kingdom, Romania and the Netherlands are well placed to gain some funding. Separate funding schemes, such as a £1-billion (US$1.6-billion) CCS competition in the United Kingdom — which is revamping its electricity market to allow tariff-like support for CCS — could also launch projects. “There’s still activity for CCS in Europe: it’s just proving to be a much harder sell than initially thought,” says Lipponen.

A helping hand from oil

In the United States and Canada, CCS project developers have made faster headway by combining public subsidies with sales of the carbon dioxide they capture. Oil companies inject the gas — which sells for $20–40 per tonne — into the ground to help to loosen trapped oil. Two large North American projects are due to start capturing carbon in 2014: Canada’s Can$1.24-billion (US$1.26-billion) Boundary Dam project in Saskatchewan, a 100-megawatt project that would rebuild one unit of an existing coal-fired plant; and the US$2.4-billion Texas Clean Energy Project near Odessa, a new 400-megawatt power plant that would gasify its coal before burning. A similar $2.4-billion plant in Kemper County, Mississippi, is also scheduled to start operation in 2014 but is currently facing a legal dispute over whether it can raise local electricity rates.

“Time will tell whether this technology has a market. For now it’s important to see these plants up and running.”

Funding CCS by striking deals with oil producers is not an option in oil-poor parts of Europe, however. And Stuart Haszeldine, a geologist at the University of Edinburgh, cautions that although selling carbon dioxide for oil extraction may help to get the industry going, it comes at the cost of the carbon emitted from the extra oil: he claims (in unpublished calculations) that once oil production is factored in, CCS funded in this way could actually cut emissions by only 10%.

Still, CCS advocates say that large-scale demonstrations of the technology are crucial because CCS offers the only way to clean up emissions from coal, which the IEA predicts will overtake oil to become the world’s leading energy source by 2017. “Time will tell whether this technology has a market. For now it’s important to see these plants up and running,” says Julio Friedmann, head of the carbon-management programme at Lawrence Livermore National Laboratory in California. No country with long-term climate obligations could seriously meet them without CCS, he says. “Yet Europe is shutting down nuclear plants, building coal plants, and not keenly pursuing CCS. So the question is, is it serious about cutting emissions?”