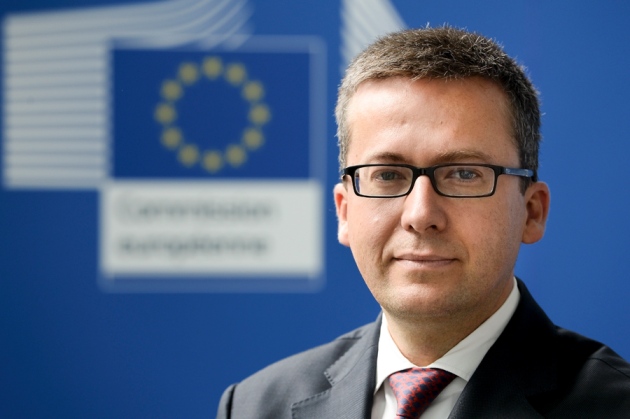 Carlos Moedas wants to improve the working lives of scientists.

Last November, Portuguese engineer-turned-economist Carlos Moedas was plucked from managing his country’s budget-cutting austerity programme to take charge of the research portfolio at the European Commission in Brussels.

Five months into his five-year term as research commissioner, Moedas spoke to Nature about his hopes and ambitions for the scientific programmes run by the European Union (EU), particularly the huge seven-year €80-billion (US$86-billion) Horizon 2020 (H2020) research programme, which runs until 2020. Moedas wants scientists to change their mentality for H2020, breaking free of individual silos and including more social science. But he is already facing complaints that money is being stripped from the programme to finance other European initiatives, such as the proposed €16-billion European Fund for Strategic Investment (EFSI), a Europe-wide bid to stimulate the region’s economy. The following is an edited version of the interview.

What is the best thing about your job?

The great privilege of working day after day with brilliant minds. I’ve never had such a job. Now I can dream of making the world a better place — generally by contributing to wealth through bringing science closer to the market, and specifically by making life easier for scientists.

How do you answer scientists who are angry that the commission axed the post of chief scientific adviser last November?

I can promise you that there will be a system of scientific advice and it will be in place by the summer. [Commission] president [Jean-Claude] Juncker has asked me to look for the most appropriate system for the commission — as opposed to the system that works best in the UK, or in any other particular country. I will be proposing a system that allows timely advice to be gathered for all of the commissioners when it is needed — such as when new legislation is being prepared, or when there is an issue of urgency. The former chief scientific adviser, Anne Glover, has helped me understand what does and doesn’t work in the context of the commission.

Scientists are also angry that the commission plans to take €2.7 billion from H2020 to finance the EFSI. Although some of this might be used to support research infrastructure and commercialization, how do you respond to suggestions that in practice this money will be lost to research?

I was a bit puzzled when opinion-makers started saying that the money had been lost to science. That isn't the case. The big picture is that we need to increase the total amount of money spent on science and innovation in Europe in the next five years, and it doesn’t matter where exactly the money comes from. The EFSI is a way of leveraging more from the European Investment Bank, from member states or from private investors. Unlike H2020 projects, which are not geared to the possibility of failure, EFSI-funded projects will be high-risk and high-return. They will be attractive to investors because the first investment loss will be carried by the commission’s contributions. Scientists shouldn’t be concerned that they would be too small to compete for funds, because ESFI projects can be all shapes and sizes, including research infrastructures.

The two €1-billion EU flagship projects were also conceived as high-risk, high-return projects. The project to commercialize graphene is going well, but the Human Brain Project is in trouble. Do you think this particular funding model has been too risky?

We believe in both of the current flagships; measures are being taken to correct some of the problems that have arisen, but it is important that they both keep going. We have no plans to launch more on this scale. My own priority is to support our more modest Key Enabling Technologies projects, which allow us to spread funding over a wider diversity of themes from nanotech to biotech.

What are your priorities?

First, there is the day-to-day implementation of H2020. It is one of the biggest research programmes in the world, and a huge responsibility.

Then there is scientific diplomacy. Fundamental research is a flagship of diplomacy — it is a language of peace, because scientists are not interested in politics, they just want to solve problems. Take one example: we just signed an association agreement for H2020 with the Ukrainian government. For them it is a bridge to Europe. H2020 is an open programme, so individual scientists even in countries without such an agreement (such as Russia) can participate provided they have the excellence. But a government-level association agreement is different; it involves having a say in the direction of the programme, just as Israel and Switzerland enjoy.

And third, there is the research ecosystem. As an economist, I am aware that every country has to have the necessary framework conditions for science — functioning labour markets, product markets and judiciaries and so on. I spend a lot of time talking to other commissioners, including those in charge of budgets and regulations, to see how we can improve our own regulations, and encourage member states to improve their regulations, to get better conditions for science. Consider the fact that Portugal and the UK spend similar amounts on research in relation to their GDPs, but the proportionate scientific output of the UK is much higher because its ecosystem is research-friendly. We’ve already made recommendations to 15 countries on what we’d like them to do to improve their regulatory environment; we want no barriers for scientists.

The aim of the European Research Area (ERA) was also to create a barrier-free environment for science in the region. But although EU member states have supposedly signed up to it, little has happened. Why?

The ERA is seen as a Brussels-driven process, but it is member states that will have to take the actual initiatives, and we can’t force them. The whole process has been disappointingly slow, but the commission has now set deadlines. It has asked each member state to create a road map of how they plan to achieve the ERA targets before mid-2015. Germany has been the first to do so, and has set aside funds to carry it out. Theirs is a good model. We will name and shame the member states that don’t meet our deadline. In particular, I want to see member states guarantee transparency in scientific and academic appointments, as well as a gender balance. And I’d like the member states to align their research agendas so we get a good level of synergy across Europe.

H2020 is different from previous programmes because it is organized around ‘grand societal challenges’, such as health, the ageing population and climate change. This structure requires deep interdisciplinarity. Some researchers have found that hard to engage with: is it working?

Everyone realizes that the grand challenges can’t be solved by one group. Take health: big data can help doctors in ways that they could never have imagined, but to make this real, collaborations are needed that bring together biomedical researchers with computing experts who can build the necessary digital platforms. And, critically, the mix will also need social scientists who can ensure doctors and patients are going to be comfortable with the ‘digital health agenda’.

It is clear to us that social scientists, from anthropologists to cultural-heritage experts, will have a huge contribution to make in virtually all of the societal challenges, because the societal impacts are going to be far-reaching and public acceptance crucial. I believe such interdisciplinary teams get better results — but I know they take time to get working. It requires scientists to change their mindsets and mentality and social scientists to get out of their silos and join the challenges that society has identified as important. The results of our first call shows that we haven’t so far quite managed to really embed social scientists into H2020.

What else has changed in the commission's research agenda?

The commission has a new focus on research integrity. We are sensitive to the fact that we are dealing with taxpayers’ money and have the responsibility to ensure that it is being spent appropriately. We want to develop new, independent guidelines on what research integrity means. The only instrument we currently have to deal with transgressions is within our financial fraud strategy, but that may not be enough.

What keeps you awake at night?

I like to joke that I sleep like a baby — I wake every hour and cry! But seriously, the responsibility for spending so much taxpayers’ money properly does sometimes keep me from sleep. In five years’ time, will people look back and see that I have been able to get more resources for research and innovation in Europe, made more impact in getting science closer to the market, improved the lives of scientists? That’s what I want to be remembered for, but the challenges are huge.