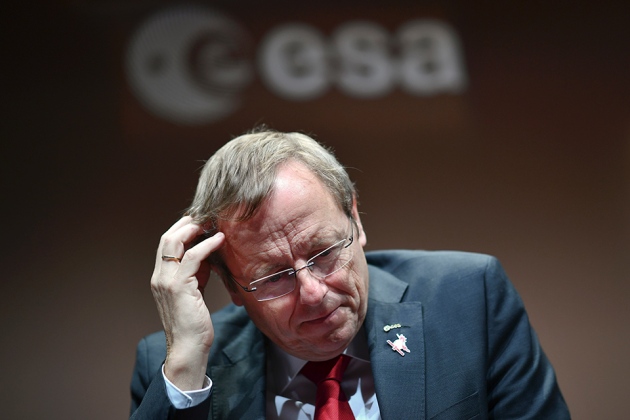 Hopes are fading for a European probe that was scheduled to land on Mars on 19 October.

Schiaparelli, a craft operated by the European Space Agency (ESA), was supposed to touch down on the red planet at 14:48 UTC, in what would have been a first for the agency.

But despite the probe waking up as scheduled and broadcasting from its descent phase, its signal disappeared at some point during its complex six-minute landing procedure. ESA scientists have yet to unravel what happened, but admitted that the situation did not look good. ”It’s clear that these are not good signs, but we need more information,” said Paolo Ferri, head of mission operations at the European Space Operations Centre (ESOC) in Darmstadt, Germany, in a briefing.

The lander is just one part of the ExoMars 2016 mission, which ESA is jointly operating with the Russian space agency Roscosmos. The other half, the ESA-designed Trace Gas Orbiter (TGO), successfully entered Martian orbit to the glee of ESOC engineers, who celebrated with hugs and high-fives. "It looks very good for the TGO mission around Mars," said Michel Denis, flight director for ExoMars.

Ahead of the landing, confidence had been high at mission control. Denis even joked that the landing would be "six minutes of serene waiting", in contrast to the 'seven minutes of terror' coined to describe the landing of NASA’s Curiosity rover in 2012.

After the ill-fated British-led and ESA-operated Beagle 2 mission, which famously disappeared during its landing on Christmas Day 2003, ESA scientists tried to make sure that whatever happened, they would have data about Schiaparelli’s landing. This included the craft having constant contact with Earth through the Giant Metrewave Radio Telescope in Pune, India, and beaming precise details of the descent to its mothership.

The landing had multiple stages, including slowing on entry into Mars’s atmosphere, deploying a parachute, using thrusters to decelerate and finally landing on an impact-absorbing base. Live tracking of the lander initially showed the probe descending, but its signal apparently disappeared just moments before impact. A relay of the same signal beamed back an hour later by Mars Express — an existing ESA orbiter — also showed the descent, but remained inconclusive as to whether Schiaparelli had landed safely.

NASA's Mars Reconnaissance Orbiter was due to pass overhead and communicate with Schiaparelli in the following hours, and if the uplink had worked, ESA had been expected to broadcast a status update at 18:27 UTC. However, neither ESA nor NASA have reported that this was successful.

In Pasadena, California, planetary scientists nervously awaited the signal at a watch party hosted at a meeting of the American Astronomical Society's Division for Planetary Sciences and the European Planetary Science Congress. Failure "would be a drawback", says Norbert Krupp, a researcher at the Max Planck Institute for Solar System Research in Goettingen, Germany. He is involved in the 2020 rover mission and says that a successful Schiaparelli landing would set the stage for those operations. "It's very important that the first step will go right."

A Schiaparelli failure will affect plans for the 2020 mission, “but not dramatically", ESA planetary scientist Olivier Witasse told reporters at the meeting. Many technologies have been redesigned for the rover's landing system, he said. "It's not a one-to-one reuse of technology."

All is not lost

It is clear that ESA is not giving up on the craft quite yet. Ferri said in a briefing that there could be many reasons for the signal to be lost, and that the TGO mothership had recorded housekeeping data about the lander.

He also stressed that the point of Schiaparelli was to learn about landing on Mars, and that even if the probe did not land successfully, ESA could still learn from the experience. “We should remember, this landing was a test, and the point of the test is you want to know what happened,” he said.

NASA’s Opportunity rover, which was parked just 15 kilometres outside the landing zone, was to attempt to take time-lapse pictures of the parachute descent. Whether it was able to capture the images will depend on the exact trajectory Schiaparelli took.

If the probe is still working on the surface, it will have between three and ten days’ worth of battery life, providing multiple opportunities to re-establish a communication link with one of three satellites currently orbiting Mars.

As of the morning of 20 October, ESA had still not heard from the probe. In an ESOC press briefing, ESA's head of solar and planetary missions, Andrea Accomazzo, said that Schiaparelli had entered Mars’s atmosphere as expected and deployed its parachute, meaning that its heat shield worked “flawlessly”. At the point at which Schiaparelli released the parachute, things went off script in some way, and its radio signal disappeared around 50 seconds before its planned landing. The retro thrusters fired, but for just 3 or 4 seconds, much shorter than the 30 seconds expected.

Accomazzo added that there were multiple explanations for what could have gone wrong, including that the parachute detached either too early or too late, leaving the craft too high or too low. Further data processing should show how fast Schiaparelli was going when it touched the ground. “We should be able to detect whether there was a hard signal of touchdown,” said Accomazzo.

Schiaparelli (named after Giovanni Schiaparelli, an Italian astronomer who mapped Mars's surface from Earth in the nineteenth century) is designed to test landing technology ahead of the ExoMars 2020 rover mission. The rover is equipped with a 2-metre drill to hunt for signs of ancient life on the red planet.

But Schiaparelli, which is about the size of a Smart car, had also planned to conduct a two-to-four-day science mission, studying the red planet's dust storms, electric field and weather.

ESA scientists will take joy from knowing that the TGO — which is by far the more scientifically important part of the mission — is safe and sound. Starting in March 2018, it will investigate the possible biological or geological origins of Martian gases, including methane. Before then, the craft must manoeuvre itself into a circular, 400-kilometre-high orbit, including by braking against the Martian atmosphere over a period of months.

If Schiaparelli survives unscathed, it will be the first non-NASA probe to operate successfully on the red planet. (Mars 3, a 1971 Soviet Union probe, failed after 20 seconds on the surface.) But ESA may now have to wait until 2020 for that accolade.

This article was updated with details from the 20 October briefing.