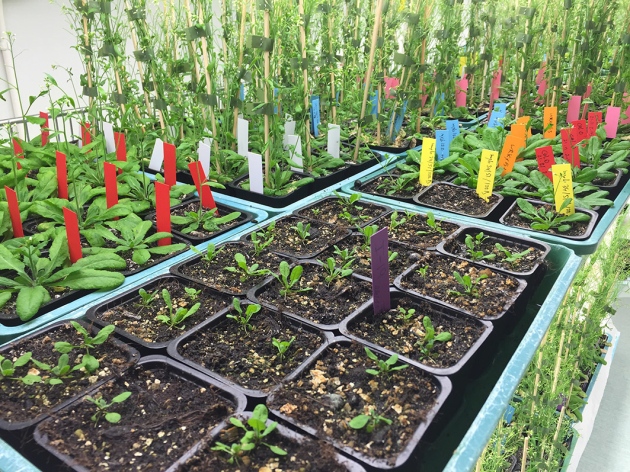 Stefan Jansson’s genetically edited thale cress (Arabidopsis) at the University of Umeå. The European Commission has not yet decided if such plants should be regulated as GM organisms.

Plant geneticist Stefan Jansson is champing at the bit to start field trials on crops tweaked with powerful gene-editing technologies. He plans to begin by using edits to study how the cress plant Arabidopsis protects its photosynthetic machinery from damage in excessively bright light.

But the future of his work depends on the European Commission’s answer to a legal conundrum. Should it regulate a gene-edited plant that has no foreign DNA as a genetically modified (GM) organism?

Jansson, who works at Umeå University in Sweden, says that he will drop his experiments if the plants are classed as GM, because Europe’s onerous regulations would make his work too expensive and slow. He and many others are anxiously awaiting the commission’s decision, which will dictate how they approach experiments using the latest gene-editing techniques, including the popular CRISPR–Cas9 method.

The commission has repeatedly stalled on delivering its verdict, which will apply to edited animals and microorganisms as well as plants. It now says that it will make its legal analysis public by the end of March. Swedish authorities, meanwhile, have told Jansson that unless the commission specifies otherwise, they will not require his cress to be subject to GM regulations.

The legal limbo is having a big impact on research, says René Smulders of the plant-breeding division at Wageningen University and Research Centre in the Netherlands. He says that this year, he was rejected for a European Union grant — on changing the composition of a plant’s oils by editing a gene — because referees were concerned about the legal uncertainty. “Some scientists hesitate to start using the new methods in case they end up being regulated and their research projects hit a dead end,” he says.

At issue is the interpretation of a 2001 European Commission directive on releasing GM organisms into the environment, which covers field trials and cultivation. It defines GM organisms as having alterations that cannot occur naturally, which were made by genetic engineering.

What is unclear is how this relates to experiments, such as Jansson’s, in which researchers introduce foreign DNA to direct a precise edit in a plant’s own genetic material but then use selective breeding to remove the foreign gene. The final plant has a few tweaked nucleotides, but cannot be distinguished from a wild plant that might have acquired the same mutation naturally — so it cannot be traced in the environ­ment as EU regulations require.

Many EU member states — including Sweden — have conducted their own analyses of the directive, and argue that it should not apply to edited plants that do not contain foreign DNA. But some non-governmental organizations (NGOs) hostile to genetic manipulation have produced analyses that conclude the directive should apply because genetic engineering is involved.

Academic scientists and seed and crop companies fear that plants made with the latest gene-editing techniques may share the fate of conventional GM plants in Europe. Strict regulations, cumbersome bureaucracy and activism against GM organisms have meant that scientists in some countries, such as Germany, do not even attempt field trials. The regulations have increased the costs of bringing a GM crop to market, and many European nations do not allow such crops to be cultivated at all. That is frustrating for plant scientists who want their work to be useful to the world, says Jonathan Jones, a plant researcher at the Sainsbury Laboratory in Norwich, UK.

“We hoped that the new plant-breeding techniques would offer ways of achieving the same outcome without the onerous regulations — and fear that might not turn out to be the case,” he says.

Many countries outside Europe do not face the same uncertainty, because they regulate GM organisms according to the nature of the product, not how it was made. In the United States, gene-edited crops containing no foreign genetic material are assessed on a case-by-case basis. In 2004, the biotechnology company Cibus, based in San Diego, California, was told that the US Department of Agriculture would not need to regulate its herbicide-resistant oilseed rape, made with an earlier form of gene-editing. Its crop is now cultivated in the United States. (The White House did, however, begin a review of all US biotechnology regulation in July.)

Since 2011, Cibus has asked six countries — Finland, Germany, Ireland, Spain, Sweden and the United Kingdom — whether they would consider its crop to come under the scope of the EU directive. Without guidelines from the commission, each conducted its own analysis and said that it would not. Cibus has now done field trials in the United Kingdom and Sweden, but it put its activities on hold after the commission sent a letter to all EU member states on 15 June, asking them to wait for its legal interpretation.

Whatever the commission decides, it is likely that either a member state, an NGO or a company will sue — meaning that the European Court of Justice may make the final, binding decision on the matter.

Many plant scientists do basic research, so their gene-edited plants never need to leave the greenhouse. But Jansson must plant his cress outside to test its photosynthetic abilities in natural conditions. With his country’s approval, he plans to plant the crop in the spring. “Lawyers talk and talk — I think it is important for Europe to have a test case,” he says.