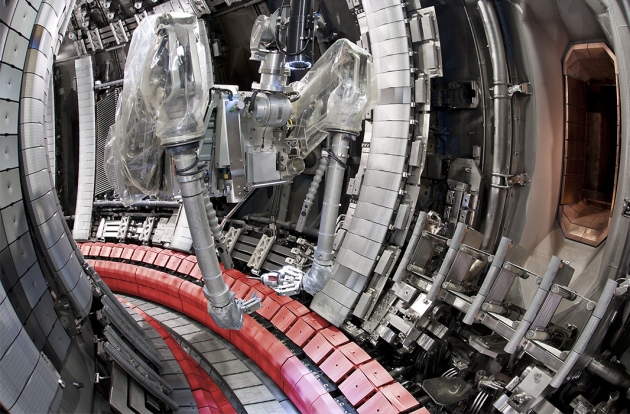 Fusion reactors use divertors (tinted red in this picture) to dissipate waste heat.

Fusion energy holds the tantalising promise of limitless, clean electricity for humanity — but colossal engineering problems must be solved first. Among them: how to deal with the scorchingly hot exhaust from a fusion power plant’s plasma fuel. But scientists don’t agree on the best way to study the issue.

Italian researchers want to test novel exhaust systems in a new €500-million (US$570-million) nuclear fusion reactor that they hope to start operating around 2025. Yet last monthEUROfusion, a European consortium of fusion-research organizations, opted to postpone for half a decade a decision on whether to contribute funds for the experiment. That leaves Italy, for now, having to go it alone. “All the risks are on the Italian side,” says Tony Donné, EUROfusion’s programme manager.

Inside a doughnut-shaped tokamak — the leading model for a practical fusion reactor — a plasma of hydrogen isotopes is compressed and heated to hundreds of millions of degrees so that the nuclei fuse, generating energy. Magnetic fields hold the plasma in place, but some hot particles inevitably leak and drift towards the tokamak’s wall, dumping huge amounts of energy and eroding its surface. So the fields are shaped to channel leaks to a metal divertor, which dissipates heat by transferring it to a coolant.

ITER, the giant €20-billion fusion reactor under construction in southern France to demonstrate fusion technology, will have a divertor made of stainless steel coated with tungsten. But ITER would generate energy only in bursts of a few minutes. By contrast, the planned DEMO reactor, which would be built after ITER to show that fusion can supply electricity to the grid, would need to operate more or less continuously. It’s not clear whether conventional divertors could deal with the greater heat load.

Enter the Divertor Tokamak Test facility (DTT): a fusion reactor that would have a plasma volume only 4% that of ITER's but that would have space to test different ways to divert waste heat1. For example, it could test differently-shaped magnetic fields and divertors to spread the particle load over a larger surface, or could try out materials that might be less susceptible to damage, such as liquid lithium.

Physicist Flavio Crisanti of ENEA, Italy’s energy and technology agency, which is leading the DTT’s design, says the project is an important stepping stone to DEMO. EUROfusion agrees, but thinks that funding the expensive new facility would be premature. At its general assembly meeting in April, the organization approved funding for five other projects on plasma exhaust, most involving upgrades of existing facilities to study specific divertor designs.

That decision followed an expert review that recommended delaying EUROfusion support for the DTT until some of the smaller facilities yield results, which should make clear which design is most promising. It might even be possible to use a conventional divertor in DEMO if it is protected by a layer of gas, such as neon, that could help to dissipate energy by colliding with the hot plasma waste.

A machine that tries to do it all

Other researchers also have reservations about the DTT. Brian LaBombard, a physicist at the Massachusetts Institute of Technology in Cambridge, says that the DTT’s scale “speaks to the severity” of the plasma-exhaust problem, but is scientifically unnecessary. “It is a machine that tries to do it all,” he says.

He and his colleagues have proposed an as-yet-unfunded Advanced Divertor Experiment. At an estimated US$70 million, it would be far cheaper than the DTT because, unlike the Italian design, it would not use superconducting cables to create its magnetic fields and would have a smaller plasma core, but it would still have space to test alternative divertors.

At a workshop in June in Frascati, Italy — the home of ENEA’s fusion laboratory — EUROfusion agreed “in principle” to commit €60 million to the DTT in five or six years’ time, irrespective of the other experiments’ results. However, it will provide the money only if ENEA shows that the DTT can be flexible enough to accommodate a range of possible divertors; the agency must also make good progress on construction over the next few years. EUROfusion will still need to approve that commitment at its general assembly in October.

Crisanti says ENEA hopes to secure a €250-million loan for the facility, possibly from the European Investment Bank, as well as some €120 million from Italy’s central government and further money from regional governments and China. He aims to get Italian government approval by the end of 2017.

Italy has a political reason to urgently support the project, Crisanti adds: it is keen to maintain the status of Italian manufacturers of superconducting cables, control systems and robotics. “If we wait for a few years, companies in other countries might overtake them,” he says.