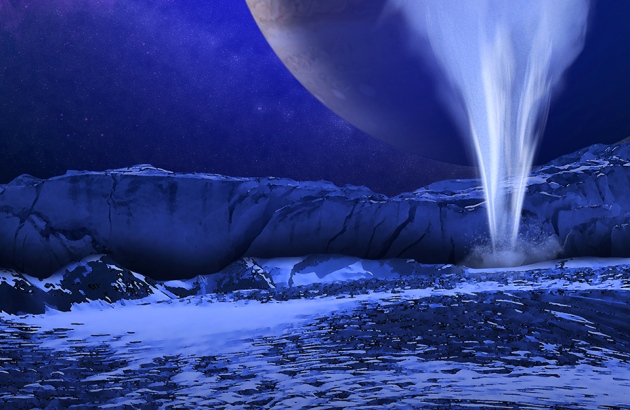 Scientists speculate that the plumes could be tapping into an ocean buried beneath kilometres of ice. That would make them a direct conduit to a realm that could support life. Researchers have suggested that future spacecraft would be able to study that ocean by looking at the material splattered across Europa's surface by the plumes. Saturn's moon Enceladus has similar watery jets.

Despite numerous attempts2, however, plumes on Europa had not been confirmed until now. “Previously there’s been just one piece of evidence that these things exist,” says team leader William Sparks, an astronomer at the Space Telescope Science Institute in Baltimore, Maryland. “If they’re real, they have to be intermittent.” Factors as varied as the time of day or the tidal pull of Jupiter could cause the plumes to appear and disappear.

Sparks and his colleagues watched Europa pass across the face of Jupiter 10 times while looking for signs of ultraviolet emissions from the moon’s atmosphere. Of those 10 passages, three — in January, March and April 2014 — showed hints of plumes. Most of them are clustered around Europa’s southern hemisphere, the scientists report in a paper to appear on 29 September in the Astrophysical Journal. 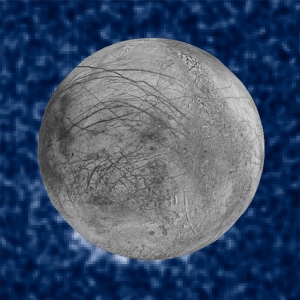 Composite image of one of the newly observed plumes (lower left) on Europa.

Lorenz Roth, who led the team that made the 2013 report, which also used data collected by Hubble, says the newly reported jets do not seem to be in the same location as the previous sighting. “Unless something appears very close to the south pole, it can hardly be the same plume,” says Roth, at the Royal Institute of Technology in Stockholm. He also notes that, in order for Sparks's team to observe these plumes against Jupiter's face, the material in them would have to be extremely dense. That means there is a lot of water in these jets, which begs the question, why has no one seen these before the 2013 report, he says.

Sparks and his colleagues have observed two additional passes of Europa across the face of Jupiter since their 2014 observations, but have not finished analysing that data to see if they also captured plumes. “We are working at the limits of Hubble’s unique capabilities,” he says.

Future missions that might spy the plumes up close are the European Space Agency’s JUICE mission, slated for launch in 2022, and a possible NASA spacecraft to Europa to launch in roughly the same time frame.