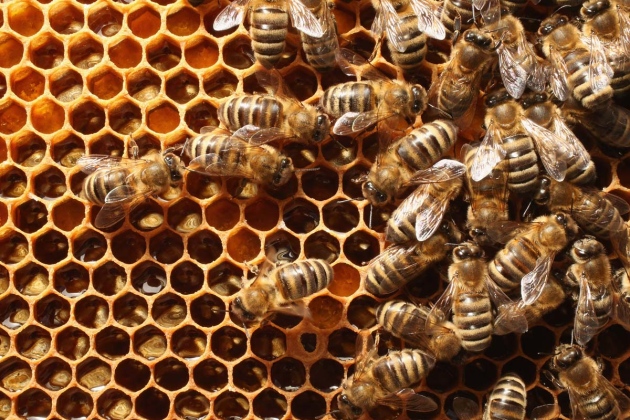 No consensus has been reached yet on what causes the unusual loss of honeybee colonies, but 'colony collapse' does not occur in all countries or on all years.

The first major Europe-wide survey of honeybee colonies has revealed that some countries are losing as many as one-third of their colonies every winter, but the result is still better than some feared.

Declines in bee numbers have received huge public attention in recent years, with numerous hives succumbing to ‘colony collapse disorder’. The blame has been pinned on parasites, insecticide use and changed farming practises. But detailed information on the true level of decline in bee numbers has been scarce.

At a high-level conference in Brussels on 7 April, the European Union Reference Laboratory for honeybee health, based in Sophia Antipolis, France, revealed the results of its survey of 17 European Union member states. Stemming from more than 8,500 visits by 1,354 inspectors to apiaries between autumn 2012 and summer 2013, the survey reports wide variation in winter mortalities, ranging from 3.5% in Lithuania to 33.6% in Belgium.

Marie-Pierre Chauzat, a pathologist at the laboratory, told the meeting that the acceptable death rate for normal beekeeping conditions was a matter of debate: some think it should be 10%, and others, 15%. Under the more lenient threshold of 15%, 10 of 17 countries would qualify as having good bee health, but Belgium, Denmark, Estonia, Finland, Sweden, Latvia and the United Kingdom would exceed it. 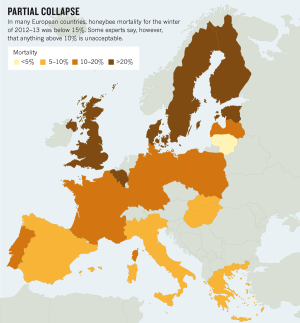 However, says Chauzat, “we think that the threshold should be 10%”. If that is the case, then the honeybee death rate is unacceptable in almost two-thirds of the member states. “There are a lot of countries that are above this threshold. “We’re not happy to see that,” Chauzat says.

She cautions, however, that this is just one year of data, and that follow-up work is needed. And the figures have been taken as a positive sign by some researchers and politicians, who feared that the problem would be worse, as it appears to be in other parts of the world.

In another presentation at the meeting, Jeffery Pettis, head of bee research for the US Department of Agriculture in Beltsville, Maryland, showed that the United States had found a colony-loss rate of 31%, and that rates had exceeded 30% for five of the past seven years. “We’re using 15% as an acceptable rate,” he says. “We’ve been doubling that rate for the past few years, and it really is unacceptable.”

Concerns about other pollinators were also raised at the EU meeting. Simon Potts, a bee researcher at the University of Reading, UK, took part in an analysis of the status of European bumblebees under the auspices of the International Union for Conservation of Nature's ‘red list’ of endangered species. That work — released earlier this month — found that almost one-quarter of the 68 European bumblebee species are threatened with extinction.

Despite these gloomy numbers, Potts says that there are reasons to be more hopeful now. A study published last year found that the rate of decline in European bee species was slowing1, and evidence is accumulating for which interventions — such as planting flowers — actually work to encourage bees2.

Added to the growth of good research, is an increase in political will, as exemplified by the meeting.

“I think we’re at a real turning point now,” says Potts. “Everything is ripe. If we don’t get it right now, that’s it.”