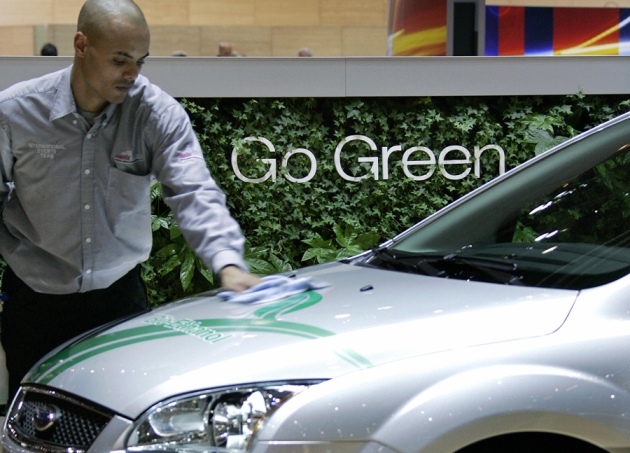 Bioethanol-fuelled cars are rarer in Europe than those that run on biodiesel, although ethanol is greener.

The European Union (EU) has spent the past 10 years nurturing a €15-billion (US$20-billion) industry that makes transport fuel from food crops such as soya beans and sugar cane in the hope of cutting greenhouse-gas emissions. Yet for more than half a decade, scientists have warned that many food-based fuels might actually be boosting emissions relative to fossil fuels.

Now the EU could change course by setting a cap on the use of food-based biofuel, but pressure from industry, farming and energy lobbies threatens to limit the reversal. Tensions are rising over how much of the emerging science on biofuel emissions will be included in EU policy ahead of a vote on 10 July by the key European Parliament committee dealing with the legislation.

Europe began mandating the development and use of biofuels in 2003. The two latest laws on the subject, passed in 2009, require a 6% drop in the carbon footprint of transport fuel by 2020, by which time renewable energy must fuel 10% of the transport sector. Biofuel counts towards that requirement if it produces a 35% emissions saving over fossil fuels, or 50% from 2017 onwards; so far, most of that fuel has come from food crops, helping to generate a thriving bio­fuels industry based mainly on biodiesel. Europe is even importing rapeseed and vegetable oil to meet demand.

But the original accounting for biofuel emissions was all wrong, as Tim Searchinger, who studies environmental economics at Princeton University in New Jersey, noted in an influential 2008 article (T. Searchinger et al. Science 319, 1238–1240; 2008). He and his colleagues found that when agricultural land is used to plant biofuel crops, fresh land may be ploughed up to accommodate the existing crops that have been edged out. Ultimately, that may drive clearing of forests, peatlands and wetlands rich in sequestered carbon — causing large emissions of carbon dioxide. “It’s kind of obvious if you think about it,” says Searchinger. 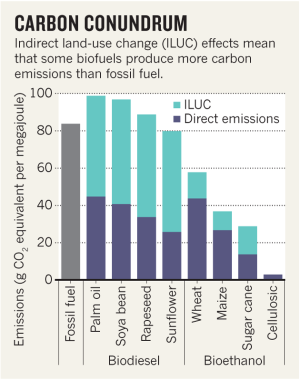 Calculating this ‘indirect land-use change’ (ILUC) effect is complicated, because it is based on economic models projecting behaviour 10 or 20 years into the future. The numbers are different for different crops (see ‘Carbon conundrum’). But overall, when land-use effects are taken into account, most varieties of biodiesel turn out to produce more emissions than bioethanol — and often more than fossil fuels.

The effect wipes out more than two-thirds of the carbon emissions that Europe’s renewable-energy policy was supposed to save by 2020, says David Laborde, a researcher at the International Food Policy Research Institute (IFPRI) in Washington DC, which has produced influential reports for the European Commission.

In the United States, the Environmental Protection Agency did take the land-use effect into account in 2010, when it set standards for which fuels count as renewable. Luckily for US farmers, ethanol from maize (corn) — the main biofuel for US vehicles — was given the green light under the agency’s rules.

But the European Commission has ducked the issue in the face of strong resistance from the biofuels industry and Europe’s energy and agricultural sectors.

In October 2012, the commission finally proposed that food-crop fuel quotas be capped at only 5% of transport fuel by 2020 — half of the 10% renewables target — effectively allowing existing facilities to continue recouping investment, but stopping further expansion.

“I think they got it exactly right: the answer is to stop,” says Searchinger. Under the proposal, land-use figures would not be used to select one biofuel over another. But fuel suppliers would have to start including land-use figures produced by the IFPRI when they report the total emissions of their fuels, a hint that the official carbon footprint of Europe’s transport fuel might eventually incorporate that science.

The European Parliament now gets to battle over the commission’s proposals. On 20 June, its energy committee voted to push the cap on food-crop fuels up slightly, to 6.5%. It also removed the stipulation that fuel suppliers report emissions using land-use change figures. Instead, the committee proposed gradually increasing mandates for use of advanced biofuels not made from food crops.

“The science of ILUC is not robust enough for policy,” argues Clare Wenner, head of renewable transport policy at the UK Renewable Energy Association in London. But Europe’s Joint Research Centre in Brussels says that the models used to calculate the land-use numbers are no less certain than the accepted science on the direct emissions of biofuels — and urges that they be included. The environment committee will vote on its preferred policy on 10 July: its lead negotiator on this issue, Corinne LePage, agrees with the Joint Research Centre and is pushing to incorporate land-use change numbers to distinguish between better and worse food-crop biofuels. But she may not get her way.

The battle does not end there: the main parliament will vote on the issue in September, based largely on what the environment and energy committees recommend. Then Europe’s energy ministers will have to reach a compromise on the legislation. Some countries — such as the United Kingdom, the Netherlands and Denmark — want land-use factors to be included, whereas others, including central and eastern European countries with strong biofuel lobbies, do not. Although this month’s vote will lay out the main lines of argument, it is conceivable that nothing will be agreed until 2014 — when European Parliament elections in May could set negotiations back to square one. “It’s head-bangingly complicated,” says Wenner.