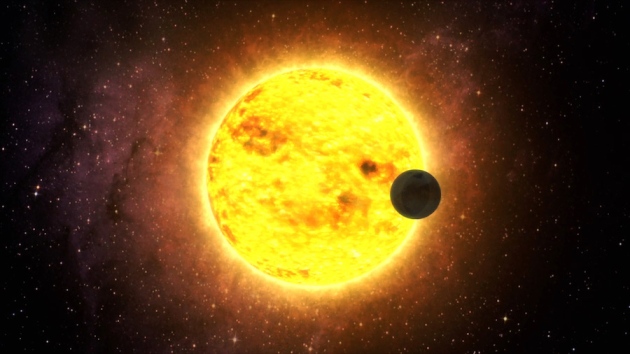 Alien astronomers could be watching for the 'blink' as Earth passes in front of the Sun, a technique researchers here use to spot alien worlds.

By watching how the light dims as a planet orbits in front of its parent star, NASA’s Kepler spacecraft has discovered more than 1,000 worlds since its launch in 2009. Now, astronomers are flipping that idea on its head in the hope of finding and talking to alien civilizations.

Scientists searching for extraterrestrial intelligence should target exoplanets from which Earth can be seen passing in front of the Sun, says René Heller, an astronomer at the Max Planck Institute for Solar System Research in Göttingen, Germany. By studying these eclipses, known as transits, civilizations on those planets could see that Earth has an atmosphere that has been chemically altered by life. “They have a higher motivation to contact us, because they have a better means to identify us as an inhabited planet,” Heller says.

About 10,000 stars that could harbour such planets should exist within about 1,000 parsecs (3,260 light years) of Earth, Heller and Ralph Pudritz, an astronomer at McMaster University in Hamilton, Canada, report in the April issue of Astrobiology1. They argue that future searches for signals from aliens, such as the US$100-million Breakthrough Listen project, should focus on these stars, which fall in a band of space formed by projecting the plane of the Solar System out into the cosmos. Breakthrough Listen currently has no plans to search this region; it is targeting both the centre and the plane of our galaxy, which is not the same as the plane of the Solar System, as well as stars and galaxies across other parts of the sky.

The idea of searching for worlds whose inhabitants could see Earth transits dates back to at least the 1980s. But astronomers can now update and revise their ideas thanks to what they have learned from Kepler, Heller says.

The zone of space in which Earth transits would be visible is a relatively narrow strip. It gets even narrower if restricted to geometries in which the Earth passes less than half a solar radius from the Sun’s centre — which gives a transit that should be easily visible, if aliens have a tool similar to Kepler.

Heller and Pudritz went through a catalogue of stars compiled using data from the Hipparcos satellite and found 82 Sun-like stars in this zone that are within 1,000 parsecs of Earth. Because not all of the stars in this region of space have been discovered, Heller and Pudritz extrapolated the number of known stars to the number that probably exists and came up with roughly 10,000 candidate stars. If these stars have planets, and if the planets have intelligent life forms, they could have long ago spotted the blink of an Earth transit and begun beaming signals towards us, Heller says.

One of the closest known stars in the zone is Van Maanen’s Star, only 4 parsecs away. It is a white dwarf star, the remains of a stellar explosion, and may or may not have planets orbiting it. But if they did exist, they would provide a ringside seat for watching Earth. “If any civilization survived the death of their star, they could see us transiting our own Sun,” says Heller.

For four days in 2010, the Allen Telescope Array in northern California looked for signals coming from the region of space directly opposite the Sun, says Seth Shostak, an astronomer at the SETI (search for extraterrestrial intelligence) Institute in Mountain View, California. The goal was to test whether extraterrestrials might be timing any transmissions to reach Earth just as they see it transiting the Sun. No signs of aliens were found, and no follow-up is planned.

“Unfortunately, there are more good ideas for SETI experiments than there are SETI experimenters to act on them,” says Andrew Siemion, an astronomer at the University of California, Berkeley.

In the next five or so years, the European Space Agency's Gaia satellite is likely to discover most of the nearby stars in the Earth transit zone, Heller says. Until then, he and Pudritz plan to use data from K2, the Kepler follow-on mission, to hunt directly for planets in the zone — and to look for aliens who might be looking for us.