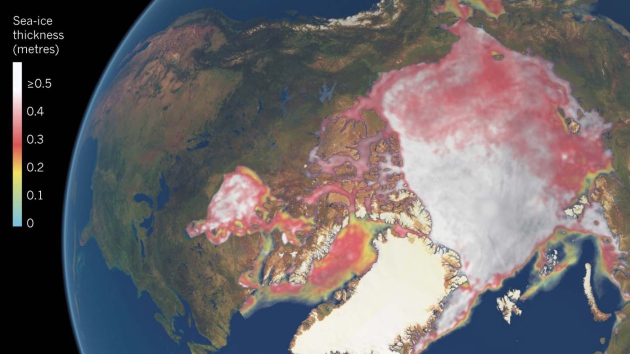 Snow, trees or the air we breathe? Europe’s environmental research community is facing the difficult task of settling which of the three should be the priority for Europe’s next Earth-observing satellite.

Around 250 Earth scientists and climate researchers will meet in Graz, Austria, this week to weigh up the scientific benefits of projects proposed for the roughly €300-million (US$390-million) seventh Earth Explorer mission of the European Space Agency (ESA).They face a choice between three projects — Biomass, PREMIER and CoReH2O (an acronym referring to cold regions and water) — preselected through peer review from more than 20 proposals. The scientists behind the missions have been preparing their proposals for years.

The Biomass project aims to take radar measurements of global forest biomass to assess terrestrial carbon stocks and fluxes. CoReH2O, also a radar mission, would measure snow cover and snow-melt rates in cold regions around the world. Finally, PREMIER would use infrared and microwave sounding to measure atmospheric composition and temperature in the upper troposphere and lower stratosphere, a region particularly important for climate.

No satellites currently in orbit can match the sensitivity of the proposed missions. Neither NASA’s Landsat programme, which has captured images of Earth since 1972 (see Nature 494, 13–14; 2013), nor Japan’s Advanced Land Observing Satellite-2 — to be launched later this year — have sensors that can measure forest biomass with the precision of Biomass, for example. And climate scientists have been warning of an impending data crisis after the 2010 retirement of NASA’s ICESat mission, which among other things monitored ice sheets and vegetation, and the failure of the agency’s Orbiting Carbon Observatory and the solar monitoring and aerosol mission Glory (see Nature http://doi.org/bqjhn7; 2011).

Once ESA has decided which it will back, a satellite could be ready for launch by the end of the decade. Science will be the main criterion for the decision, but cost and the maturity of the technology will also play a part. The stakes are high, says Thomas Stocker, a climate researcher at the University of Bern, and a co-chair of a working group of the Intergovernmental Panel on Climate Change. “Findings such as those concerning ice-sheet changes in Greenland and Antarctica would have been impossible without space observations,” he says.

Europe currently has three Earth Explorer satellites in orbit: GOCE is mapping tiny variations in Earth’s gravity field, which can reveal changes in ice mass and ocean circulation; SMOS is measuring soil moisture and ocean salinity; and CryoSat-2 is monitoring variations in sea-ice thickness and changes in the mass of large ice sheets and glaciers. Three further missions — Swarm, ADM-Aeolus and EarthCARE — are scheduled for launch over the next three years, and will, respectively, monitor Earth’s magnetic field; global wind profiles; and clouds, aerosols and radiation.

The seventh Earth Explorer mission will provide scientists with yet another set of global data that are hard to come by on the ground. The extent of seasonal snow cover, for instance, is an important feedback in climate change because snow reflects sunlight, cooling Earth’s surface, and affects the supply of fresh water.

“They will want to know what the future might hold for them. That’s why we need these data.”

“More than 1 billion people rely on glaciers and seasonal snow packs for their water supply,” says Helmut Rott, a meteorologist at the University of Innsbruck in Austria and lead scientist on the CoReH2O project. “They will want to know what the future might hold for them. That’s why we need these data.”

But data on global forest biomass — a major store of land carbon and a key indicator of biodiversity — are no less important, says Shaun Quegan, a carbon-cycle researcher at the University of Sheffield, UK, who is part of the Biomass assessment group. In particular, he says, satellite observations are needed to quantify global carbon emissions for tropical forests, for which no reliable ground inventories exist.

Supporters of the PREMIER mission are just as emphatic. It promises knowledge that “is absolutely vital”, says Michaela Hegglin, an atmospheric scientist at the University of Reading, UK, and a member of the mission’s advisory group. To improve regional climate predictions, she says, “we need to better understand how the atmospheric circulation responds to rising greenhouse-gas concentrations”.

No clear front runner has emerged. Whichever proposal prevails at the Graz meeting is almost certain to be funded by ESA. A final decision is expected at the agency’s board meeting in May in Svalbard, Norway, but ESA has backed the verdict of the scientists in the past.

“If I had my way, I would love to see all three missions fly,” Stocker says. But with the economic crisis casting a shadow over Europe’s Earth- and climate-observation plans, there is little chance of that. Spain, France and Italy last year reduced their contributions to ESA, leaving the agency with €600 million less for its 2013–17 Earth-observation budget than it had hoped for. The seventh Earth Explorer mission is safe, says Volker Liebig, director of ESA’s Earth-observation programmes. But tight budgets are likely to shrink the size and ambition of future missions. “We need to make future missions cheaper without impairing the science,” he says.