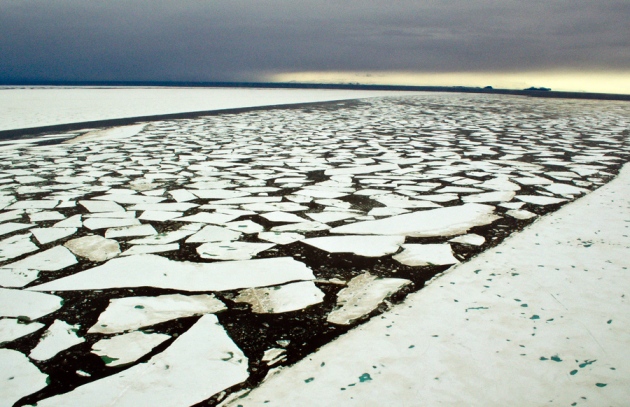 Antarctic sea ice extent has expanded since the 2000s.

Rising temperatures have caused the amount of Arctic sea ice to shrink dramatically since global observations began in the 1970s. But on the other side of the world, sea ice in Antarctica was at first steady — and then began to slowly expand in the mid-2000s.

Some researchers now say that the Antarctic trend may have been inflated by an error in the decades-long record of satellite observations of Southern Hemisphere sea ice1. Scientists process data from microwave-sensing satellites using one of two standard algorithms to distinguish bright sea ice from dark open water.

Researchers led by Ian Eisenman, a climatologist at the Scripps Institution of Oceanography in San Diego, California, discovered a mismatch between an older and a newer version of the same NASA sea-ice data set that occurred when a satellite sensor was replaced in December 1991. Such “jumps” in data are caused by slight differences in the satellites' sensitivity, and are usually corrected when scientists process the data collected by the probes.

But the error that Eisenman identified — reported July 22 in The Cryosphere — wasn't obvious. He found it only by comparing an old version of the data set with a 2008 version, and says that the data were too noisy to tell which version had been mishandled.

The finding raises two possibilities, Eisenman and his colleagues say. Either much of the recent mysterious growth trend is actually spurious, or the current figures are accurate but the trend could have been detected years earlier.

The climate scientist who maintains the data set, Josefino Comiso of the NASA Goddard Space Flight Center in Greenbelt, Maryland, says he is confident that the current data set is correct. Comiso says that he inadvertently introduced a mistake into the record — known as Bootstrap — at some point after 1991, but corrected it unknowingly when he updated the file in 20082.

Comiso and other climate scientists reject the suggestion that his data set may overestimate the recent trend in Antarctic sea-ice growth — by as much as two-thirds, according to Eisenman's analysis. Another NASA sea-ice data set, processed using the other standard algorithm, shows a growth trend similar to that in Comiso's current data.

Paul Holland, an ocean modeller with the British Antarctic Survey in Cambridge, UK, calls the overall growth figure a distraction, and relatively modest. What truly stumps scientists, he says, is the fact that Antarctica experiences huge ice losses and competing gains in different regions, a pattern that is unaffected by this study.

“I don't think this lets us off the hook of explaining how Antarctica's sea ice is expanding in a warming world,” says Ted Scambos, a glaciologist at the National Snow and Ice Data Center in Boulder, Colorado.

There is, however, widespread agreement that the paper demonstrates the importance of detailed recording of updates. In that regard, Holland calls the study “an excellent piece of scientific vigilance”.