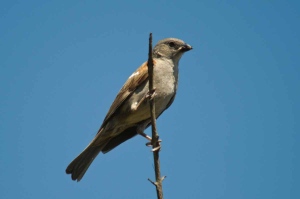 Environmental factors may have given invasive house sparrows a genetic leg up in Kenya.

Two things are thought to be crucial for evolutionary adaptation: genetic diversity and long periods of time, in which advantageous mutations accumulate. So how do invasive species, which often lack genetic diversity, succeed so quickly? Some ecologists are beginning to think that environmental, or ‘epigenetic’, factors might be modifying genes while leaving the genome intact.

“There are a lot of different ways for invasive species to do well in novel environments and I think epigenetics is one of those ways,” says Christina Richards, an evolutionary ecologist at the University of South Florida in Tampa.

Although biomedical researchers have been investigating the links between epigenetics and human health for some time, evolutionary biologists are just beginning to take up the subject. Richards, who helped to organize a special symposium on ecological epigenetics at a meeting of the Society for Integrative and Comparative Biology (SICB) in San Francisco this month, says that the field has the potential to revolutionize the study of evolutionary biology.

The nascent field of ecological epigenetics has plenty of challenges standing in its way. The genomes of most wild animals and plants have not been sequenced so ecologists can’t pinpoint which genes have been modified. And, because they tend to work outside of controlled laboratory conditions, researchers have trouble linking those gene modifications to behavioural changes.

Even so, there are hints that epigenetic diversity could be helping invasive species to thrive. For instance, Andrea Liebl, a fifth-year doctoral candidate at the University of South Florida, studies house sparrows (Passer domesticus) in Kenya, which, as descendants from a single group, have very little genetic diversity. But when Liebl combed the genomes of the birds to look for parts that had methyl groups attached — a key epigenetic marker — she found a high level of variability across populations. Similarly, in the invasive plant Japanese knotweed (Fallopia japonica), Richards found that genetically identical plants — knotweed reproduces clonally — have different leaf shapes and grow to different heights depending on where they live. Like the sparrows, the knotweeds exhibited high epigenetic diversity. Cristina Ledón-Rettig, a molecular biologist at North Carolina State University in Raleigh, who also helped organize the symposium, says that mapping the level of epigenetic modification may reveal  “whether a population is going to tank or survive”.

Some critics aren’t ready to accept the links between epigenetics and invasive species. Jerry Coyne, an evolutionary geneticist at the University of Chicago in Illinois, says their success can be explained by well-established evolutionary theories. Sometimes a species moves into an unoccupied niche, and sometimes a small amount of genetic diversity goes a long way. “It doesn't have to have a lot of variation to evolve,” he says. “We have perfectly good other reasons, which are based on more solid premises, on why invasive species succeed.”

But with the cost of gene sequencing dropping, symposium organizers predict that research into ecological epigenetics is poised to take off. There could be several powerful studies coming out that show “how gene expression changes if the environment changes”, says Aaron Schrey, a population geneticist at Armstrong Atlantic State University in Savannah, Georgia.