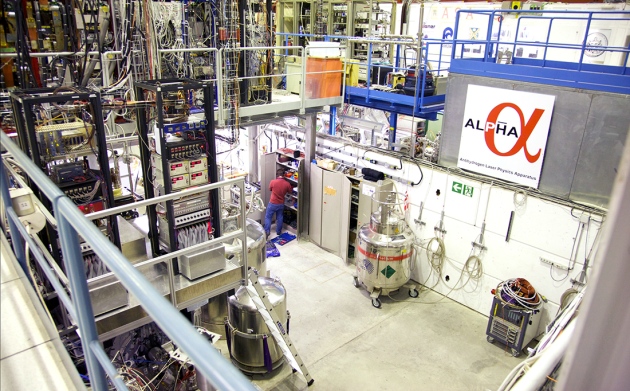 The ALPHA antimatter experiment at CERN has measured an energy transition in anti-hydrogen.

In a technical tour-de-force, physicists have made the first measurements of how antimatter atoms absorb light.

Researchers at CERN, the European particle physics laboratory outside Geneva, trained an ultraviolet laser on antihydrogen, the antimatter counterpart of hydrogen. They measured the frequency of light needed to jolt a positron — an antielectron — from its lowest energy level to the next level up, and found no discrepancy with the corresponding energy transition in ordinary hydrogen.

The null result is still a thrill for researchers who have been working for decades towards antimatter spectroscopy, the study of how light is absorbed and emitted by antimatter. The hope is that this field could provide a new test of a fundamental symmetry of the known laws of physics, called CPT (charge-parity-time) symmetry.

CPT symmetry predicts that energy levels in antimatter and matter should be the same. Even the tiniest violation of this rule would require a serious rethink of the standard model of particle physics.

Randolf Pohl, a spectroscopist at Johannes Gutenberg University in Mainz, Germany, could barely contain his excitement. “WOW,” he told Nature in an email. “After all these years, these guys have finally managed to do optical spectroscopy in antihydrogen. This is a milestone in the investigation of exotic atoms.”

“It is amazing that one can control antimatter to an extent that this is possible,” says Michael Peskin, a theoretical physicist at the SLAC National Accelerator Laboratory in Menlo Park, California.

Studying antimatter is extremely difficult, because it annihilates whenever it comes into contact with ordinary matter. In 2010, CERN’s ALPHA collaboration demonstrated how to hold antihydrogen in a magnetic trap — and since then, have been working towards studying its interactions with light.

Every 15 minutes or so, the ALPHA group can produce around 25,000 antihydrogen atoms. To make them, the physicists combine positrons, emitted by a radioactive substance, with antiprotons, produced by a particle accelerator and then slowed down and cooled.

Most of these atoms are too ‘hot’ — moving too fast, and in too high an energy state — for spectroscopy studies.  So the researchers must let them escape the magnetic trap, leaving just a handful of the slowest, lowest-energy antihydrogen atoms. Perfecting this technique took years, says ALPHA spokesperson Jeffrey Hangst. “Making antihydrogen is relatively easy; making cold antihydrogen is really difficult,” he says.

Finally, the ALPHA team was able to see whether, when the researchers shone a laser at a particular frequency, the antihydrogen atoms would act like their hydrogen counterparts. The group says they do: the energy transition is consistent to a precision of 2 parts in 10 billion, they report on 19 December in Nature1.

“You put so much effort into something, and it finally succeeds. There are almost no words to describe it,” says Hangst.

Next, the researchers hope to probe the antihydrogen with a large range of laser energies. That could provide a more stringent test of matter–antimatter equivalence and of CPT symmetry.

Many theories — such as string theory — that venture beyond the standard model by combining gravity with the three other fundamental forces of subatomic physics, do involve some kind of CPT violation, says Peskin. “So it is not at all clear that CPT is a true symmetry of nature,” he says.

Two other experiments at CERN — called ATRAP and ASACUSA — were competing with ALPHA to measure antimatter spectroscopy. Gerald Gabrielse, the leader of ATRAP and a physicist at Harvard University in Cambridge, Massachusetts, says he first proposed nearly 30 years ago measuring the particular energy transition in antihydrogen that the ALPHA team have reported. “We started ten years earlier and they got to this result first,” he says. ”Congratulations to ALPHA.”