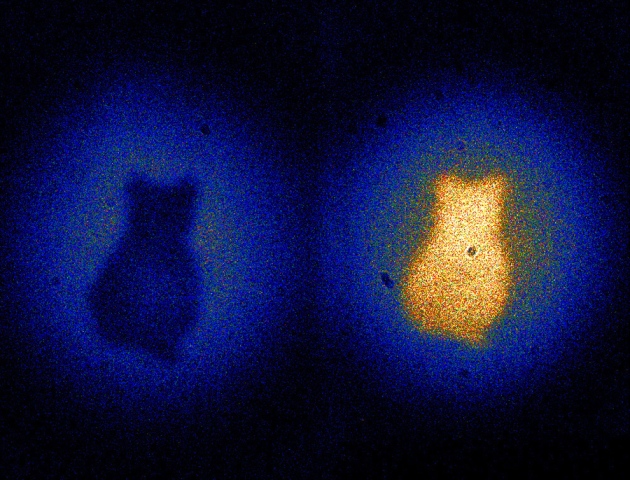 A cardboard cut-out of a cat imaged by photons that never went through the cut-out itself.

Physicists have devised a way to take pictures using light that has not interacted with the object being photographed.

This form of imaging uses pairs of photons, twins that are ‘entangled’ in such a way that the quantum state of one is inextricably linked to the other. While one photon has the potential to travel through the subject of a photo and then be lost, the other goes to a detector but nonetheless 'knows' about its twin’s life and can be used to build up an image.

Normally, you have to collect particles that come from the object to image it, says Anton Zeilinger, a physicist at the Austrian Academy of Sciences in Vienna who led the work. “Now, for the first time, you don’t have to do that."

One advantage of the technique is that the two photons need not be of the same energy, Zeilinger says, meaning that the light that touches the object can be of a different colour than the light that is detected. For example, a quantum imager could probe delicate biological samples by sending low-energy photons through them while building up the image using visible-range photons and a conventional camera. The work is published in the 28 August issue of Nature1.

Zeilinger and his colleagues based the technique on an idea first outlined in 1991, in which there are two paths down which a photon can travel. Each contains a crystal that turns the particle into a pair of entangled photons2, 3. But only one path contains the object to be imaged.

According to the laws of quantum physics, if no one detects which path a photon took, the particle effectively has taken both routes, and a photon pair is created in each path at once, says Gabriela Barreto Lemos, a physicist at Austrian Academy of Sciences and a co-author on the latest paper.

The researchers imaged a cut-out of a cat, a few millimetres wide, as well as other shapes etched into silicon. The team probed the cat cut-out using a wavelength of light which they knew could not be detected by their camera. "That's important, it's the proof that it's working," says Zeilinger.

The cat was picked in honour of a thought experiment, proposed in 1935 by the Austrian physicist Erwin Schrödinger, in which a hypothetical cat in a box is both alive and dead, as long as no one knows whether or not a poison in the box has been released. In a similar way, Barreto Lemos says, in the latest experiment, as long as there is nothing to say which path the photon took, one of the photons in the pair that is subsequently created has both gone and not gone through the object.

Previous experiments have tried to do something similar in a process known as ghost imaging. But the latest method is simpler, says Mary Jacquiline Romero, a physicist at the University of Glasgow, UK. In ghost imaging, even though only one photon interacts with the object, both photons need to be collected to reconstruct the image, whereas in the Vienna team's work only one photon needs to be detected. As ghost imaging needs both photons to produce the image, some physicists have questioned whether the effect is truly quantum or could be explained by classical physics4 – an argument Zeilinger says would be difficult to make with this experiment.

Robert Boyd, a physicist at the University of Rochester in New York, says that the experiment is so intriguing he wishes he had thought of it first. "That's the greatest compliment that a scientist can give," he says.