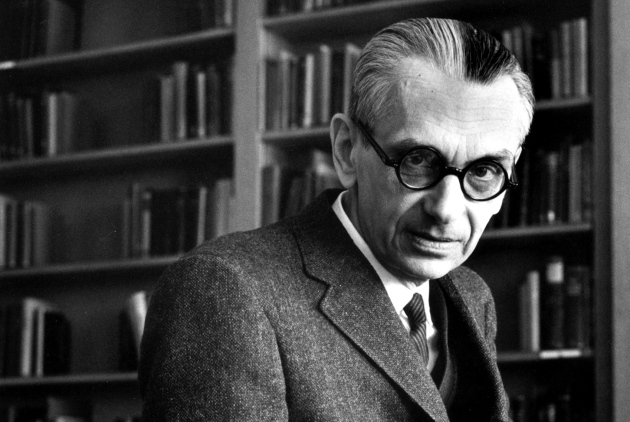 Austrian-born mathematician Kurt Godel shocked his colleagues in 1931 when he found that arithmetic cannot be proven to be self-consistent.

This year, the Gödel Prize — the most coveted recognition for computer scientists — will have a soundtrack worthy of its name. The award ceremony, on 9 July in Copenhagen, will include a commissioned music piece that encodes the logical axioms worked on by Kurt Gödel, the Austrian-born mathematician for whom the prize is named.

The piece, “The Hilbert Heartbreak Hotel” by Danish composer Niels Marthinsen, was the brainchild of computer scientist Thore Husfeldt of Lund University in Sweden and IT University of Copenhagen. “I probably have some latent frustration about the increasing fragmentation of the arts and sciences,” Husfeldt says, “so maybe it’s an attempt to bring together some strands of culture that I happen to enjoy very much.”

Husfeldt says that he became a computer scientist in part because he read Gödel, Escher, Bach as a teenager. The book, by cognitive scientist Douglas Hofstadter, draws parallels between the theories of Gödel, the musical structures of Johann Sebastian Bach and the intricate geometrical drawings of twentieth-century Dutch artist M.C. Escher.

Marthinsen was a student of the Danish composer Per Nørgård, who in the 1960s explored the use of mathematics in composition with, for example, series of notes with the fractal-like property of self-similarity.

So Marthinsen was a natural choice for commissioning the piece. “He said: ‘This is completely insane and I don’t have time at all, but of course we have to do it.’” Husfeldt recalls. “From there, the puzzle was to actually make it work.”

Thore Husfeldt and Niels Marthinsen discuss the outcome of the musical work (click on subtitles button to see English subtitles).

The basis for “The Hilbert Heartbreak Hotel” is a set of axioms about integers, or whole numbers, proposed by the Italian mathematician Giuseppe Peano in the late nineteenth century. The axioms are an attempt to put arithmetic and number theory on formal, logical foundations, starting from some obvious-seeming statements such as: “For every natural number x, x = x” and “If x = y, then y = x”.

Peano’s axioms can be expressed in the notation of symbolic logic, from which all basic arithmetical operations, such as multiplication, can be derived. In 1900 the German mathematician David Hilbert observed that proving the consistency of these axioms was one of the key unsolved problem in maths. If the axioms were mutually incompatible, it would seem that the entire edifice of maths — which encompasses a broad range of subfields such as infinitesimal calculus or probability theory — was on shaky foundations.

But in 1931, Gödel showed that no such proof can be found within Peano arithmetic itself. In one of his famous ‘incompleteness’ theorems, Gödel showed that only adding extra, ‘meta-mathematical’ axioms can make arithmetic consistent. In showing that maths apparently cannot achieve logical closure, Gödel’s work shocked mathematicians and philosophers.

To turn Peano’s axioms into music, Marthinsen assigned each logical symbol to a musical note to create short musical phrases, which he calls gödelings. He used several different ‘encodings’ of this sort to create what he calls “musically satisfactory language” — a set of options that does not sound too sterile. Similar encodings of alphabetic or symbol strings into musical notes have been explored by many others, from Bach to the Russian composer Dmitri Shostakovich.

Marthinsen layered these gödelings to produce musical parts that are “complicated but understandable” — reminiscent of the interweaving voices of Bach’s counterpoint. He says that he wanted to ensure that the result worked as music and did not get lost in “numerology”.

On top of this, Marthinsen placed a freely composed soprano vocal. “The soprano sings about Hilbert’s Heartbreak Hotel,” he explains: “how a heartless person entering the hotel is given a human heart from one of the guests on a winter’s night, and how all the guests pass on their hearts to each other until everybody has one.” The scenario alludes to a paradox about infinite sets — conceptualized by Hilbert as a hotel with an infinite number of rooms1 — as well as to Elvis Presley's song Heartbreak Hotel.

No recording exists yet of “The Hilbert Heartbreak Hotel”, and the piece's performance at the award ceremony will be its world première. [Update 14 July: a recording is now available online.]

The Gödel Prize, worth US$5,000, will be shared by Ronald Fagin, a computer scientist at IBM’s Almaden Research Center in San Jose, California; Amnon Lotem, an algorithm specialist in Israel; and Moni Naor, a computer scientist at the Weizmann Institute of Science in Rehovot, Israel. Together the three devised an algorithm that optimizes and ranks data gathered from diverse sources, such as audio, video and images2. Such algorithms are needed for ‘middleware’ — software that assists a computer’s operating system to interact with a network of other devices. The award is presented at the International Colloquium on Automata, Languages and Programming.

This story has been updated to include the link to a recording of ”The Hilbert Heartbreak Hotel”.