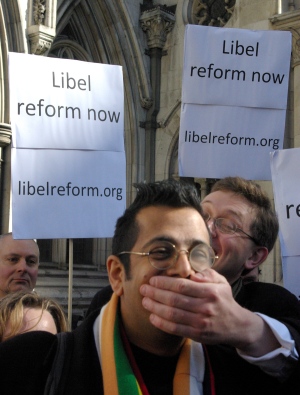 Science writer Simon Singh (with lawyer Robert Dougans covering his mouth) celebrating at the end of a legal case in April 2010.

Scientist-driven attempts to reform libel laws in England and Wales finally came to fruition on Wednesday as the House of Commons gave its stamp to a law designed to make it harder to use the courts to suppress debate.

Critics have argued that English laws are skewed in favour of those claiming they have been defamed, and that the costs of such cases can force people to keep quiet in the face of legal threats.

After high-profile cases that saw science writer Simon Singh and medical researcher Peter Wilmshurst dragged into defending potentially ruinous libel claims about scientific subjects, a campaign to reform the laws gathered momentum. Nature — which has also been taken to court under English libel law — has supported the campaign.

The new Defamation Bill has been bouncing between the House of Commons and the House of Lords since last year, and finally reached the finish line with Wednesday’s positive vote in the Commons. To become law, it now has to be given formal assent by the Queen, which could happen as early as Thursday. (Update: the Queen granted assent on 25 April.)

“The science community has played a major role giving the Defamation Bill the momentum required to get it through the Parliamentary process. It is undoubtedly a bill to be welcomed, because it achieves a fairer balance between free speech and the right to reputation,” says Singh, who was sued by the British Chiropractic Association over an article he wrote in the Guardian newspaper in 2008 about chiropractic treatments.

Singh says that the bill includes improvements such as more protection for academic journals and restrictions on the ability of companies to “misuse and abuse libel to bully critics into silence”.

The new law will require companies to show serious financial harm when they sue. Proponents hope that this will raise the bar from the present law, which has no such requirement. The new law also introduces a defence of "responsible publication on matters of public interest", which should offer increased protection for newspapers publishing controversial articles, including those regarding scientific matters.

Advocates of libel reform have been celebrating on social media, but the bill does not meet all their hopes.

Singh says, “The government has not yet made it clear how court procedures will change in order to speed up cases and reduce costs. Also, we are waiting for more information about how the Defamation Bill will apply to the online community.”

Speaking in the Commons on Wednesday, Robert Flello, Labour Member of Parliament for Stoke-on-Trent, also voiced concern over costs. The threat of having to pay the enormous cost of libel trials leads many of those sued or threatened to capitulate rather than mount a defence, say those pushing reform.

Robert Dougans, solicitor-advocate at the litigation firm Bryan Cave in London, who represented Simon Singh in the British Chiropractic Association case, also sees the cost of litigation as a real problem. He says that although courts are trying to keep costs under control, the matter should be considered urgently by the government.

Dougans is also concerned about the bill’s “effective abolition of jury trials” for libel cases, contained in a provision that removes a current presumption in favour of them.

His verdict: “Frankly, I cannot see this having made any difference in any case I have been involved in, and I wish an opportunity had been taken to re-think defamation law ab initio.”

The text was updated to reflect the fact that the Queen granted assent on 25 April.