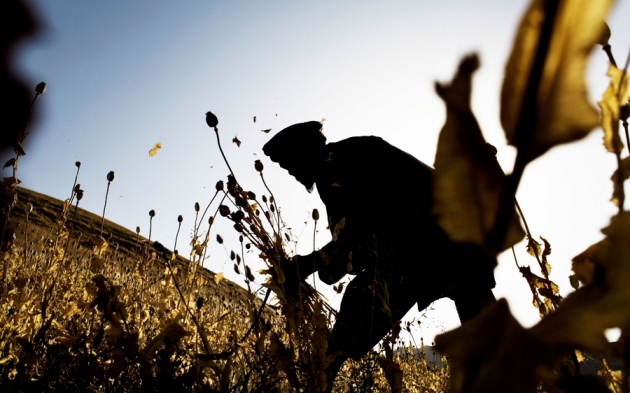 Poppies may soon be joined by bioengineered yeast as a source of opiates.

Biotechnology is about to make morphine production as simple as brewing beer. A paper published on 18 May in Nature Chemical Biology1 reports the creation of a yeast strain containing the first half of a biochemical pathway that turns simple sugars into morphine — mimicking the process by which poppies make opiates. Combined with other advances, researchers predict that it will be only a few years — or even months — before a single engineered yeast strain can complete the entire process.

Besides giving biologists the power to tinker with the morphine-production process, the advance could lead to more-effective, less addictive and cheaper painkillers that could be brewed under tight controls in fermentation vats. At the same time, it could enable widespread, localized production of illegal opiates such as heroin, increasing people’s access to such drugs. Recognizing that danger, the synthetic biologists behind the work have already opened a discussion of how to prevent the technology’s misuse without hampering further research.

“It’s easy to point to heroin; that’s a concrete problem,” says bioengineer John Dueber of the University of California, Berkeley, who led the latest research. “The benefits are less visible. They are going to greatly outweigh the negative, but it’s hard to describe them.”

Over the past decade, several research teams have tried to coax microbes, including the baker’s yeast Saccharomyces cerevisiae and the lab-workhorse bacterium Escherichia coli, into making plant-derived drugs. The anti­malarial drug artemisinin, originally derived from sweet wormwood (Artemisia annua), is now produced commercially in yeast.

The opium poppy (Papaver somniferum), as the only commercial source of morphine and opioid painkillers such as oxycodone and hydrocodone, is an obvious target for bioengineering. The crop must be grown in highly regulated conditions, in only a few countries. Outside those boundaries, in places such as Afghanistan, it is grown to supply the illegal heroin trade. Producing opiates in industrial facilities from yeast could eliminate the need for the tightly controlled legal plant-production chain.

But the opiate-synthesis pathway is long — roughly 18 steps — and biochemically complex. Because there is no whole sequencedgenome for the opium poppy, identifying the enzymes that catalyse the synthesis reactions has been difficult. So bioengineers have looked for enzymes in other plants, and even in humans and insects, that could carry out the desired reactions when inserted into a microbe’s genome. They have also developed techniques to make those enzymes more efficient by mutating the genes that encode them and selecting for mutations that increase the output of desired products. But so far, no one has been able to engineer the whole process into a single organism.

Dueber and colleagues’ work does not reach that goal. But it demonstrates that, given the right genes and biochemical machinery, yeast can convert glucose into the intermediate compound (S)-reticuline — the first half of the poppy’s morphine-production pathway.

Together with a similar paper2 published in PLoS ONE on 23 April that covers the second half of the pathway, and a PhD thesis (see go.nature.com/kwgc8n) that identifies the cellular machinery to join the two halves, all of the pieces are now in place to make opiates in yeast.

“I don’t want to undersell how much work there still is to do, but I don’t want to undersell how short that work is,” Dueber says. Even when the entire apparatus has been incorporated into a single strain of yeast, efforts will still be needed to make the fermentation processes efficient. In theory, once that work is done, anyone who could obtain the engineered yeast strain would be able to make morphine in a process that is no more complicated than home-brewing beer.

For that reason, Dueber and his colleagues shared their research before publication with biotechnology-policy specialists Kenneth Oye, of the Massachusetts Institute of Technology (MIT) in Cambridge, and Tania Bubela, of the University of Alberta in Edmonton, Canada. With MIT political scientist Chappell Lawson, Oye and Bubela have written a Comment article3 in Nature (see page 281) that calls for proactive examination of the risks and benefits of engineering organisms to make compounds that are both useful and dangerous. They urge drug and bio­security regulators, law-enforcement agencies, scientists and public-health officials to come together to develop safeguards that minimize risk without quashing research.

“From the perspective of law enforcement, this is a new technology that could be abused with negative consequences,” says Lawson, who spent 18 months as an adviser to the commissioner of US Customs and Border Protection. “I don’t think anyone wants millions more opiate addicts.”

Clever biochemical prospecting helped Dueber and his colleagues to advance their research faster than expected. The scientists needed an enzyme that would catalyse the initial reaction in the morphine assembly line, a step that has been a stumbling block in making the process work in yeast. That stage turns tyrosine, an amino acid that yeast naturally produces in abundance, into the molecule l-DOPA. But most enzymes that catalyse that reaction go on to turn l-DOPA into an unwanted by-product. So William DeLoache, a bioengineer in Dueber’s lab, took such an enzyme from sugar beet (Beta vulgaris) and systematically mutated it until it would carry out only the reaction from tyrosine to l-DOPA (see ‘Pathway potholes’). Adding more enzymes, including one from a soil bacterium and one that the team discovered in the opium poppy, completed the first half of the opiate assembly line.

The effort to manufacture opiates in yeast has long been stymied by one step early in the process by which poppies make such drugs. This reaction converts the amino acid tyrosine into l-DOPA, which can then be converted into dopamine, a compound needed in large quantities for opiate production. The enzyme that opium poppies use for this step has not yet been identified. Although enzymes from other plants carry out the reaction, they also immediately convert l-DOPA into dopaquinone, an unwanted by-product that many organisms use to make the pigment melanin.

To solve this problem in the yeast pathway, bioengineer William DeLoache and colleagues at the University of California, Berkeley, inserted1 a sugar-beet enzyme into yeast that converts tyrosine into l-DOPA. Then they induced mutations in the yeast cells to produce multiple variants of the enzyme, hoping that one would churn out l-DOPA without also catalysing the reaction that makes dopaquinone. To spot the hoped-for enzyme, they inserted into the mutated yeast another plant enzyme, from the four o’clock flower (Mirabilis jalapa). That enzyme produces the bright-orange pigment betaxanthin when l-DOPA is present, and a purple one in response to the unwanted dopaquinone. This revealed, simply by colour, which mutants most efficiently made l-DOPA from tyrosine but did not make dopaquinone.

After screening nearly half a million mutants, the team hit on an enzyme that produced one-fifth the amount of violet pigment compared to the yeast containing the original beet enzyme. This variant also made 3.7 times more orange betaxanthin. The researchers then removed the pigment-making enzymes from the mutant, replacing them with an enzyme from the soil microbe Pseudomonas putida, which efficiently converts l-DOPA into dopamine. They also found a previously unknown enzyme from opium poppies that converts dopamine into the next morphine precursor, norcoclaurine. By adding four more known enzymes to catalyse subsequent reactions, the team assembled the entire first half of the opiate-production pathway in yeast.

The implications for opiate production are one thing, but researchers say that they are most excited by the prospect of taking bits and pieces of plant pathways to create entirely new molecules. “A plant goes from A to Z without stopping at something valuable in between,” says biologist Vincent Martin of Concordia University in Montreal, Canada, who contributed to the development of both the first and second halves of the yeast production pathway. “We’re not restricted to what evolution has restricted to a single plant — we can mix and match.”

That is the real promise of synthetic biology, says Dueber: not just cutting the cost and time it takes to make known plant compounds, but tinkering with the processes that a plant uses to make what he calls “unnatural natural products”. These have the potential to be extremely beneficial, but that value risks being overshadowed by the spectre of illicit yeast-based heroin production.

“This work has very interesting and important implications, but there are regulatory gaps,” says Oye. “The question is, can regulators be nimble and figure this out before people finish the work?”