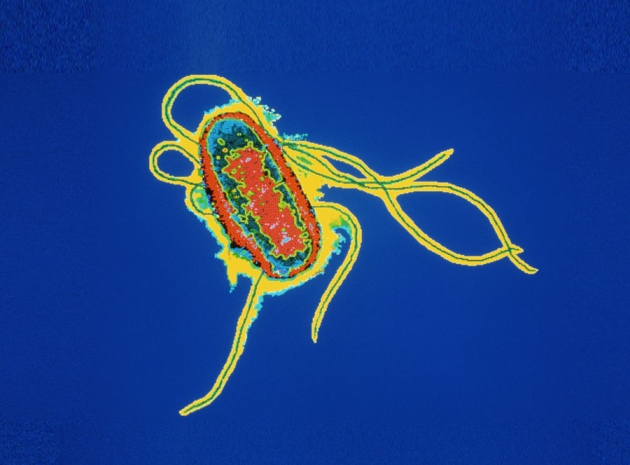 In the war against infection, medicine needs a hero. Meet the bioengineered bacterium that can hunt down pathogens and destroy them with a powerful one–two punch.

Synthetic biologist Matthew Chang at Nanyang Technological University in Singapore has armed Escherichia coli bacteria with a ‘seek and kill’ system that targets cells of Pseudomonas aeruginosa, an invasive bacterium that causes pneumonia and other illnesses1. In preliminary tests with infected mice, the modified bacterium left a trail of dead P. aeruginosa in its wake.

Chang and his team had previously developed an E. coli that could brew up an antibacterial peptide called pyocin, and then explode to release its deadly cargo whenever it detected a chemical signal emitted by its prey2. Now the bioengineered vigilante is back — and it is tougher than ever.

The researchers inserted genes into E. coli to make a killing peptide called microcin S (MccS). This is smaller than pyocin, so the E. coli can secrete it, rather than delivering the payload in a single suicidal burst. That means that fewer of the modified bacteria are required to treat an infection.

The team then loaded the engineered bacterium with genes to make a nuclease called DNase I. This efficiently slices through the protective biofilm that envelops P. aeruginosa colonies by breaking down the nucleic acids that help to hold the biofilm together.

The researchers programmed their E. coli so that it cunningly keeps its powder dry until it is close to its mark. It can detect a P. aeruginosa messenger molecule used for a process called quorum sensing, by which the invader assesses its own population density. Each E. coli generates a protein that latches on to a quorum-sensing molecule, forming a complex that activates its weapons systems.

That complex also controls E. coli’s movement, so that the bacterium swims towards higher concentrations of a quorum-sensing molecule — a process called chemotaxis. As it homes in on its quarry, the E. coli ramps up its ammunition production.

“That’s the real gem of this work,” says William Bentley, a synthetic biologist at the University of Maryland in College Park. “I think it’s really innovative.” Some of these tactics have been used individually in other bioengineered bacteria, but “putting it all together is totally new”, says Bentley. The assassin is unveiled this week in ACS Synthetic Biology1.

Chang fed his microscopic mercenaries to mice infected with P. aeruginosa, then collected faecal samples a few hours later. He found that the animals had fewer pathogens than those given ordinary E. coli. and appeared to suffer no ill effects from the treatment. “It’s quite promising,” says Chang.

But can such engineered bacteria ever be used in humans? “I believe so,” says Chang. Most conventional antibiotic treatments kill bacteria indiscriminately, taking out both pathogenic microbes and beneficial bacteria in the gut, for example. By contrast, Chang’s E. coli offers the possibility of a surgical strike.

Chang also suggests that the bacterium could be given to people at high risk of pathogenic infection. The E. coli would lie dormant in the gut, and activate only once its enemy makes an appearance. “Of course there are regulatory hurdles: these are genetically modified organisms,” says Chang. “But eventually, if we can demonstrate that it is safe and effective, I really envision that this could be used in humans.”

Bentley and his collaborators have used a similar approach to make bacteria that seek out cancer cells, and deliver a burst of chemicals when they arrive3. He is now working with Chang on a project funded by the US Defense Threat Reduction Agency to produce a version of E. coli that can neutralize pathogens other than P. aeruginosa. “We wanted to get his ability to target bacteria,” says Bentley.

Other researchers have been working on similar systems. For example, Ron Weiss and colleagues at the Massachusetts Institute of Technology in Cambridge, recently made an E. coli that could detect the same messenger molecule from P. aeruginosa, and deliver an antimicrobial compound in response4.

Chang is also trying to improve his bacterium’s targeting system and boost its ability to cut through mature biofilms. He is giving his E. coli the ability to grab onto enemy microbes so that they cannot escape. From now on, pathogens may have to ask themselves one question: Do I feel lucky? Well, do you, P. aeruginosa?