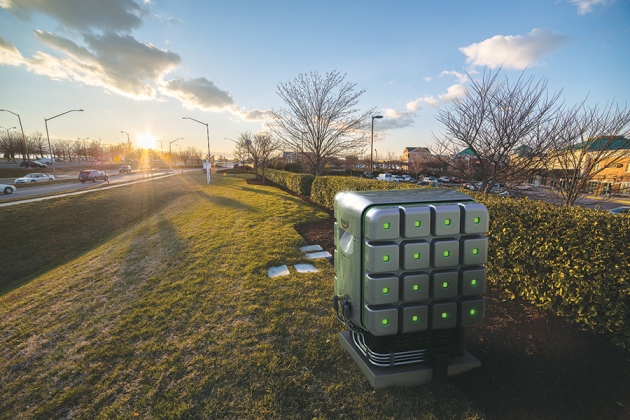 The Redox Cube is a planned 25-kilowatt fuel cell to be run on natural gas.

Investments in solar photovoltaics and wind turbines are soaring as costs fall and governments and companies seek to reduce greenhouse-gas emissions. But fluctuating power from the wind and sun threatens to destabilize electricity grids. As more intermittent sources are connected, the power surges and crashes. This increases variability in voltage, in power and in the frequency of alternating current.

Already, Germany, which produces more than 25% of its energy from renewables, is experiencing problems. Voltage glitches, by tripping crucial components and destroying equipment in factories and plants, have caused hundreds of thousands of euros of damage1. Using coal plants to maintain stability adds greenhouse-gas emissions.

Generation and load must be balanced. Three approaches are in operation: using real-time demand and pricing incentives to control load; ramping natural-gas plants up or down to compensate for fluctuating power; and storing energy. Each has downsides. Repeated requests to reduce demand agitate users and may be manipulated by third parties who stand to profit. Gas turbines and batteries cannot provide rapid (less than a second) high-power responses and supply energy for long periods. Batteries degrade and are expensive to replace. Combinations of batteries require multiple sets of electronics and control systems.

New types of fuel cell on the horizon could eliminate the need for such trade-offs and ease the integration of renewables into the grid. Currently, fuel cells are used to generate only electricity and heat. They can be modified to store energy and produce liquid fuels such as methanol, thanks to breakthroughs in materials and designs. Developing fuel cells with a battery mode is one focus of the programme I direct at the US Advanced Research Projects Agency–Energy (ARPA-E). I lead 13 projects across academia, industry and national laboratories.

Power generation from distributed sources is expanding rapidly. Up to three times the current capacity of solar photovoltaics is projected2 to come online in the United States by 2040 (an extra 15–75 gigawatts; GW). But conventional power grids are not designed to handle hundreds of thousands of small variable sources.

Renewables have two types of intermittency. First, output may fluctuate randomly moment-to-moment — for example, because of clouds casting shadows on solar panels. Second, output varies predictably through the day and night. According to one projection by the California Independent System Operator, the power needs for a late California afternoon in March 2020, when the sun is setting and people are returning home, will require a 13 GW ramp up over 3 hours — that is equivalent to switching on more than 20 power plants of 600-megawatt capacity (see 'Daily load'). 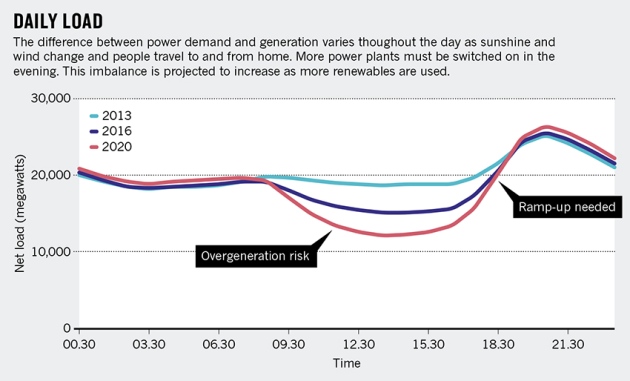 Actions to decrease demand — such as changing thermostat settings by a few degrees — are often the first deployed when the grid is pushed to its limit on, say, a sweltering summer day in a large city. Such 'demand response' can potentially shed up to 9% of the peak load in the United States3. But policy uncertainties make demand response fraught for grid system operators.

In May 2014, the US Court of Appeals struck down a 2011 order by the Federal Energy Regulatory Commission (FERC) that required grid operators to pay demand-response resources the full market price for energy, just as they would for conventional power generators. The court ruled that because demand response constitutes a retail market, it should be subjected to state (rather than FERC) jurisdiction. President Barack Obama appealed the ruling and the US Supreme Court will hear the case later this year. Either way, demand-side measures alone cannot accommodate the amount of renewables projected to be installed in the United States in the coming decades.

The latest natural-gas turbines are designed with a buffering capacity, to help to smooth out the power output from renewables. They get up to speed quickly, with ramping rates of tens of megawatts per minute. Still, it takes minutes — not seconds — to produce power from a standing start. Turbines that are already spinning can be brought into operation within seconds but with lower efficiency, higher emissions and, in the United States, 13–24% higher operating costs4.

The use of batteries for grid energy storage is receiving more attention. Energy companies are becoming increasingly confident that such devices are reliable in the field. Regulations are becoming more favourable. California has mandated 1.32 GW of storage capacity by 2020 and its utility companies have begun to buy storage devices.

One milestone was an announcement in May from the electric-car maker Tesla Motors, of Palo Alto, California. It has developed 7- and 10-kilowatt-hour (kWh) residential battery systems costing up to US$3,500. The company hopes that homeowners will want to avoid power cuts and paying peak electricity rates by charging the battery with solar panels or when grid prices are off-peak. But a battery's storage capacity is limited by its size. Tesla's 10 kWh, 1-metre-square, lithium-ion battery panel powers a home for one day, not enough for power cuts such as those following hurricanes and storms. Further improvements to cost and performance will come from higher-volume manufacturing of lithium-ion batteries and competing technologies such as redox (reduction–oxidation) flow batteries. No single technology provides the optimal balance.

Existing technologies such as improved wind-forecasting models, expansion of transmission infrastructure and other measures may help grids to remain stable as renewables penetration increases5. But larger grids (tens of megawatts or more) operating with more than 50% distributed generation are unprecedented. The adequacy of current technologies to support such a grid is unknown.

I back a different approach: fuel cells with built-in charge storage. Fuel cells have been touted for energy production for decades owing to their high electrical efficiencies. They have not been widely adopted because they are more expensive than combustion generators ($3,000 per kilowatt, compared with $1,000 per kilowatt). Over the past 15 years, US government-funded research programmes have aimed to lower those costs. Enhancing fuel-cell functionality would make them even more valuable.

“Fuel cells have been touted for energy production for decades.”

Fuel cells are electrochemical devices similar to batteries that rely on a substance such as hydrogen or methane to produce power and heat. Two main types are in use: polymer fuel cells that operate at around 80 °C for vehicles; and solid-oxide fuel cells that operate above 650 °C for stationary power. Polymer fuel cells require expensive platinum catalysts; solid-oxide fuel cells need expensive seals and connectors and have a limited lifetime. Adding functionality is difficult at either extreme of temperature.

Existing fuel cells are slow to respond to changes in current and voltage, taking more than a second. Hot fuel cells (operating above 650 °C) must avoid stressing their constituent materials, and their fuel processors take up to a minute to alter the rate at which methane is converted to hydrogen, carbon monoxide and carbon dioxide. Cells degrade if they are 'starved' of fuel.

Storing charge in or near a fuel cell's electrode would speed up the device's responsiveness, allow it to be 'recharged' without stopping and to live longer than conventional fuel cells. The battery-mode concept has been demonstrated in the lab in (cold) alkaline fuel cells with metal hydride anodes6, 7 and a (hot) solid-oxide fuel cell with vanadium oxide electrodes8. Although the power densities reported were low, the cells stored voltage for minutes or hours. More materials research is required to increase the power output and reduce energy losses at the anode, which reacts with the fuel and stores charge.

Another function that could be integrated into fuel cells is the electrochemical conversion of natural gas (methane) into liquid fuels such as methanol. Current gas-to-liquid (GTL) technologies are economical only at large scales; Shell's Pearl GTL plant in Qatar processes up to 45 million cubic metres of gas a day.

Rather than switching off solar panels or wind turbines when they are not needed, the spare electrons generated when supply exceeds demand could be directed towards making liquids for transportation fuels or chemicals. At natural-gas wells, such fuel cells could convert gas that would otherwise be flared or vented. Such devices have been demonstrated in the lab in the past five years but are not yet commercially viable9. Researchers need to overcome the inherent stability of the methane molecule and convert it such that it is neither oxidized fully to CO2 nor converted back to methane from an intermediate state.

I believe that both charge storage and fuel production can be incorporated cheaply into fuel cells that operate at intermediate temperatures. In the 200–500 °C range, many compounds capture and release hydrogen (magnesium hydride is one). These conditions are also more suitable for GTL conversion: hot enough for reasonable reaction kinetics, yet not so hot that methane oxidizes completely to CO2. Materials research on proton and oxygen ion conductors in the past decade shows that such fuel cells are possible.

For intermediate-temperature hybrid fuel cells to become a reality, researchers need to create solid electrolytes with high conductivity, and find electrode materials that have high activity and stability and that react with methane without forming coke (solid carbon). These devices must use less platinum catalyst and more impure fuel than low-temperature polymer cells; make do with cheaper seals and connectors; and last longer than higher-temperature solid-oxide fuel cells.

US researchers have made a start. I launched the Reliable Electricity Based on Electrochemical Systems (REBELS) programme at ARPA-E with $33 million in funding in June 2014. It is starting to bear fruit10. Efforts elsewhere, particularly in Europe and Japan, are addressing hydrogen generation and GTL separately but could also benefit from hybrid fuel cells.

Researchers should prove the viability of intermediate-temperature fuel cells with these extra functions by demonstrating high power density and a lifetime of ten years, compared with current cell lifetimes of less than five. Cost savings must be validated through rigorous techno-economic modelling. Advances will then need to be scaled up from individual cells to kilowatt-scale systems, which will take 5–10 years.

Regulators, utility companies, technologists and users must define an appropriate mix of technologies and incentives to maintain the stability of the electricity grid in the coming decades. Hybrid fuel cells must be part of that conversation.