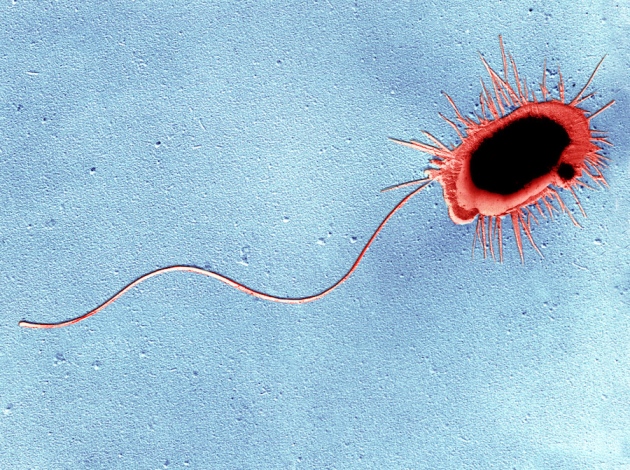 Swimming bacteria can thin out an ordinary liquid and, in some cases, turn it into a zero-viscosity superfluid, researchers report.

The work agrees with theoretical models1 that suggest a solution of microbes might be able to flow without friction. The research captures the details of the transition from a regular fluid to an exotic superfluid, says Karsten Kruse, a physicist at Saarland University in Saarbrücken, Germany.

A team led by physicist Harold Auradou at the University of Paris-Sud in Orsay had sought to test whether adding swimming bacteria to a fluid would change its properties. In the study, published on 7 July in Physical Review Letters2, the researchers propose that such a fluid could be used as a small motor under the right conditions.

The researchers immersed Escherichia coli cells in a small amount of water and nutrients — enough to keep the bacteria alive and moving, but not enough to allow them to reproduce. The scientists spun the solution slowly in a rheometer, a device that measures viscosity, and recorded how the sample flowed at different spin rates and bacterial concentrations. This allowed the team to calculate the viscosity of the bacterial cocktail.

As the number of bacteria was increased, the viscosity dropped, confirming predictions3 about the effects of microscopic active swimmers on a normal fluid. Adding roughly 6 billion cells of a particularly active E. coli strain dropped the solution's viscosity all the way to zero; it remained at that level when the team tested solutions with even higher concentrations.

Auradou is confident that this reduction is caused by the activity of the bacteria, and not other factors, for a simple reason. “If you use dead bacteria, nothing changes,” he says.

Researchers do not yet know how bacteria transform normal fluids into superfluids. “We believe that there is a kind of collective motion of the bacteria that we don't understand yet,” says Auradou.

Models suggest that the flagella — or spinning hairs — that bacteria use to propel themselves could have an important role in the phenomenon. As the bacteria swim, they fight against the current, decreasing the local forces between molecules that ultimately determine the fluid’s viscosity.

Auradou says that his team's decades-old rheometer was the key to their discovery — mainly because the instrument was able to measure flow at the slow rotation rates required to observe the effect. “You cannot do that with present rheometers because they are too sophisticated and they are made to measure higher viscosity and higher shear rate,” he says.

The researchers enhanced their vintage device by connecting it to a computer-controlled motor and an electronic readout of the fluid’s response. “The most interesting thing about this paper is the design of the instrument,” says Igor Aronson, a physicist at Argonne National Laboratory in Illinois. “It's a unique instrument, in fact, designed exactly for this experiment.”