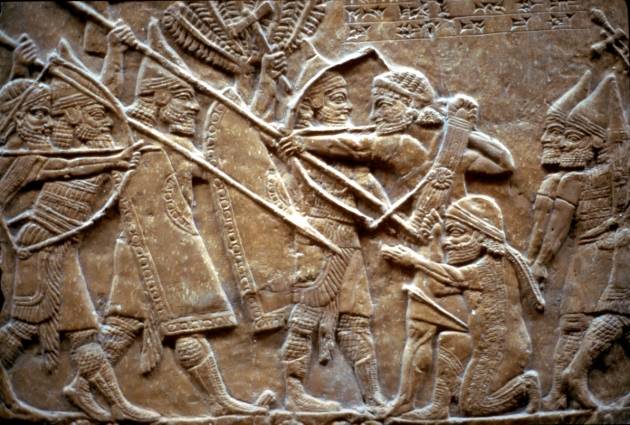 Empires such as that of the Assyrians — portrayed here in the Battle of Til-Tuba of the seventh century bc — may have emerged in response to the pressure of conflict among smaller states.

War drove the formation of complex social institutions such as religions and bureaucracies, a study suggests. The institutions would have helped to maintain stability in large and ethnically diverse early societies. The study authors, who tested their theories in simulations and compared the results with historical data, found that empires arise in response to the pressure of warfare between small states.

Peter Turchin, a population dynamicist at the University of Connecticut in Storrs, and his colleagues set out to understand why social institutions came about when they were costly for individuals to build and maintain. “Our model says they spread because they helped societies compete against each other,” says Turchin. The results are published in the Proceedings of the National Academy of Sciences1.

The team looked at a part of world history in which competition was fierce: Africa and Eurasia between 1500 bc and ad 1500. In the first millennium bc, nomads on the Eurasian steppe invented mounted archery, the most effective projectile weaponry technique until gunpowder. As that technology spread, evolving into chariot and cavalry warfare, conflict intensified.

The researchers developed a model in which Africa and Eurasia were divided into a grid of cells 100 kilometres on a side. Each cell was characterized according to the kind of landscape, its elevation about sea level and whether or not it had agriculture — because the first nations were agricultural societies. At the start of the simulation, each agricultural cell was inhabited by an independent state, and states on the border between agrarian societies and the steppe were seeded with military technology. The team simulated the diffusion of that technology and looked for effects on the intensity of warfare and the development of social institutions.

Turchin recognizes that states compete in more ways than just warfare, but says that although his model was simple, it predicted the historical rise of empires in the region with 65% accuracy. That figure dropped to 16% if the diffusion of military technology was omitted from the model. Moreover, the disintegration of empires led to the dismantling of institutions. “When the Roman Empire broke up, literacy effectively went extinct, because the smaller fragment states did not need a literate bureaucracy,” says Turchin.

Turchin is championing a systematic approach to history that tests hypotheses against big data; he calls it cliodynamics, after Clio, the ancient Greek muse of history. He has been criticized for searching for patterns in too few data. But Kenneth Pomeranz, a historian of modern China at the University of Chicago in Illinois and president of the American Historical Association, says that Turchin’s claims are reasonable given their “very rough granularity”. Turchin, says Pomeranz, wants “to explain why big states form in some places more often than others, not why the Greeks defeat the Persians at Salamis or why Qin rather than Chu becomes the core state of the early Chinese empire”. Pomeranz adds that Turchin's model of early empire building is a “real contribution”.

Joe Manning, an ancient historian at Yale University in New Haven, Connecticut, is a fan of cliodynamics because “at a minimum, it forces specialists to think holistically about societies”. It could also be useful for making predictions, says Harvey Whitehouse, an anthropologist at the University of Oxford, UK, with whom Turchin is collaborating to build a global database of historical information. “Being able to predict extreme behaviour in much the same way as epidemiologists predict disease outbreaks would enable governments to establish early-warning systems and deploy damage-limitation measures," says Whitehouse.