Timothy Gowers is surprised and delighted that thousands of mathematics and other researchers have joined him in a public pledge not to have anything to do with Elsevier, the Amsterdam-based academic publishing giant. He is leading a boycott because of company practices that he says hinder the dissemination of research.

But he is not expecting a big response from Elsevier. “The goal of the boycott is not to get Elsevier to change how it does things, but rather to change how we in the mathematics community behave, and in that way to rid ourselves of major commercial publishers,” he says. 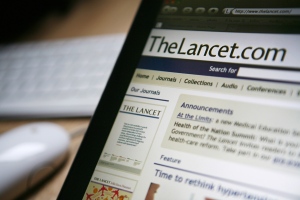 A boycott of Elsevier's high-impact journals, which include The Lancet, could have severe consequences for the company and researchers alike.

This won’t happen suddenly. “It may be necessary for things to go a bit quiet while we lay the ground work and put in some hard graft.”

There is a precedent: the most lasting legacy of previous such boycotts and protests has been the creation of new places and ways to publish, rather than the mass desertion of existing publishers.

Gowers, a mathematician at the University of Cambridge, UK, and a winner of the Fields medal, mathematics’ highest honour, declared his boycott in a blog post on 21 January. He cited Elsevier’s high prices; the practice of bundling journals, which some see as forcing libraries to subscribe to journals they don’t want to get those that they do; and the company's support for US legislation such as the Research Works Act (RWA), which would forbid government agencies from requiring that the results of research they fund be placed in public repositories. Elsevier is not the only publisher guilty of such practices, says Gowers, but it is the worst offender.

Since the protest began, more than 4,800 researchers from all fields have joined in; about 20% are mathematicians. After an initial burst of activity, the petition is now attracting around 200 new signatories each day. On 8 February, Gowers and 33 other mathematicians, including Ingrid Daubechies, president of the International Mathematical Union, released a follow-up statement detailing their objections to Elsevier’s practices.

Avoiding the company is unlikely to be problematic for mathematicians. "Elsevier doesn't have any really strong journals in mathematics," says Rob Kirby, a topologist at the University of California, Berkeley. But its biology and medicine journals include big-hitters such as Cell and The Lancet, so a boycott in those fields would be both a bigger blow to the company and a bigger sacrifice for the signatories. So far, around 900 people declaring themselves to be in biology or medicine have signed the pledge.

Gowers' complaints are “not factually correct”, says Alicia Wise, Elsevier’s head of universal access, who is based in Oxford, UK. The cost-per-download of Elsevier articles is one-fifth of what it was ten years ago, she says. And bundling is never compulsory, and widens access — “when a large bundle is taken, approximately 40% of use happens on titles that weren’t previously subscribed to”, says Wise.

“Our support for the RWA was informed by concern about unwanted and potentially harmful government laws that can undermine the stability of the peer-reviewed publishing system,” she adds. “That said, it’s our sincere wish to de-escalate the constant cycle of legislation and lobbying around this issue.”

In 2000–01, a similar petition forswearing contact with publishers who refused to place papers in open repositories attracted 30,000 signatories. There are no exact figures for how many signatories kept that pledge, but most did not, says Michael Eisen, a geneticist at the University of California, Berkeley, and one of the leaders of the campaign.

It was disappointing but understandable, says Eisen. “Basically no publishers responded, so authors were left with a limited palette of options to choose from,” he says. “A few of us stuck to our guns, but most were left in a position where they felt it wasn’t possible to really follow through.”

The campaign did prompt Eisen and others to set up the Public Library of Science publishing venture based in San Francisco, California, to provide an open-access alternative to subscription journals.

There is a similar precedent in mathematics. In 1997, Kirby wrote an open letter to Elsevier protesting the company’s high prices. The support he received inspired him and some colleagues to start their own journal, Geometry and Topology. “It’s become one of the top ten journals in the field, because of a lot of support from the community,” he says.

Gowers is entertaining more radical ideas, such as creating journals that consist solely of links to papers posted on the arXiv preprint server. Publishers are no longer needed to typeset or distribute papers, he says; the main outstanding question is how to replicate or replace the role that journals play in reviewing work and conferring prestige.

He does say that “there are probably quite a lot of mathematicians for whom that idea would be going too far”. At this stage, Gowers believes, maintaining the boycott’s unity and inclusiveness is more important than fixing future policy.