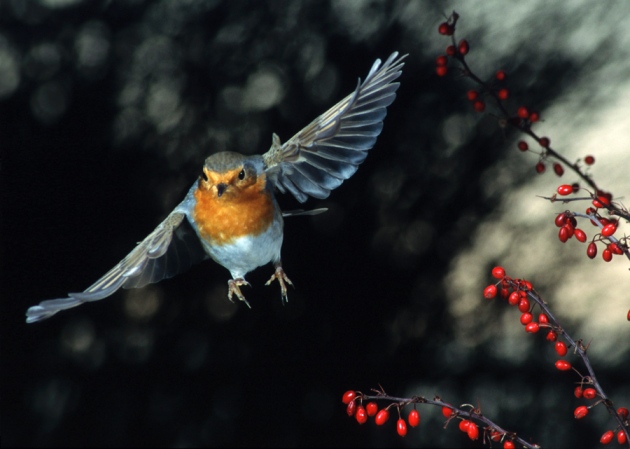 European robins are among the bird species that orient by detecting magnetic fields.

Interference from electronics and AM radio signals can disrupt the internal magnetic compasses of migratory birds, researchers report today in Nature1. The work raises the possibility that cities have significant effects on bird migration patterns.

Decades of experiments have shown that migratory birds can orient themselves on migration paths using internal compasses guided by Earth's magnetic field. But until now, there has been little evidence that electromagnetic radiation created by humans affects the process.

Like most biologists studying magnetoreception, report co-author Henrik Mouritsen used to work at rural field sites far from cities teeming with electromagnetic noise. But in 2002, he moved to the University of Oldenburg, in a German city of around 160,000 people. As part of work to identify the part of the brain in which compass information is processed, he kept migratory European robins (Erithacus rubecula) inside wooden huts — a standard procedure that allows researchers to investigate magnetic navigation while being sure that the birds are not getting cues from the Sun or stars. But he found that on the city campus, the birds could not orient themselves in their proper migratory direction.

“I tried all kinds of stuff to make it work, and I couldn’t make it work,” Mouritsen says, “until one day we screened the wooden hut with aluminium.”

Mouritsen and his colleagues covered the huts with aluminium plates and electrically grounded them to cut out electromagnetic noise in frequencies ranging from 50 kilohertz to 5 megahertz — which includes the range used for AM radio transmissions. The shielding reduced the intensity of the noise by about two orders of magnitude. Under those conditions, the birds were able to orient themselves.

When the team disconnected the grounding, the aluminium plates failed to keep the artificial noise out, and the robins could not find their way. To further test whether electromagnetic noise was responsible, the researchers simulated it using a commercially available signal generator. The birds again became disoriented.

Before sharing the results, the team spent seven years conducting double-blind tests, independently replicated by different generations of students. “We wanted to make sure that we could really document that what we were seeing was real,” says Mouritsen.

The findings imply that the birds' navigation is controlled by a biological system sensitive to artificial electromagnetic noise, but the biophysical mechanism is unclear. Even so, the work raises the controversial prospect that it might be necessary for humans to stop using the relevant part of the electromagnetic spectrum, says Joseph Kirschvink, a geobiologist at the California Institute of Technology in Pasadena, and the author of a commentary accompanying the paper2.

Roswitha Wiltschko, a bird navigation researcher at the University of Frankfurt in Germany, has not seen the effect in her own work. “We never used any shielding, and our birds were perfectly oriented,” she says. “This is really a surprising thing for me that there can be such a strong disrupting field.”

Wiltschko cautions against concluding that electromagnetic noise affects migratory birds in all cities, but other researchers report seeing evidence of the phenomenon. “These effects are real,” says John Phillips, a sensory biologist at Virginia Tech in Blacksburg. Phillips conducts behavioural studies related to navigation and spatial memory in other species, including mice and newts, and shields them from electromagnetic interference that he contends could skew experiments. “You wouldn’t study a vision mechanism with flashbulbs going off at irregular intervals,” he says.

Mouritsen plans further work on the effects of electromagnetic noise, in part to examine the precise workings of the birds' magnetic sense. But he says that noise could already be causing practical problems for birds: “If birds can’t use one of their most significant compasses when they are in towns, what effect will that have on survival?”