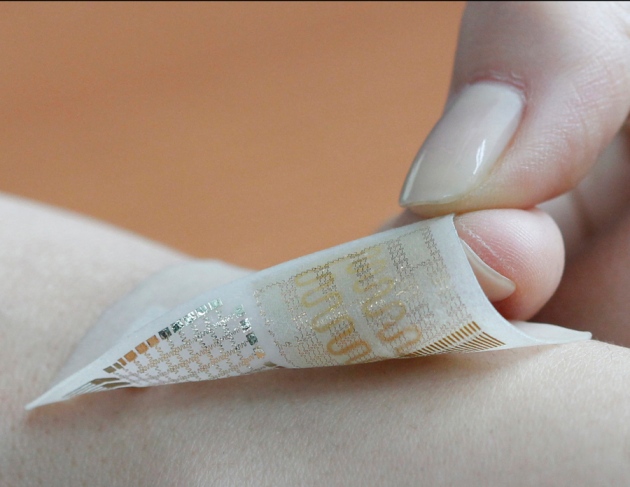 Wearable sensors have until now been unable to store data locally.

Researchers have created a wearable device that is as thin as a temporary tattoo and can store and transmit data about a person’s movements, receive diagnostic information and release drugs into skin.

Similar efforts to develop ‘electronic skin’ abound, but the device is the first that can store information and also deliver medicine — combining patient treatment and monitoring. Its creators, who report their findings today in Nature Nanotechnology1, say that the technology could one day aid patients with movement disorders such as Parkinson’s disease or epilepsy.

The researchers constructed the device by layering a package of stretchable nanomaterials — sensors that detect temperature and motion, resistive RAM for data storage, microheaters and drugs — onto a material that mimics the softness and flexibility of the skin. The result was a sticky patch containing a device roughly 4 centimetres long, 2 cm wide and 0.3 millimetres thick, says study co-author Nanshu Lu, a mechanical engineer at the University of Texas in Austin.

“The novelty is really in the integration of the memory device,” says Stéphanie Lacour, an engineer at the Swiss Federal Institute of Technology in Lausanne, who was not involved in the work. No other device can store data locally, she adds.

The trade-off for that memory milestone is that the device works only if it is connected to a power supply and data transmitter, both of which need to be made similarly compact and flexible before the prototype can be used routinely in patients. Although some commercially available components, such as lithium batteries and radio-frequency identification tags, can do this work, they are too rigid for the soft-as-skin brand of electronic device, Lu says.

Even if softer components were available, data transmitted wirelessly would need to be converted into a readable digital format, and the signal might need to be amplified. “It’s a pretty complicated system to integrate onto a piece of tattoo material,” she says. “It’s still pretty far away.”

This story originally said that the patch is 0.003 mm thick instead of 0.3 mm. The text has now been corrected.