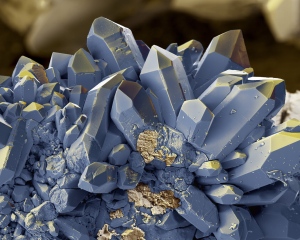 When bombarded with electrons, the mineral quartz glows blue.

Put a piece of quartz under an electron microscope and it will shine an icy blue. First noticed in the 1960s, the phenomenon, called cathodoluminescence, gave geologists an easy way to identify quartz and other minerals in rock samples. But the light — emitted after a beam of electrons kicks a material’s own electrons into a higher-energy state — is faint and diffuse, and that discouraged other scientists from harnessing it for fine-scale imaging.

Now a Dutch group has found a way to collect and focus a particularly faint and localized type of cathodoluminescence that had been previously ignored, turning the glow into a precise probe of a material’s nanoscale structure. The researchers expect the technology to reach the market early this year, giving materials scientists a new tool for investigating the behaviour of light in the interiors of the complex nanostructures used in lasers, light-based circuits and solar cells.

“We have built a cathodoluminescent system that is unique in the world,” says Albert Polman, a physicist at the FOM Institute for Atomic and Molecular Physics (AMOLF) in Amsterdam.

The technique combines the advantages of optical and electron-based imaging. An electron beam can in principle achieve a resolution of less than one nanometre, compared with hundreds of nanometres for a beam of light. But maps made by scattered or reflected electrons are not typically sensitive to the way light behaves in the sample. Cathodoluminescence, by contrast, can map the interaction of light and matter — but, because it is triggered by a narrow beam of electrons, it promises the same nanometre-scale resolution that those systems can achieve.

“This has opened the door to understanding how light couples to matter in a more fundamental way,” says Harry Atwater, a physicist at the California Institute of Technology in Pasadena, who worked with Polman on cathodoluminescence in the past but is not involved with the work on the latest technique.

Key to the system is ultraprecise alignment of the sample. The device includes a carefully shaped parabolic mirror that collects photons as they emerge from a sample bombarded with electrons. It sends them through a system of lenses and a spectrometer to resolve the origin and energy of the light (see ‘Metamaterial TV’). The device is sensitive enough to pick up a signal even from materials that are barely luminescent, such as metals. Just as in an old-fashioned cathode-ray-tube colour television, the electron beam scans the sample to build up an image line by line. 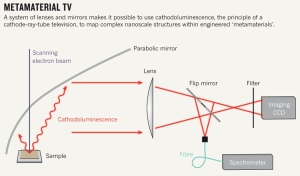 Already, the Dutch group, along with collaborators in the United States and Spain, has used the technique to tease out how certain nanostructures interact with light. In a recent paper studying a layered construct of silver, glass and silicon, they show that the phase velocity of visible light — the speed at which the peaks and troughs of the wave travel through the material — is so fast that it is effectively travelling in a vacuum, the explanation for the material’s overall refractive index of zero (E. J. R. Vesseur et al. Phys. Rev. Lett. 110, 013902; 2013).

The effect had been predicted in such layered structures, called metamaterials, but observing it required a higher-resolution map of light emission than earlier techniques could produce. The team has also mapped the distribution of light in the silicon nanodiscs that are used as a coating on solar cells to improve efficiency, and in the ultra-small cavities of photonic crystals — components of chip-based lasers and light-emitting diodes.

“This has opened the door to understanding how light couples to matter in a more fundamental way.”

Lukas Novotny, an optical physicist at the Swiss Federal Institute of Technology in Zurich, says that cathodoluminescence could be a useful tool for improving the performance of light-emitting devices and solar cells, because the light-emission maps created with the technique reflect the local density of electro­magnetic states, a quantity that determines how well light couples to matter and vice versa. “This information is key,” he says.

The optics start-up company Delmic, based in Delft, the Netherlands, has licensed AMOLF’s cathodoluminescence technique, and Polman says that the company will soon be selling the devices to materials researchers in universities for between US$100,000 and $200,000; later it may target the laser, semiconductor and solar-cell industries. He realizes that, by selling the system, he may create competitors for his own research. But he says that that will be more than made up for by the creation of a community of scientists using cathodoluminescence outside the ranks of geologists. “We want to motivate people to get out there and do this,” he says.