Scientists are unanimous that their current theory of physics is incomplete. Yet every effort to expose a deeper theory has so far disappointed. Now the most sensitive test yet of the shape of an electron — a property that could expose underlying 'new physics' — has failed to find hints of anything novel. The finding rules out a number of favoured ideas for extending physics, including some versions of a popular idea called supersymmetry.

The result came from a search for the so-called electric dipole moment in the electron. A familiar example of a dipole is a bar magnet, which is shaped like a dumbbell with a north and a south pole. Electrons are traditionally thought of as spherical, but if they had dipole moments, they would be slightly squashed. “It’s a question of: Does the electron look the same no matter which way you look at it?” explains physicist Jony Hudson of Imperial College London. “The dipole moment is physicists’ technical way to describe if it’s symmetric or not.”

The Standard Model of particle physics, which describes all the known particles in the Universe, predicts a practically zero electric dipole moment for the electron. Yet theories that include additional, yet-to-be-detected particles predict a much larger dipole moment. Physicists have been searching for this dipole moment for 50 years. Now a group called the ACME collaboration, led by David DeMille of Yale University and John Doyle and Gerald Gabrielse of Harvard University, has performed a test 10 times more sensitive than previous experiments, and still found no signs of an electric dipole moment in the electron. The electron appears to be spherical to within 0.00000000000000000000000000001 centimeter, according to ACME’s results, which were posted on the preprint site arXiv. “It’s a surprise,” says Ed Hinds, also of Imperial College London, who worked with Hudson on the previous best limit, set in 2011. “Why on Earth is it still zero?”

The experiments are probing the quantum nature of an electron. According to quantum mechanics, all particles, including the electron, should give rise to a cloud of virtual particles around them that continually sweep in and out of existence. If the Standard Model is all there is, then these virtual particles would be everyday, run-of-the-mill particles. But if more-exotic particles are out there, they should pop up in the virtual clouds around electrons, causing the clouds to be asymmetric — in other words, causing an electric dipole moment. 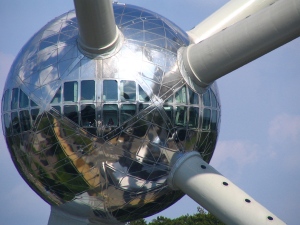 Atomium: This famous structure was built in 1958 for the Brussels Universal Exposition.

To search for this asymmetry, scientists spin electrons to test whether they are round or oblong. Whereas a billiards ball will spin smoothly, an egg will wobble. The same goes for an electron with an electric dipole moment. The ACME researchers looked at electrons in thorium monoxide molecules, whose heavy mass and special characteristics would make wobbling more conspicuous. “Their choice of molecule is very clever,” says Hudson, whose experiment uses another molecule, called terbium fluoride. “I’m sort of jealous — I wish I’d thought of that.” Previous generations of experiments looked for the effect on single atoms, which turned out to be much more difficult. The ACME scientists relied on careful measurements with microwave spectroscopy to notice any wobbling, and labored to keep their experiment free of magnetic fields or other contaminants that could cause systematic errors. “It’s hard because there are a lot of things that can mimic the effect, and the dipole moment is just so small,” says Ben Sauer, another member of the Imperial College London team.

The new result deals a significant blow to many new physics theories, most notably supersymmetry, a favored idea that suggests each known particle in the Universe has a supersymmetric twin particle that has yet to be discovered. “Supersymmetry is so elegant and somehow feels so natural that many people were starting to believe it was right,” Hinds says. But if they exist, all these twin particles should arise as virtual phantoms in the cloud around electrons, giving it a measurable electric dipole moment. The lack of one so far backs supersymmetry into a pretty tight corner. “It’s getting close to the point where it’s make or break for supersymmetry,” Hudson says.

Although some basic models of the theory have been ruled out by the latest measurement, more-complex models predict a small electric dipole moment that could be hiding in the range physicists have yet to search. “You can endlessly make models of supersymmetry,” says Eugene Commins, an emeritus professor of physics at the University of California, Berkeley, who led the last search for the dipole moment in atoms. “A good theorist can invent a model in half an hour, and it takes an experimentalist 20 years to kill it.”

Searching for supersymmetric particles is one of the prime goals of the Large Hadron Collider (LHC), the world’s largest particle accelerator, which smashes protons together at near light speed in a tunnel underneath Switzerland and France. The accelerator is big enough to probe energies around a teraelectron-volt (TeV) — right at the energy range predicted for supersymmetric particles. So far, it has seen signs of no new particles except for the last missing piece of the Standard Model of particle physics, the Higgs boson.

“If there’s new physics at the energy range where LHC is probing, you would have expected that it would also produce a dipole moment substantially bigger than the limit we now have,” Hinds says. “Now that this new result is out, you’re certainly making it highly unlikely that there’s anything going on at the TeV level.” Undeterred, however, the electron experimentalists will continue competing to push the dipole limit lower and lower, in hopes that a signal may yet be found, and physicists are eagerly awaiting the results from LHC’s next run in 2014, when it turns back after a hiatus at higher energies than ever before.