This must be one of the more bizarre videos to accompany a scientific paper this year: an electric eel leaping out of a tank to shock a fake alligator head. The experiment, which demonstrates how eels react to half-submerged predators by leaping up out of water and administering defensive volleys of high-voltage electricity, is the brainchild of Kenneth Catania, a biologist at Vanderbilt University in Nashville, Tennessee.

Catania first spotted the behaviour during earlier laboratory experiments with electric eels (Electrophorus electricus), when they would leap upwards to attack a metal-rimmed net as he was trying to fish them out of their tanks. He analysed it by presenting the eels with carbon rods and aluminium plates at which they struck; the video’s plastic alligator, with its flashing light-emitting diodes that are powered by the eel’s electrocution, is his dramatic demonstration of the effect. The results are published this week in the Proceedings of the National Academy of Sciences1.

The behaviour allows eels to directly shock their opponents, rather than having their voltage dissipated by water. It is the first time that this has been recorded in a research paper, Catania says — although he argues that his discovery supports a widely disbelieved observation made more than 200 years ago by the Prussian explorer and naturalist Alexander von Humboldt. In a paper published in 1807, von Humboldt recounted2 that he had seen South American native fishermen herding horses into a pool of electric eels; the eels would discharge themselves against the horses and could be fished safely when they were exhausted. 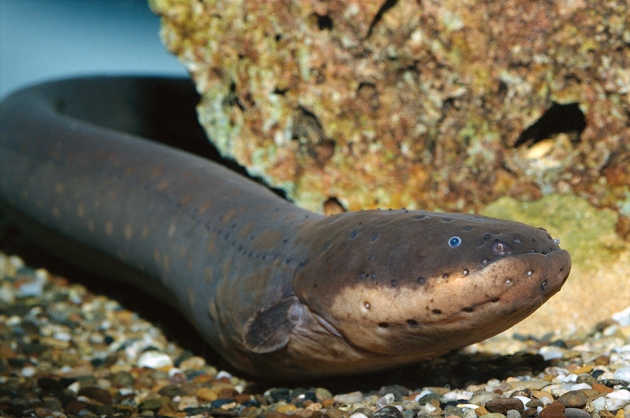 Harold Zakon, who studies electric fish at the University of Texas at Austin, says that the work is an attractive blend of science history and experimental science. “What makes Ken's paper so nice is that, like an eel, Ken made a leap: from a behaviour that he noticed to Humboldt's account. Then he did the experimental work to get the details,” he says.

Catania says that his latest work adds to findings that electric eels are more sophisticated than just being crude giant batteries that discharge shocks. For example, as he showed in research that made media headlines in 2014 and 2015, eels on the attack can use their electricity first to force prey to twitch, then — like a taser — to freeze the muscles of their victims, and finally to monitor fast-moving prey3, 4.

Catania doesn’t know what he’ll study next, but adds that one of the biggest questions about eels is still unresolved: no one knows how an eel can electrocute its victim without shocking itself.