The first sign of a brewing El Niño weather pattern came in January, as trade winds that normally blow from the east reversed course near Papua New Guinea. Barrelling back across the tropical Pacific Ocean, they began to push warm water towards South America. Now climate scientists and forecasters are on high alert.

A major El Niño event — a periodic warming of waters in the eastern equatorial Pacific — could boost temperatures and scramble weather worldwide. The most recent major event, in 1997–98, was linked to thousands of deaths and tens of billions of dollars in damage from droughts, fires and floods across several continents. Yet more than 15 years later, forecasting the timing and intensity of El Niño remains tricky, with incremental improvements in climate models threatened by the partial collapse of an ocean-monitoring system that delivers the data to feed those models.

El Niño often emerges during the Northern Hemisphere summer and peaks around December; forecast models can do a reasonable job of predicting its eventual strength by July, when the changes in ocean circulation that give rise to the weather pattern have become pronounced. But scientists are working feverishly to provide earlier forecasts, to allow govern­ments more time to prepare for potentially devastating weather patterns.

In 1997, the emergence of a record-breaking El Niño caught scientists by surprise, despite hints in wind and sea surface temperature data (see ‘Warming up’). The European Centre for Medium-Range Weather Forecasts in Reading, UK, was reluctant to issue early warnings because its forecast model was untested. And the model that had best predicted earlier El Niños — developed by scientists at Columbia University’s Lamont–Doherty Earth Observatory in Palisades, New York — foresaw neutral conditions.

“We were in the early days in forecasting,” says Michael McPhaden, an oceanographer at the US National Oceanic and Atmospheric Administration (NOAA) in Seattle, Washington. “Now we are much more systematic.” 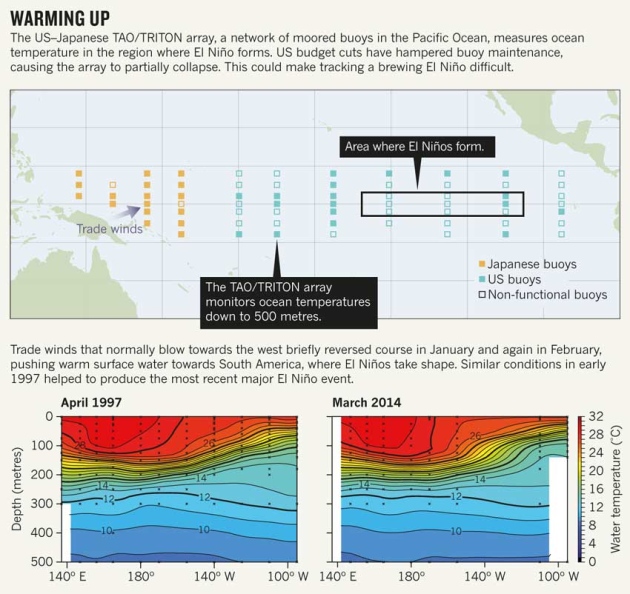 This year, NOAA issued its first forecast on 6 March, estimating a 50% chance that El Niño will develop this summer. But that early projection, and others from weather agencies and research institutions around the world, comes with lots of uncertainty. Fickle tropical winds in spring can easily quash a brewing El Niño — or strengthen it.

Researchers say that real progress in forecasting has come from systematically comparing the outputs of groups of models, with each simulation run under a range of possible climate conditions. “Combining these various predictions — doing some crowd-sourcing, if you will — tends to lead to more reliable predictions,” says Gabriel Vecchi, a climate modeller at NOAA’s Geophysical Fluid Dynamics Laboratory in Princeton, New Jersey. Averaging the results of several different forecasting models tends to cancel out flaws in an individual program, he says.

“Fickle tropical winds can easily quash a brewing El Niño — or strengthen it.”

The sensitivity of the simulations is also increasing. Global climate models divide the planet into grids, like a computer screen divided into pixels, and represent climate variables such as temperature as averages in each cell. Modellers increase the resolution of their calculations by reducing the size of the cells. Vecchi’s lab, for example, has shifted its model from a grid with cells 200 kilo­metres across to one with cells 50 kilo­metres across, thereby increasing the number of cells by a factor of 16. In theory, this allows for more-accurate representations of the microphysical processes and interactions that drive weather and ultimately climate. Forecasters also continuously fine-tune how they incorporate environmental-monitoring data and represent complex inter­actions between air and ocean circulation.

During the spring, when forecasting is most difficult, such improvements have given climate models based on physical processes a leg-up over less sophisticated statistical models, which compare the current weather-system trends to those of past years and essentially estimate the likelihood that history will repeat itself.

Almost all of this year’s initial forecasts suggest that a moderate to severe El Niño or neutral conditions will emerge in coming months. None predicts El Niño’s sister effect, La Niña, in which upwelling currents from the deep ocean bring cooler waters to the surface off the Pacific coast of South America.

In the coming weeks, scientists will watch to see if warm water continues to flow across the Pacific into the area off South America where El Niño forms. But in a potential blow to the ongoing effort to improve forecast accuracy, their ocean-temperature data will get progressively worse. A US-funded system of data-gathering buoys known as the Tropical Atmosphere Ocean (TAO) array has started to break down as a result of budget cuts that have hobbled its maintenance (see Nature http://doi.org/q72; 2014). NOAA has committed to restoring most of the system by the end of the year, but that aid will come months after crucial El Niño forecasts are issued. Scientists will be forced to supplement the buoy data with satellite observations of water temperature and sea level, which can serve as proxies for the depth of the wave of warm water.

The stakes are high. Since 1998, the eastern Pacific has been in a cold phase that is associated with La Niña-like conditions, but every 15–30 years, as part of a cycle known as the Pacific Decadal Oscillation, that trend flips. Kevin Trenberth, a climate scientist at the US  National Center for Atmospheric Research in Boulder, Colorado, has theorized that a major El Niño could help to push the ocean back into a warm phase, which studies have linked to more frequent El Niños and more rapid global warming (see Nature 505, 276–278; 2014).

But all of that depends on what happens as warm water washes across the Pacific in the next couple of months. “The system is primed,” says Trenberth. “Will it wimp out or really take off?”