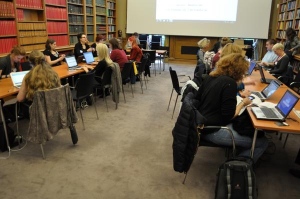 Volunteers met at the Royal Society on online to update Wikipedia entries on female scientists.

To get to the library of the Royal Society in London is to run the gauntlet of male history. The staircase up to the room is flanked by statuettes of men, predominantly Isaac Newton, and artefacts bearing their faces. It is overlooked by a huge plaque listing the 61 presidents of the Royal Society — all men. The library itself is ringed by ten busts of famous scientists; the only female face among them is nineteenth-century Scottish mathematician, astronomer and science writer Mary Somerville.

It was in this august setting that around 20 volunteers gathered on 19 October, laptops and iPads at the ready, to address the gender inequality that afflicts another important institution — Wikipedia. Over the course of three and a half hours, they improved and added online encyclopaedia entries for female scientists, engineers and mathematicians who had previously been recognized, if at all, with only stubby articles and throwaway lines.

This 'Edit-a-thon' was hosted by the Royal Society to tie in with Ada Lovelace Day on 16 October — a celebration of female scientists, named after a nineteenth-century trail-blazer of computer programming. Lovelace’s own Wikipedia entry runs to almost 4,000 words but other scientific women are far less recognized. “Wikipedia has become the default first place that people go for information,” says Suw Charman-Anderson, who founded Ada Lovelace Day in 2009. “The fact that there are so few women with pages is really a problem.”

“Making women more visible is a huge job that’ll take a long time. This is a spark. It has awakened a lot of interest,” says Uta Frith, a neuroscientist at University College London and one of the leaders of the event.

The volunteers included 15 editors, all women, and four experienced members of the Wikipedia community who taught them the ropes. The team worked from a wish list of almost 200 women whose entries need creating or expanding.

Seirian Sumner, an entomologist at the Zoological Society of London, created an entry for Mary Barber, a nineteenth-century natural historian whose collections influenced Charles Darwin’s ideas on orchids and their moth pollinators. Frith had meant to create an article for Mary Buckland, a nineteenth-century palaeontologist and illustrator who collaborated with her husband, William, but warranted only three lines in his entry. But after mentioning her interest in Buckland in an interview last month, Frith was surprised to find on Friday that the entry had already been created. “I was scooped!”

It was a sign that the edit-a-thon extended well beyond the Royal Society. Editors chipped in from across the United Kingdom and other countries, discussing their efforts on Twitter with the hashtag #WomenSciWP. Together, they created or expanded about 40 entries.

It seems almost incongruous to gather editors at a specific event, given that Wikipedia can be tweaked at any time and place. But Charman-Anderson sees great value in rallying a community. “It gives you moral support,” she says. “When you feel in a minority to start with, it’s important to feel that lots of people around you are taking the same plunge.” 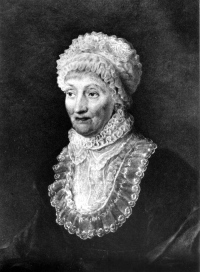 Astronomer Caroline Herschel was one of those to get full entry on Wikipedia.

“I'd been meaning to add Wikipedia content and this was motivation I needed,” says Elizabeth Bruton, a student of the history of science at the University of Leeds, UK, who edited three pieces from afar.

The event also helped to steel participants to get involved in Wikipedia in the face of what can be an off-putting culture. “It kind of motivated me to try again. I [had] been scared off by former edits being deleted,” says Karen Masters, an astronomer at the University of Portsmouth, UK, who edited two entries off-site. Charman-Anderson recalls having the same experience. “As a new user, it can feel like your work is immediately suspect,” she says. To keep going “might take stubbornness and even a hint of bravery”.

These factors might help to explain why Wikipedia has a gender skew in its contributors, as well as its content — women comprise fewer than 15% of the site’s editors. “We want people to have the knowledge and confidence to go home tonight and carry on editing, and increase the number of women who are engaging with Wikipedia,” says Charman-Anderson. “If we don’t do it, no one will.”