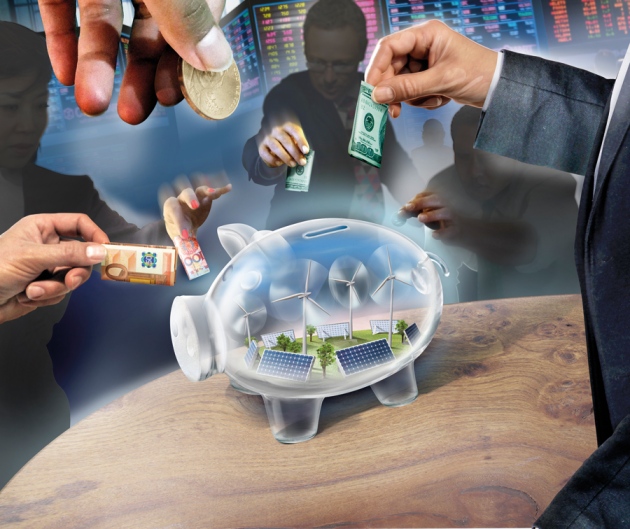 Markets and governments are converging to address climate change. As scientific evidence and government actions strengthen, investors and financiers are reducing the exposure of their portfolios to risks from rising greenhouse-gas emissions. They are allocating more capital to low-carbon activities and less to carbon-intensive industries1.

In September 2014, banks, insurance companies, charities, and pension, mutual and endowment funds announced that they would direct an extra US$125 billion per year until 2020 to investments that address climate change. Fossil fuels are being divested from by influential funds, including the Rockefeller Brothers Fund of New York, and universities in the United States, the United Kingdom and Australia.

Those commitments represent just the tip of the financial iceberg. Around $300-trillion worth of assets is managed globally2 and more than $20 trillion of new investment is forecast to flow into the global economy each year3. Private finance has the capacity to fund the wholesale shift to a low-carbon economy that the world needs to keep global warming to within 2 °C, the limit agreed on by national governments. The International Energy Agency estimates that such a transformation could be achieved by a sixfold increase4 in annual investments in clean energy and energy efficiency, from around $390 billion in 2013 to $2.3 trillion per year by 2035 (see 'Investors clean up'). 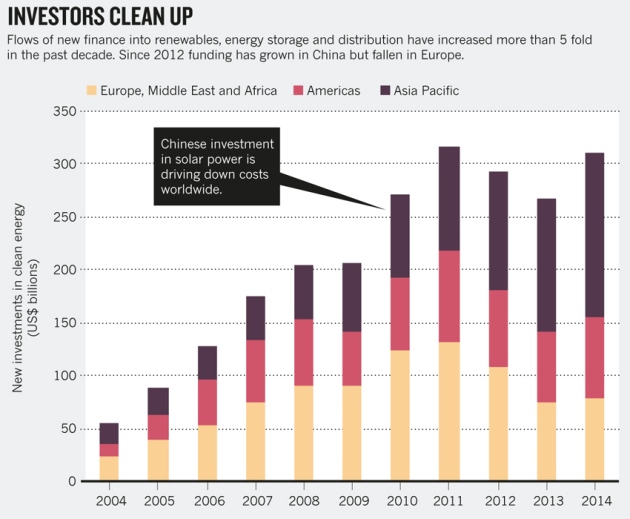 Government policies are the sticking points. Carbon pricing, favourable tax regimes and rebalancing of subsidies will encourage demand for low-carbon capital. Supply will be increased by government support for research and development and improved financial policies. Countries that understand these dynamics will benefit from more private financing and clean growth, as are Vietnam and Germany now. Those that do not will be left squeezing the last remnants of value out of waning industries.

Putting portfolios on a lower carbon footing is in the interests of financiers. In exchange for providing capital to support economic activity, investors earn a return, at a rate that reflects the level of risk. Because of the growing costs of emissions, low-carbon activities such as renewable energy and green buildings are a safer bet than many carbon-intensive ones. The prospect of unburnable fossil-fuel reserves makes many new coal and tar-sands projects too risky to invest in. 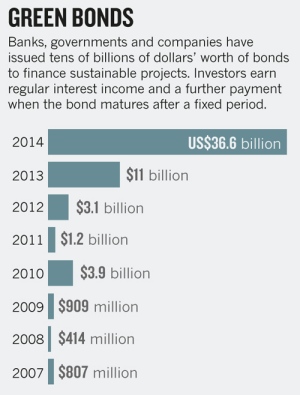 Policies can also make low-carbon investments profitable. For example, tax credits are provided for renewable-energy projects in the United States. Feed-in tariffs (payments for energy supplied to the grid) are offered in Germany, Malaysia and South Korea. Carbon-pricing schemes now cover 22% of global emissions. Public institutions such as the World Bank and the European Investment Bank are issuing green bonds in record volumes (see 'Green bonds'), and there are more than ten government-funded green investment banks around the world that co-invest with the private sector to reduce risk and improve financial returns. By contrast, fossil-fuel commodity markets are volatile and threatened by political instability.

Banks and investors increasingly see climate change as a raft of risks that they must respond to directly rather than waiting for governments alone to fix (see ‘Black to green’). For example, by early 2015, nine international banks had chosen not to invest in the development of the Carmichael coal mine in Queensland, Australia, which is part of one of the largest coal basins in the world. Leading financiers are also under public pressure to manage risk more carefully. Former US Secretary of the Treasury Hank Paulson wrote last year5 that he sees the emerging “climate bubble” as an equally enormous danger to the world economy as the 2008 financial crisis.

Low-carbon investment announcements totalling more than US$600 billion at the 2014 United Nations climate summit in New York highlight how the market is moving.

Foundations are abandoning fossil fuels. The Rockefeller Brothers Fund, an investment fund based on oil wealth, led a $50-billion coalition that will divest from fossil fuels in the next three to five years.

University endowments are shifting capital out of emissions-intensive activities. Stanford University in California is selling its shares in coal companies; Britain's Glasgow University is freezing new fossil-fuel investments; and in February 2015, the University of Sydney in Australia announced a three-year plan to cut the carbon footprint of its investments by 20%.

Pension funds are following suit. The four regional investor groups on climate change (for Europe, North America, Australia and New Zealand, and Asia) asked fossil-fuel companies in 2014 to justify expenditure on expanding reserves. The pension funds CalSTRS, APG and PensionDanmark committed up to $31 billion in low-carbon allocations by 2020. The Portfolio Decarbonization Coalition, a group of pension funds and fund managers established in September 2014 and led by the UN Environment Programme Finance Initiative, is encouraging investors to decrease the carbon exposure of $100 billion of assets by the end of 2015 (see go.nature.com/fczzfd).

Financial regulators too are indicating that short-term returns should no longer come at the expense of a stable economy and financial system. In June 2014, the UK Law Commission clarified that trustees should account for any factor that is relevant to the financial performance of an investment6, including environmental impacts.

Better risk analysis from scientists is needed to reinforce policies and accelerate the reallocation of capital. It is especially important to understand non-linear forces such as carbon-cycle feedbacks that could influence global warming, as well as information about rare but severe impacts such as extreme weather events, even at low levels of warming.

How should the low-carbon economy be financed? Robust banking systems, transparent governance and stable currencies are baseline requirements. Predictable long-term energy policies and emissions-reduction frameworks are an essential overlay. If any of these aspects are missing, publicly funded measures can assist. Governments can also raise awareness, build partnerships and change financial regulations to increase private finance flows.

The finance sector's priorities for climate policy were outlined in a statement signed by around 350 institutional investors contributing more than $24 trillion, presented at the United Nations climate summit in New York last September and delivered to the Group of 20 (G20) governments ahead of its November 2014 meeting in Brisbane, Australia (see investorsonclimatechange.org). The priorities are: carbon pricing, targets or subsidies for renewable-energy and low-carbon technologies, phasing out fossil-fuel subsidies and addressing unintended constraints on the financial system, such as policies that hamper information flows or reduce the availability of investable capital. The United Kingdom, Brazil and the state of California have brought investors into their climate and energy policy-making circles to get the details right.

Carbon pricing is a tool that markets understand. Emissions-trading schemes, carbon taxes or any other mechanism that applies a cost to releasing greenhouse gases are the best ways to distribute the burden of emissions reductions, encourage the market to innovate and achieve abatement cheaply. With lessons learned from the European Union's Emissions Trading Scheme, 73 countries supported the World Bank's renewed push on carbon pricing at the New York summit. Regulation and subsidies — such as fuel standards for cars or emissions standards in energy generation — are not as efficient, flexible or scalable. That said, they have a complementary role and can help to offset existing fossil-fuel subsidies.

Yet governments are vacillating. Spain and Italy have rowed back on emissions reduction and green-technology commitments. Energy feed-in tariffs and renewable-energy targets remain under threat in Australia, whose emissions-trading scheme was repealed in 2014. Financiers now question the economic credentials of such governments. Convinced of the benefits of low-carbon investments, they will increasingly take their money elsewhere.

Capital is mobile. Pension funds, asset managers and insurance companies allocate up to 50% of their assets to international markets. Even though cross-border, low-carbon financial flows have been relatively low7, they will grow as policies improve, investor experience increases, trade costs come down and new opportunities emerge. Investors will shift more capital to the offshore markets that best meet their long-term objectives. 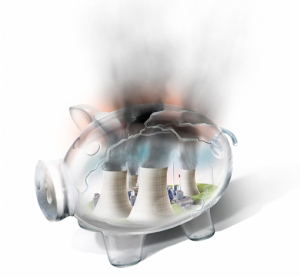 The role of private finance should be taken more seriously in the international climate-negotiation process. Political posturing on the relative levels of emissions cuts is too far removed from the workings of the real economy. As well as negotiating with each other, countries should pitch their emissions-reductions plans to the finance community for input and capital at international meetings such as the G20 summits.

Finance flows to less developed and emerging economies will help to achieve the 2 °C goal. Multilateral and national development banks must continue to expand their roles. Investment funds and financial instruments that reduce currency volatility, select the best projects and partially absorb unexpected losses can increase financial flows. The Private Sector Facility of the Green Climate Fund — a component of the UN Framework Convention on Climate Change — will play an important part in leveraging private finance, increasing the size and impact of public climate finance.

Even with the best of intentions, policy missteps will occur. Financiers should see through short-term policy volatility by backing governments with clear low-carbon policy agendas and making them aware of the consequences of unpredictable changes. Because markets cannot solve climate change alone, authorities such as the Financial Stability Board, which monitors the global financial system, must continue to provide direction.

If appropriate policies are delivered, the capital shift that is under way will gather steam. If not, investment will not be enough to meet the 2 °C global-warming limit.

N.F. is the chief executive of the Investor Group on climate Change Australia and New Zealand, an association of institutional investors seeking to address the financial risks presented by climate change in their investment portfolios.