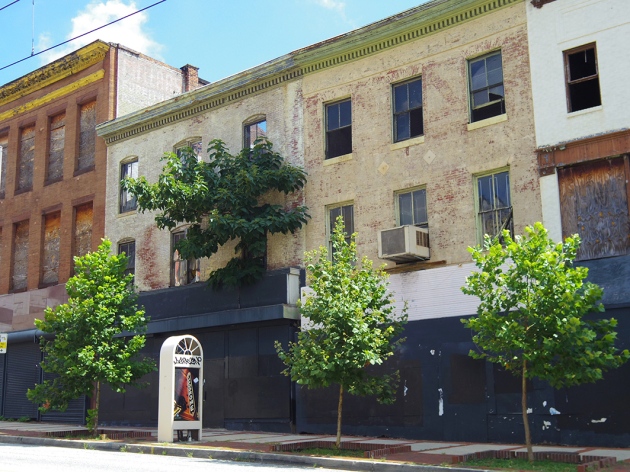 A tree grows in Baltimore: the city is at the heart of the burgeoning field of urban ecology.

A concrete megalith overshadowed by skyscrapers and surrounded by roads that roar with traffic, the convention centre in downtown Baltimore may seem an inappropriate setting for an ecology conference. But the resolutely urban backdrop for the annual meeting of the Ecological Society of America (ESA) is a fitting symbol of the growing acceptance of, and interest in, ‘urban ecology’ — the study of cities and the organisms that dwell in them as ecosystems.

“In the past 10 years, it’s really become more mainstream. People’s reactions have shifted from ‘What’s that?’ or ‘Why do you do that?’ to ‘Oh, cool’,” says Laura Martin, a historian and urban ecologist at the Harvard University Center for the Environment in Cambridge, Massachusetts. She presented work at this year’s centennial meeting (which ran on 9–14 August) showing that orange jewel­weeds (Impatiens capensis) in Manhattan and other urban settings are evolving defences to incursions of certain deer that eat them (L. J. Martin et al. J. Ecol. 103, 243–249; 2015).

Martin is part of a team that called at the 2010 ESA meeting for more researchers to resist ecology’s traditional bias towards pristine ecosystems.

This now seems to be happening. The sheer number of presented papers relating to cities this year points to a “phenomenal” growth of urban ecology, says Wayne Zipperer of the US Department of Agriculture Forest Service, who studies the urbanization of ecosystems in Gainesville, Florida. He recalls an ESA conference in the early 1990s that had just one oral presentation and one poster on the sub-field — this year, there were around 450 presentations, posters and events that touched on urban issues, roughly 10% of the conference total. Among them: a study of people in New York City, in particular immigrants from China, who rely on fungi and street trees such as ginkgo, white oak and linden for foods and medicines; and research showing that urban streams are as microbially diverse as wild ones.

The rise in papers shows “the maturity of urban ecology”, says Mark McDonnell, director of the Australian Research Centre for Urban Ecology in Melbourne and editor of the new Journal of Urban Ecology, which started accepting submissions in March.

Urban ecologists attribute the swell of interest in their discipline to multiple factors, including the realization that human actions are warming the planet, that people are migrating to cities in increasing numbers and evidence that the study of urban ecosystems provides important and practical insights.

“Standing room only for urban ecology? When does that happen?”

One move in particular that spurred the field was the decision in 1997 by the US National Science Foundation (NSF) to include two cities — Baltimore and Phoenix, Arizona — in a group of more than 20 long-term ecological research (LTER) sites that it funds. The studies based on these sites “changed the way ecologists feel about working in urban situations”, says Steward Pickett, an urban ecologist at the Cary Institute of Ecosystem Studies in Millbrook, New York, and director of the Baltimore LTER site.

The studies are offering up results. Among many findings, the Baltimore Ecosystem Study showed that urban streams — historically considered useless dead zones — retain nitrogen run-off from fertilizers, providing a valuable ‘ecosystem service’ by preventing the nitrogen from reaching other water courses where it can spawn damaging algal blooms.

Such findings are becoming ever more important as both the absolute number of people and the proportion of the world’s population living in cities grows, and as cities seek resilience to the effects of climate change, said sustainability scientist Nancy Grimm to meeting attendees. In July, researchers including Grimm — who heads the Phoenix LTER project from Arizona State University in Tempe — launched the Urban Resilience to Extremes Sustainability Research Network, a US$12-million project funded by the NSF. The aim is to work out how cities can be designed to better withstand storms such as Hurricane Sandy, which hit New York in 2012, and Hurricane Katrina, which tore apart New Orleans in 2005. Such extreme weather events are predicted to become more frequent in future.

The behaviour of ecologists at the meeting suggests that they may already be converts. As one session started, Madhusudan Katti, an ecologist at California State University in Fresno, looked around as people continued to file into the overcrowded room. “Standing room only for urban ecology?” he said. “When does that happen?” Jon Christensen, a historian of science and the environment at the University of California, Los Angeles, detects another sign that a shift has occurred. “The city is no longer ‘the other’, the negative example contrasted with the pristine,” he says. “Urban ecology has arrived.”