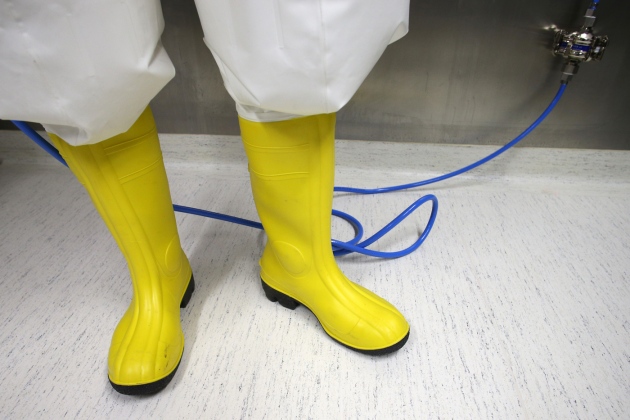 The number of nations with a top-level infectious-disease lab has grown with Japan's upgrade of an existing facility.

Japan is set to join an elite club with its decision to upgrade an existing infectious-disease lab to handle the most-hazardous pathogens. The move sweeps away more than three decades of political opposition to operating a top-biosafety-level facility 30 kilometres west of Tokyo in the city of Musashi-Murayama.

An agreement reached on 3 August between Japan's health ministry and the mayor of Musashi-Murayama clears the way for the facility to begin limited work with pathogens such as the Lassa and Ebola viruses. Japan's National Institute of Infectious Diseases (NIID) built the biosafety-level-4 (BSL-4) lab in 1981, but it has been limited to operating as a BSL-3 lab because of community safety concerns. Fears that Ebola might reach Japan during last year's outbreak in West Africa partly motivated the policy change.

The deal sets several conditions for the lab's activities: the NIID has committed to maintain transparency in reporting lab operations and any accident, and the lab must also restrict its BSL-4 work to diagnosing and treating patients instead of running a broader research programme. However, virologist Ayato Takada at Hokkaido University in Sapporo, Japan, hopes that the agreement will ease the way for other facilities where scientists can perform basic infectious disease research at the BSL-4 level. Discussions are under way to build a bigger and more modern BSL-4 lab at Nagasaki University — a move that has similarly met with community opposition.

For the time being, Takada's studies of Ebola virus must be conducted in collaboration with international partners; he flies to the United States several times a year to perform BSL-4 experiments. "It's time-consuming and expensive," he says. "I really hope the decision at Murayama will have a good influence on the likelihood of the Nagasaki University BSL-4 plan."

The original BSL-4 infrastructure at Musashi-Murayama has been maintained over the decades, but new protocols will need to be established and staff trained for the higher-security-level work. The lab will also need to import samples from other countries to build a reference library for diagnosing suspected infections.

Typical BSL-3 labs include two sets of self-locking doors and directional airflow to prevent the escape of potentially lethal, airborne pathogens. But BSL-4 labs have extra features that protect the workers and prevent the escape of highly lethal microbes that cause infections for which there are no treatments or vaccines.

Over the years, the NIID made various attempts to gain public support for BSL-4 operations at the site, but some citizens and politicians remained concerned that the potential risks outweighed the benefits. That equation began to shift last year as the Ebola outbreak raged in West Africa. Japan, like many other countries, worried that the virus could cross its borders through international travel.

Japan joins a growing club of nations that have considered or expanded BSL-4 capabilities over the past decade — many spurred by the 11 September 2001 terrorist attacks. The Federation of American Scientists in Washington DC, a non-profit organization specializing in security matters, estimated in 2011 that roughly 40 BSL-4 labs existed or were under construction worldwide, although some researchers consider that an overestimate.

"It was odd that a global player in science and a highly developed industrialized country such as Japan has not had that type of facility. It's brilliant that they have one now," says virologist Paul Duprex at Boston University School of Medicine in Massachusetts.

Others, however, argue that BSL-4 labs serve only a small slice of infectious-disease research, and that existing facilities already exceed global needs. "BSL-4 facilities are fantastically expensive to construct and operate, and that comes at the cost of other areas of biomedical research," says molecular biologist and biosecurity specialist Richard Ebright at Rutgers University in Piscataway, New Jersey. Although the Musashi-Murayama lab itself is limited in scope, Ebright says, "the most likely impact is that this will influence more nations to join this club."

As the result of an editing error, this article wrongly characterized BSL-4 labs as being inherently unsafe. The text has now been amended.