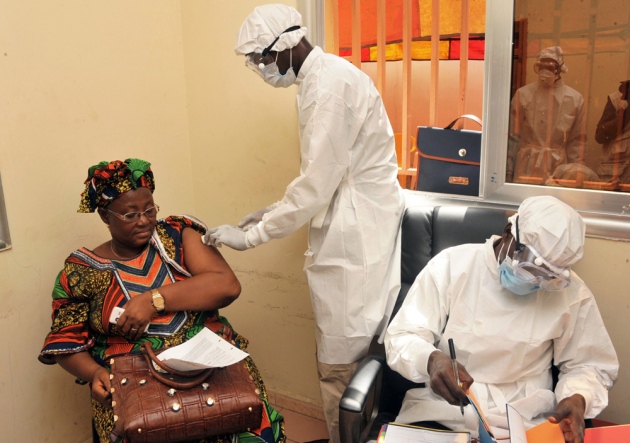 A woman gets vaccinated on 10 March 2015 at a health centre in Conakry, Guinea, during the first clinical trials of the VSV-EBOV vaccine against the Ebola virus.

The Ebola virus is evolving more slowly than previously thought, contends a controversial study of viral genomes from the current West African epidemic. The findings, published in Science on 26 March1, allay concerns that the pathogen could become more difficult to control and thwart therapies and vaccines in development.

But other experts say that the paper’s focus on the pace at which Ebola virus is changing is misplaced; the more important issue is whether the virus has gained mutations that make it more transmissible or dangerous to humans.

The ongoing epidemic, which has killed more than 10,000 people, mostly in Liberia, Sierra Leone and Guinea, is now waning. But researchers say that it is important to chart the evolution of the virus so that they can track its spread more accurately and watch for strains that are acquiring worrisome mutations.

The paper identified the chain of transmissions that had exported the virus from Guinea to Sierra Leone. It also noted that the Ebola viruses from West Africa contained hundreds of mutations not seen in previous outbreaks — all of which occurred farther east — including many that had altered the virus's proteins. The team estimated that the viruses were evolving at twice the rate during the outbreak, compared to Ebola’s long-term rate of change in its animal host. They speculated that mutations hindering the virus had yet to be purged from its genome through natural selection, leading to a faster rate of evolution, at least in the short term. The team cautioned that the virus could develop mutations that would make it more harmful as the epidemic wears on — but found no evidence that this had occurred.

“We have always been clear that our study only provided data for what everyone already knows — that viruses mutate,” says Sabeti. Anthony Fauci, director of the US National Institute of Allergy and Infectious Diseases (NIAID) in Bethesda, Maryland, says that many people misconstrued this observation as meaning that the virus was gaining new properties — and potentially even the ability to spread through the air, like the common cold, rather than just through direct contact with bodily fluids. “The data never said that, but it was the way people interpreted the data,” he says. “People were getting concerned.”

A paper posted to the bioRxiv.org preprint site in November, meanwhile, questioned the significance of the doubled rate of evolution4. “The conclusions ultimately left readers, and indeed the scientific community at large, with the impression that Ebola virus is fast-evolving and possibly adapting to humans,” the authors wrote, adding that more sequence data were needed to determine how Ebola was changing.

In the new Science paper, Heinz Feldmann, head of the NIAID's Laboratory of Virology in Hamilton, Montana, and his collaborators report genome sequences from two small clusters of cases, after the virus spread to Mali last October and again in November. The team used the data to recalculate Ebola’s rate of evolution. The result is a figure about half that of Sabeti’s team's, and more in line with the virus's long-term rate of evolution.

This is reassuring, Feldmann says, because vaccines and therapies being trialled in West Africa are tailored to the known sequence of the virus, as are the methods to diagnose Ebola. Rapid mutation could make those methods ineffective.

In a separate development, a paper accepted for publication in the journal Virology (and posted to bioRxiv.org in January5), a team at the University of Manchester, UK, took a closer look at the mutations in the Sierra Leone Ebola sequences and concluded that none of them had drastically altered viral proteins.

Sabeti notes that neither paper challenges her team's findings. Other researchers, meanwhile, question how Feldmann’s team calculated Ebola's rate of evolution and the importance of that figure. Andrew Rambaut, an evolutionary geneticist at University of Edinburgh, UK, who was a co-author with Sabeti, says that the difference between the rates of evolution estimated by the two teams is less important than it sounds and is due to technical details in the models each used, not to any change in the dynamics of the epidemic.

“The debate over rates of evolutionary change, which is central to this paper, rather misses the point,” University of Sydney evolutionary biologist Edward Holmes says of the work by Feldmann's team. “It is simplistic to think that these minor differences in rate estimates will translate into radically different evolutionary trajectories.”

Trevor Bedford, an evolutionary geneticist at the Fred Hutchinson Cancer Research Center in Seattle, Washington, says that the focus should instead be on identifying viruses that have somehow adapted to humans, such as those that spread more quickly, and the mutations underlying these changes. "The overall rate of mutation is probably not as important," he says.

Efforts to chart the evolution of the epidemic in real time have been hindered by a lack of data. Around 240 sequences are publicly available, most of them deposited by Sabeti's team, and few are from Guinea or Liberia or from more recent cases in Sierra Leone. Export restrictions on infectious materials are the main culprit, say researchers. Deploying portable DNA-sequencing machines in the field could help to unclog such bottlenecks in future outbreaks.

Even though the epidemic is waning, researchers are still watching the virus closely. “The real danger here is that the ongoing epidemic is allowing the virus to change itself and that’s how evolution works,” says David Robertson, an evolutionary biologist at the University of Manchester who co-led the study to be published in Virology. “It’s easy to look back now a year later and say everything was under control, but it could have got a lot worse.”