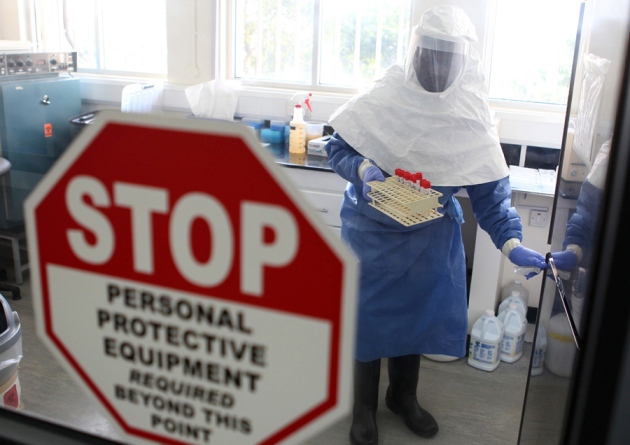 Workers at a biosafety-level-3 lab in Entebbe diagnosed recent cases of Ebola.

Film-goers know the script: a frightening infectious disease emerges somewhere in the developing world. Masked health-care workers arrive, blood samples are rushed to an airfield and the grim diagnosis is finally made in a state-of-the art laboratory on a different continent. But the response to the Ebola infections that have killed at least 16 people in Uganda since early July departed from the script — a laboratory in Entebbe, near Uganda’s capital Kampala, has passed its first major test after taking a leading role in confirming and tracking the infection.

The lab, run by the US Centers for Disease Control and Prevention (CDC) and based at the Uganda Virus Research Institute (UVRI), tests tissue samples from patients with symptoms of the viral haemorrhagic fever. Its proximity to the outbreak (see ‘Local hero’) has helped to speed up the response, and the outbreak now seems to be under control. The episode highlights the advantages of having sophisticated surveillance labs in parts of the world where infections are likely to emerge, says Eddie Holmes, a geneticist who studies emerging infections at Pennsylvania State University in University Park. “The CDC making a commitment to this lab is a tremendous step forward.”

The laboratory was set up after a 2007 outbreak of a newly discovered strain of Ebola called Bundibugyo, which killed 42 people. The area hit by the outbreak had no electricity and lacked the facilities to house a mobile containment lab, so scientists studying the disease set up shop at the UVRI. After the Bundibugyo outbreak subsided in 2008, the CDC invested in a permanent laboratory there that could diagnose haemorrhagic fevers such as Ebola and Marburg. Its biosafety-level-3 laboratory is safe enough to diagnose these viruses from tissue samples, but not to grow virus-infected cells for more sophisticated analyses, such as genome sequencing to study virus evolution. For that, samples are still sent to the CDC’s headquarters in Atlanta, Georgia. 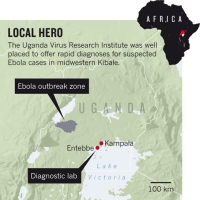 When the Entebbe lab isn’t in outbreak mode — samples still arrive daily from the country’s midwestern Kibale district — it can provide negative diagnoses for diseases with symptoms similar to those of viral haemorrhagic fever, such as bloody diarrhoea caused by shigellosis.

Uganda has had three Ebola outbreaks since 2000, so the lab should also help to catch future outbreaks early. “The earlier you catch an epidemic happening, the better you can stop its spread,” explains Joseph Fair, vice-president of Metabiota, a company based in San Francisco, California, that conducts research on emerging diseases for the US government.

In May 2011, for example, a 12-year-old girl in Uganda was admitted to hospital with a fever and bleeding from nearly every orifice. She died within hours, and doctors suspected she had been infected with a virus such as Ebola or Marburg. In the past, a conclusive diagnosis would have meant chartering a plane to airlift samples to high-containment labs across Africa or in the United States, which can take weeks. Instead, a blood sample from the girl took just three days to arrive at the Entebbe lab, which confirmed Ebola. Health-care workers reached the girl’s village a day later and helped to nip a would-be outbreak in the bud by tracking anyone who might have been exposed (T. Shoemaker et al. Emerg. Infect. Dis. http://doi.org/h53; 2012).

Without firm diagnoses, workers tracking outbreaks have to keep tabs on thousands of suspected or potential cases. But having the CDC lab so close to the outbreak means that “we can go back and forth to the site of the epidemic every day”, says Pierre Rollin, a virologist at the CDC’s Special Pathogens Branch in Atlanta, who is currently in Uganda. “Any samples collected this morning in Kibale will arrive at the lab and be tested tomorrow.” In the latest outbreak, rapid diagnosis has meant that health-care workers had to track mere dozens of suspected cases.

“Other countries are asking us if we can develop the same kind of lab for them, but we don’t have the resources to do it,” says Rollin. Instead, the CDC and other Western funders support programmes to build and run laboratories in the developing world and train their staff, so that countries can monitor and respond to outbreaks with their own resources. Gabon, for example, operates a maximum biosafety-level-4 laboratory.

“You want to build capacity in the country,” says Stephen Morse, an epidemiologist at Columbia University in New York, “and not wait until they ask for help to send people parachuting in.”