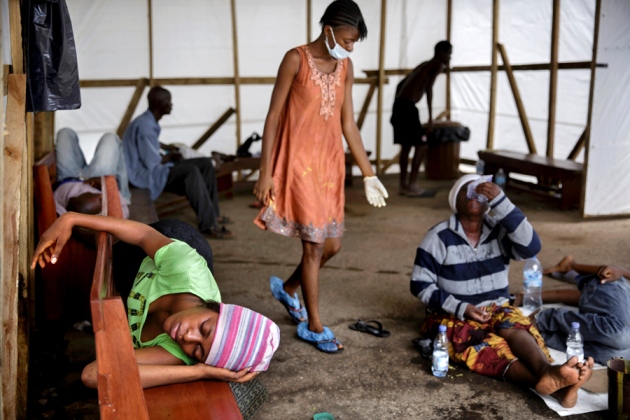 People with symptoms of Ebola often have to wait days for a diagnosis.

The Ebola crisis in West Africa is approaching the one-year mark, with no clear end in sight. At present, fewer than one in five people with Ebola is diagnosed within two days of becoming infectious, according to the World Health Organization (WHO). Yet in the absence of a safe and effective vaccine, the only way to end the epidemic is to quickly identify and quarantine people who have been infected.

A major problem is that relatively few laboratories in West Africa have the necessary equipment and personnel to test blood samples from people thought to have Ebola (see ‘Delayed diagnoses’). But that could soon change. Experts are gathering in Geneva, Switzerland, on 12 December to work out which diagnostic tools could be used wherever Ebola strikes. 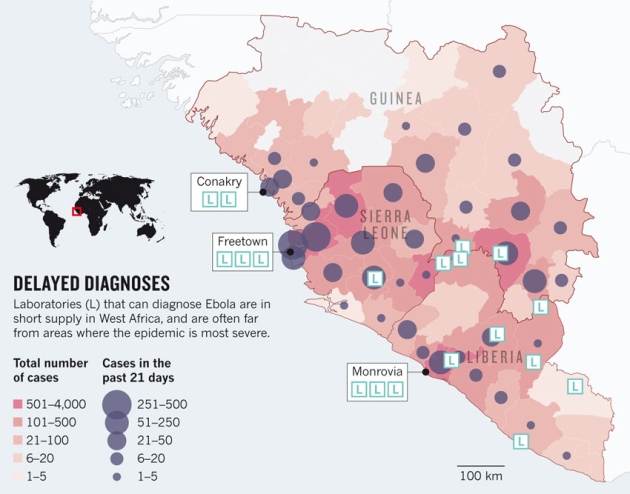 The meeting, convened by the WHO and the non-profit Foundation for Innovative New Diagnostics (FIND), also in Geneva, seeks to identify tests that can be used by untrained staff, do not require electricity or can run on batteries or solar power and use reagents that can withstand temperatures of 40 °C. Experts will also discuss how such diagnostics could be rolled out widely in Ebola-stricken areas, and will develop a six-month plan to improve access to testing. If the push succeeds, it would mark an important strategic shift in efforts to end the epidemic.

In addition to reducing Ebola’s spread, localized testing of cases would minimize care delays, says Daniel Kelly, an infectious-disease researcher at the University of California, San Francisco, who has been working in Sierra Leone (see Nature 513, 145; 2014). People die from Ebola when the rapid fluid loss from bleeding, vomiting and diarrhoea causes the heart to stop pumping blood and other organs to fail. “Every second counts,” Kelly says. “A faster time to an Ebola diagnosis will save lives.”

Most available tests for the virus rely on a technology called reverse-transcriptase polymerase chain reaction (RT-PCR), which detects genetic sequences specific to Ebola in blood, serum and other bodily fluids. These methods are highly sensitive, but require skilled scientists working in sophisticated labs that have high-level biocontainment measures. Access to consistent power supplies and refrigeration is essential, and the tests are expensive, at roughly US$100 apiece.

These requirements put such diagnostic tools out of reach of many hard-hit parts of West Africa, prompting the WHO to establish on 18 September an emergency mechanism for reviewing other, experimental tests. Those that seem promising will be sent to independent laboratories to assess whether they live up to their manufacturers’ claims; tests that succeed will be cleared for purchase by the WHO and other United Nations agencies, under a one-year emergency authorization.

So far, the WHO has received 17 applications from diagnostic companies. Although it has not released the list of candidates, many of the likely contenders and competing technologies are known.

They include 13 RT-PCR tests, many of which have been modified to make them easier to use. Several are at least partially automated: the ones that are easiest to use involve loading a blood sample into the machine, pushing a button and waiting for results that can arrive in as little as an hour. Some of the systems have also been adapted for use in harsh field environments. Mark Perkins, FIND’s chief scientific officer, expects that the WHO will approve some of these tests early next year.

The other four candidates are tests that detect antigens to Ebola in blood and other fluids — in many cases, using the same strip format and analytical technique, called enzyme-linked immunosorbent assay (ELISA), as over-the-counter pregnancy-test kits. Such tests are cheap to mass produce, do not require electricity or refrigeration and use just a drop of blood.

There are some potential drawbacks, however. The strip-format ELISA used in pregnancy-test-like diagnostics tend to be several orders of magnitude less sensitive than RT-PCR, so may not be able to detect Ebola just after symptoms appear, says Sterghios Moschos, an industrial biotechnology researcher at the University of Westminster, UK. (Moschos is developing a rapid RT-PCR test called EbolaCheck.) Other antigen-based tests use different technologies that are likely to detect Ebola early in its course.

The accuracy of antigen-based Ebola tests is of particular concern in Africa, because individuals there often carry antigens to several viruses and parasites, such as those that cause malaria, tuberculosis and hepatitis, which might muddy the results for Ebola. Tests that work well in the lab against blood and serum that have been artificially spiked with Ebola may not cope as well with clinical samples gathered in the field.

But Robert Garry, a virologist at Tulane University in New Orleans, Louisiana, who is developing an antigen-based Ebola strip test, is nonetheless confident about that approach after successfully developing a similar diagnostic for Lassa fever. Garry, who is working with diagnostics firm Corgenix of Bloomfield, Colorado, has just completed initial field trials of his Ebola test in Sierra Leone. “It’s looking very good,” he says.

Perkins is cautious. Until all the new Ebola tests are tried in the field, and independently evaluated by the WHO, “the jury is still out”, he says.