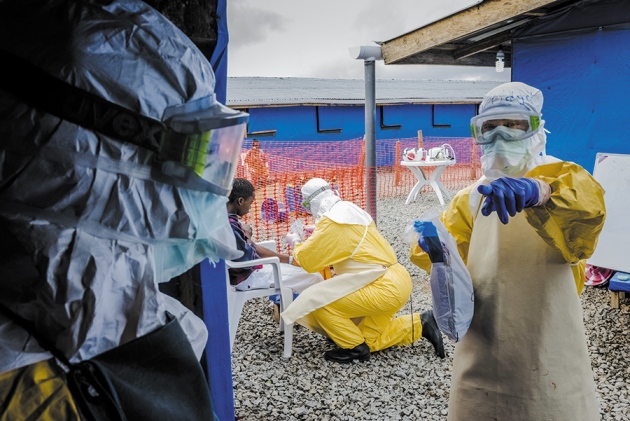 Physicians in Liberia attend to a person ill with suspected Ebola.

One year ago this month, the World Health Organization (WHO) declared the Ebola outbreak in West Africa a public-health emergency. A tremendous national and international response followed as it became clear that the epidemic would be on a scale never seen before with this disease.

As part of that response, in September 2014, my colleagues and I were funded to establish protocols for clinical trials to evaluate possible treatments. We are part of the Epidemic Disease Research Group Oxford and were funded by the Wellcome Trust, a biomedical charity in London.

Within an unprecedented 12 weeks, we had protocols approved by ethics committees, drugs to hand, and staff trained and ready to begin trials at a treatment centre in Liberia. It was thanks to an extraordinary collaborative effort involving the University of Oxford, UK, the WHO, Médecins Sans Frontières (MSF; also known as Doctors Without Borders), researchers in West Africa and many others.

But another six weeks then passed before we could start giving the drug to patients, mostly because of bureaucratic and logistical barriers (see 'Timeline to a clinical trial'). 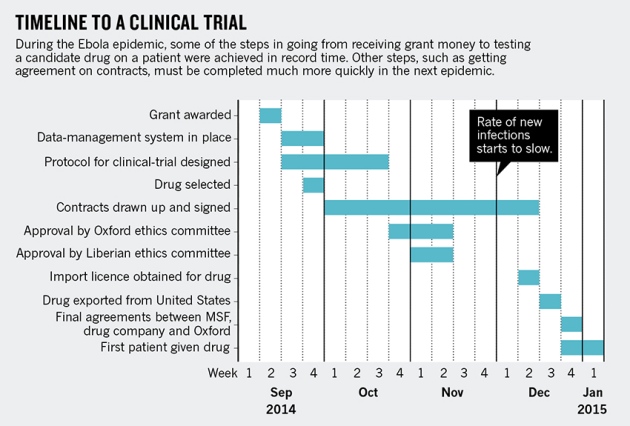 There is still no proven treatment for Ebola a year after the WHO announcement — in part because of the kinds of stumbling blocks we encountered. As the rate of new infections slowed, it became clear that there would not be enough patients to test our drug on, and we stopped the trial in February.

Government leaders must give the WHO the money and the support it needs to ensure that the world is 'research ready' for the next outbreak. A properly funded and empowered WHO could oversee the design and implementation of an on-call global task force of clinical-trial staff. It could also establish working groups to draw up template contracts so that agreements between the various players in a clinical trial can be signed off at speed. Most importantly, it could orchestrate outbreak research.

It usually takes at least 18 months to set up a clinical trial. Myriad scientific, technical, regulatory and legal challenges must be resolved before any data can be collected1. This is why there are no proven treatments for diseases such as Ebola — there had never been any clinical trials conducted during a disease outbreak2, 3. Yet by mid-November — just three months after the WHO declared the outbreak a public-health emergency — we were ready to start testing the effects of brincidofovir on patients in Liberia in a treatment centre run by MSF.

We achieved this in part by devising a clean and pragmatic protocol — it demanded no extra blood or other sampling over what would be carried out anyway as part of a patient's standard care (see ‘Three successes’).

The trial conductors (the Epidemic Disease Research Group Oxford) showed that clinical trials do not have to be expensive, slow and difficult.

The clinical staff employed did an incredible job. Many had never been to Africa before, and were plunged into gruelling conditions. Their willingness to leave their families and work long hours without dropping standards speaks to the feasibility of an on-call global task force for clinical trials.

The research teams set a precedent for data sharing, spurred by the International Severe Acute Respiratory and Emerging Infection Consortium. Teams agreed on what endpoints to measure in trials and standardized the types of data collected. They also shared experiences in meetings led by the World Health Organization, teleconferences and on a dedicated website (www.ebolaclinicaltrials.org).

Phase II and III trials, conducted since 2012 in the United States and involving about 1,000 people, had already shown that brincidofovir could clear certain viral infections from children and adults without causing worrying side effects4, 5, 6. And we knew that it would anyway be difficult to distinguish side effects of the drug from symptoms of an Ebola infection. So we decided to monitor only serious and unexpected side effects, and otherwise only verify whether patients were alive seven days after receiving the treatment (deaths from Ebola usually occur in the first few days after being admitted to a treatment centre.)

Once it had been confirmed that a person was infected, staff first needed to take the patient through the process of informed consent. They then gave enrolled patients the tablets and made observations; if the patient vomited after taking the drug, for instance, staff would need to give them a second dose.

Anything more complex, such as attempting to assess all the drug's possible side effects, would have meant monitoring several variables, from blood pressure to pain, in hundreds of patients. This would have increased both the risk of infection for the staff taking the measurements and the chance of introducing errors into the data.

Another factor that speeded things up was the astounding way that everyone on the ground came together. The research ethics committees that we worked with in both Liberia and Sierra Leone must have been flooded with requests from the research groups wanting to conduct trials. Yet we received detailed and high-quality reviews of our proposals within days of submitting them — a process that would normally have taken at least three months.

However, we encountered major stumbling blocks when dealing with the following four issues.

Difficulties in deploying African staff. We knew that hundreds of people in Africa, including nurses, clinicians and pharmacists, had the skills and experience to set up and conduct a robust clinical trial. So in October, we put out a call for clinical-trial staff on the Global Health Network (www.theglobalhealthnetwork.org) — an online forum for medical researchers in low- and middle-income countries. Within 24 hours, we had received more than 250 replies from experienced African staff.

Just a few days later, we realized that we would not be able to secure visas for the responders fast enough to ensure them adequate care should they become infected. In the end, we employed staff from the United Kingdom, Australia, France, Ireland and elsewhere — people who could be repatriated quickly if necessary. Although the visa problems did not stall progress, it would have been more appropriate and better for strengthening Africa's research capacity and international ties if we had been able to use the skilled workers from African countries.

Delays over contracts. In mid-November, we were again hampered by bureaucracy. A major difficulty was getting the legal contracts drawn up and agreed to by the various parties involved — the University of Oxford, the drug company Chimerix of Durham, North Carolina (which was supplying the brincidofovir), and MSF. MSF has shown tremendous leadership in the response to the Ebola epidemic but — appropriately — the organization is geared to delivering aid, not to facilitating research. Just as the epidemic began to show signs of slowing, we were delayed by six crucial weeks while waiting for contracts to be processed through MSF's systems, which took longer than seemed necessary.

An unorchestrated 'land grab'. By the end of 2014, five research groups, including ours, were ready to start clinical trials for candidate treatments. This meant that humanitarian agencies such as MSF, Save the Children and GOAL, as well as local health-care leaders, had to make difficult choices about what research to do where. 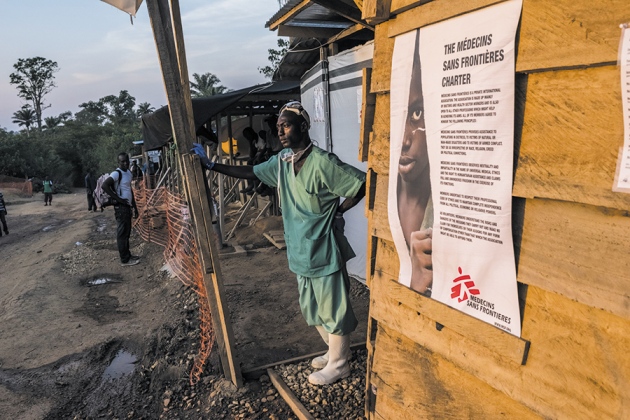 In future, visa issues must not prevent African health workers from helping with clinical trials.

For the trial that we conducted in Liberia, staff worked in pairs on 45-minute rotations to avoid overheating in the full-body suits that they had to wear in the treatment centre's 'red zone'. This meant that two trial staff could attend to only about five patients at one time. An obvious solution would have been to run the trial across multiple treatment centres simultaneously — but getting access to more centres was not feasible because of the complexity of the procedures and the time involved. Although the various teams of researchers worked hard to collaborate, for instance by standardizing methods and sharing data, on the ground it felt as if we were in a chaotic 'land grab' for sites and patients.

Ready for next time

Despite the lack of a proven treatment for Ebola, our efforts and those of other researchers over the past year will have been worth it if they help to ensure that, next time, the global community is better prepared. Humanitarian organizations routinely mobilize diverse groups of people, including local workers, to help to deliver aid after earthquakes or tsunamis; research teams need to be mobilized just as quickly.

“An international, neutral body needs to be put in charge of outbreak research.”

First, an on-call global task force consisting of, say, 100–200 clinical-trial staff spread across five different countries should be established. This could be funded by agencies such as the Wellcome Trust, or by philanthropic organizations, such as the Bill & Melinda Gates Foundation (which partners with medical humanitarian charities). These people should be employed in everyday studies and be trained for outbreak research so that they can be deployed immediately to coordinate a trial in the event of an epidemic. Research centres that are well positioned and located to handle outbreaks could collaborate and provide the missing diagnostic capacity by making their laboratory expertise known and available.

Second, contractual agreements between parties with stakes in a clinical trial will always be necessary. Probable snagging points — such as concerns over drug pricing or data ownership — are easy to predict and should be addressed to some degree ahead of time. According to one contract template, the company providing the drug would have, say, exclusive access to the data for a limited amount of time; in another, the data would be made public as soon as they are generated.

Finally, an international, neutral body needs to be put in charge of outbreak research. Before the next outbreak, such a body could hammer out the details of crisis trial staffing and contracts. Most importantly, this organization could set the research priorities during an epidemic and ensure that adequate numbers of sites and patients are allocated to the different teams involved. The WHO is the obvious agency to do this but it currently lacks the necessary funds, mandate and support.

In the case of the Ebola epidemic, instead of having multiple research groups, each struggling to complete their trial because of insufficient numbers of patients, the WHO could have directed all the teams to recruit patients for an agreed prioritized trial. This would have been a better approach scientifically and ethically. If a trial is stopped because of insufficient numbers of participants, then every patient who has taken part in it has taken a risk needlessly.

To obtain a solid evidence base for the treatment, prevention and management of infectious diseases, everyone involved in outbreak response — aid agencies, ministries of health, health-care workers on the ground — needs to have research embedded in their plans long before an epidemic takes hold. Only then can experimental treatments be tested within days, not months.