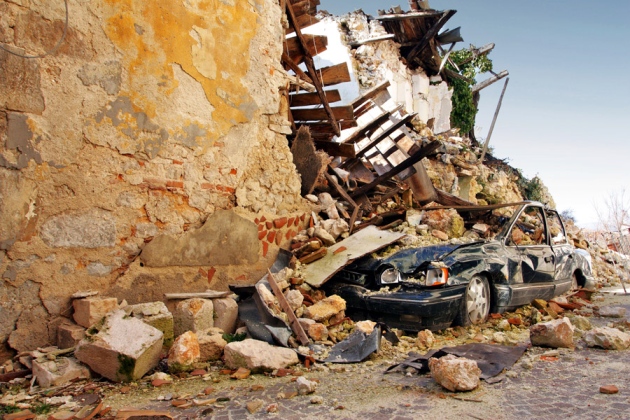 Earthquake lights were reported shortly before a devastating quake struck L'Aquila, Italy, in 2009.

A new catalogue of earthquake lights — mysterious glows sometimes reported before or during seismic shaking — finds that they happen most often in geological rift environments, where the ground is pulling apart. The work is the latest to tackle the enigmatic lights, which have been described by eyewitnesses for centuries but are yet to be fully explained by scientists1, 2, 3.

The study, published in the January/February issue of Seismological Research Letters4, pulls together several strands of research to propose a mechanism by which earthquake lights form. The authors suggest that, during an earthquake, the stress of rocks grinding against each other generates electric charges, which travel upwards along the nearly vertical geological faults that are common in rift zones. When the charges reach Earth's surface and interact with the atmosphere, they create a glow.

“Earthquake lights are a real phenomenon — they’re not UFOs,” says lead author Robert Thériault, a geologist at Quebec’s Ministry of Natural Resources in Quebec City, Canada. “They can be scientifically explained.”

One of the problems in studying earthquake lights is that legitimate reports become entangled with fringe science. Some witnesses improbably describe flames and smoke spurting out of the ground; others mention glowing clouds that could be an aurora, or streaks of heavenly fire that could be meteors.

But some reports cannot be easily explained away, says John Ebel, a geophysicist at Boston College in Massachusetts. In 1727, for instance, a New England man walking his dog one October evening felt the ground start to shake and watched a ball of light roll onto the animal, which yelped.

“We’re all interested in finding out more about earthquake lights,” says Ebel, who was not involved in the new study. “It’s just not a regular area of scientific inquiry, because there’s no way to do an experiment on them.”

Thériault’s team decided to compile all the reliable reports they could find, from the year 1600 to today. They focused on 27 earthquakes from the Americas and 38 from Europe, and sorted through many bizarre tales. Off the Peruvian coast in August 2007, a fisherman reported the sky turning violet a few minutes before the sea began shaking. Near Ebingen, Germany, in November 1911, a woman reported seeing glows that moved along the ground “like snakes” as a quake began.

Of the 65 earthquakes studied, 56 occurred along an active or ancient rift zone. And 63 of the 65 quakes took place where the geological faults that ruptured were almost vertical — as opposed to the shallower angles that many major faults take.

This steep geometry could explain how earthquake lights appear, Thériault and his colleagues say. Team member Friedemann Freund, a mineral physicist at the NASA Ames Research Center in Moffett Field, California, suspects it all starts with defects in a rock, where oxygen atoms inside a mineral’s chemical structure are missing an electron. When the stress of an earthquake hits the rock, it breaks chemical bonds involved in these defects, creating holes of positive electrical charge. These 'p holes' flow can vertically through the fault to the surface, triggering strong local electric fields that can generate light.

Laboratory experiments have shown that electric fields can be generated in certain types of rock by squeezing5. But Freund’s idea is just one of many possible mechanisms to explain earthquake lights. “It makes enough sense, but that doesn’t mean that it’s right,” Ebel says.

The catalogue opens up other ideas for studying earthquake lights, says Thériault. For instance, seismologists who monitor active faults might look for changes in the soil’s electrical conductivity immediately before or during a quake.

More generally, spreading the word about earthquake lights could raise awareness about them as a possible quake warning, says Thériault. The phenomenon has alerted people before: near L’Aquila, Italy, in April 2009, a man saw white flashes reflecting off his kitchen furniture in the early hours of the morning and took his family outside to safety6. Two hours later, a devastating earthquake struck.