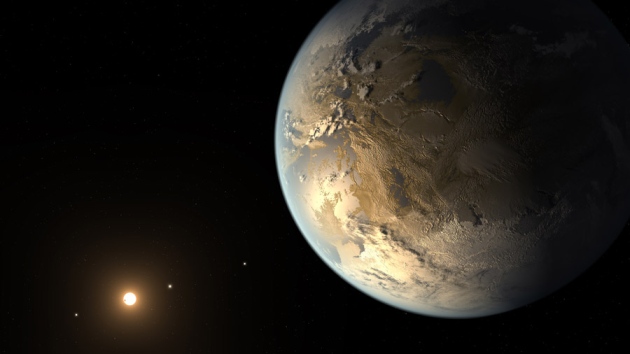 Kepler-186f (artist's conception) is just 1.1 times the size of Earth.

Astronomers have found the first Earth-sized exoplanet within a star's habitable zone. The planet is the closest thing yet to the coveted 'Goldilocks' orb that scientists have long sought — a world roughly the size of Earth orbiting a star at a distance that is just right for liquid water to exist.

“We definitely think it’s one step closer to finding a true Sun–Earth analogue,” says study co-author Elisa Quintana, an astronomer at the SETI Institute in Mountain View, California, and at the nearby NASA Ames Research Center in Moffett Field. But because the star that the exoplanet orbits is a cool, dim one unlike the Sun, Quintana and her colleagues consider the planet more of a cousin to Earth than a twin. The researchers describe the discovery today in Science1.

The planet is the latest of the bonanza coming from the Kepler space telescope, which spent four years staring at a patch of sky in the constellations Cygnus and Lyra before suffering a mechanical failure last May. Kepler looked for exoplanet transits, in which the light of a star dims slightly as an orbiting planet passes across its face as seen from Earth.

Two years of telescope data had revealed four planets around this particular star, Kepler-186, which is about 150 parsecs (500 light-years) from Earth2. Quintana’s team found the fifth and outermost planet, known as Kepler-186f, by looking at an extra year’s worth of transit data. By measuring the degree to which the star’s light dimmed, the researchers could calculate the planet’s size: just 1.1 times that of Earth.

“For me, the impact is to prove that such planets really do exist,” says David Charbonneau, an astronomer at the Harvard-Smithsonian Center for Astrophysics in Cambridge, Massachusetts.

Until now, the closest thing to an Earth-sized planet in the habitable zone of another star was a planet about 40% bigger than Earth around the star Kepler-62. Planets smaller than Earth have also been spotted, but they are not in their star’s habitable zone. 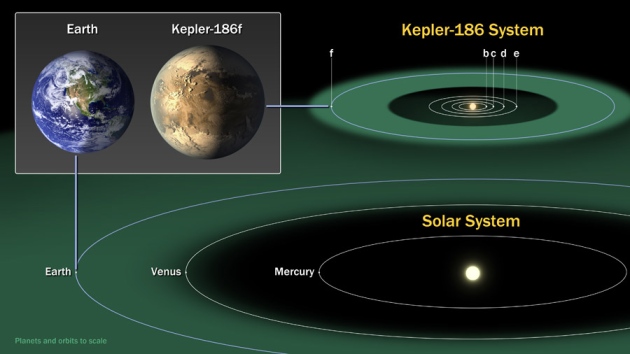 Kepler-186f is the fifth planet discovered in its system, and the first in the habitable zone (green shading).

Kepler-186f is different because it orbits its star at a distance where liquid water could theoretically exist. The planet gets about one-third of the heat and light from its star that Earth gets from the Sun. To stay warm enough for water, it would need to have a thick carbon dioxide atmosphere, perhaps generated by outgassing volcanoes, says Lisa Kaltenegger, an exoplanet researcher at the Max Planck Institute for Astronomy in Heidelberg, Germany.

The planet’s small size suggests that it is probably rocky like Earth, says Quintana. But she and her colleagues cannot say for sure, because they know only its physical size and not its mass.

The star Kepler-186 is of a type known as an M-dwarf, cooler and dimmer than the Sun. More than 70% of all the stars in the Milky Way are M-dwarfs; that sheer abundance makes them good targets for uncovering Earth-like planets. “If we’re going to find any signs of life in the next few decades, it will most likely will be a planet in the habitable zone of an M-dwarf,” says Quintana.

M-dwarf stars are also a good target for Kepler’s transit searches, because their planets are relatively close to the star and thus cross the face relatively often.

Because M-dwarf stars are smaller than the Sun, they would have had smaller disks of gas, dust and other material swirling around them at the time when planets were forming, says Nader Haghighipour, an astronomer at the University of Hawaii-Manoa in Honolulu. “Because the mass of the disk is smaller, it tends to form more smaller planets,” he says. After the fledgling worlds interact gravitationally with one another, “you get a good possibility that one to two planets end up in the habitable zone,” he explains.

Kepler's mechanical failure prevents it from pointing precisely at celestial targets for study. But NASA is considering several options for continuing its operation in a very limited mode. Aside from Kepler, the next big chance for hunting M-dwarf planets from space is NASA's Transiting Exoplanet Survey Satellite, slated for launch in 2017.