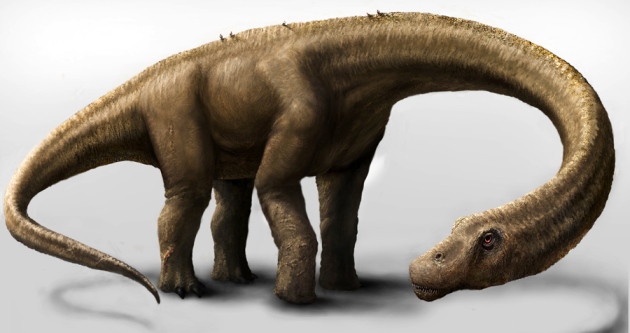 Researchers say that Dreadnoughtus schrani stood about 26 metres from snout to tail.

A newly identified species of supermassive dinosaur might have been one of the largest creatures ever to walk on land, suggests a study published on 4 September in Scientific Reports1.

Well-preserved bones of the species, Dreadnoughtus schrani, were excavated in southern Argentina between 2005–09. The animal is a titanosaur, one in a typically hefty subgroup of the long-necked, plant-eating dinosaurs known as sauropods.

The genus name Dreadnoughtus, from the Old English meaning 'fearing nothing', is a nod to the idea that this dinosaur was so gigantic that healthy adult Dreadnoughtus were probably impervious to attack by predators, says Kenneth Lacovara, a vertebrate palaeontologist at Drexel University in Philadelphia, Pennsylvania, who led the study. The bones of two individuals from the newly described species were found in rocks originally laid down as sediments on a floodplain some time between 66 million years and 84 million years ago.

Roughly 45% of the post-cranial bones of the larger specimen were recovered, Lacovara says. And if researchers use mirror images of bones present on one side of the creature, for example, to stand in for bones missing from the other side, they can produce a fossil reconstruction that includes about 70% of bones in the species' neck, body and tail. 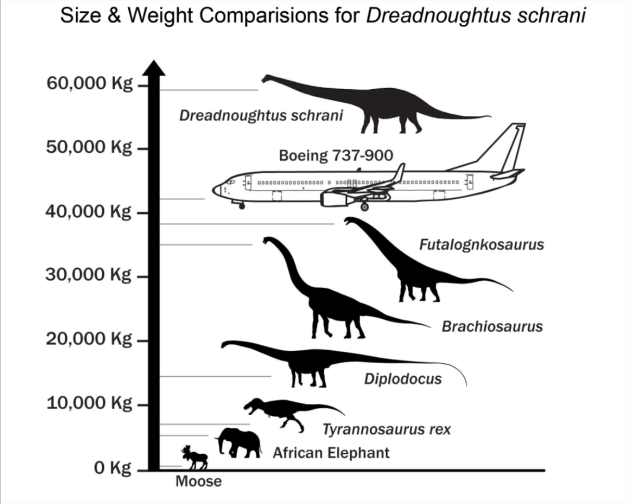 “Any time we have a specimen with as many bones as this one, we get excited about it,” says Kristi Curry Rogers, a vertebrate palaeontologist at Macalester College in St Paul, Minnesota.

King of the giants

Using measurements of the bones and the proportions of those from close kin to estimate the lengths of missing bones, Lacovara and his colleagues estimate that Dreadnoughtus stretched about 26 metres from snout to tail. By measuring the circumferences of the humerus and femur (the upper bones in the forelimb and hindlimb), a recognized gold standard for estimating the body mass of quadrupeds, the team estimates that the larger of the Dreadnoughtus specimens would have weighed about 59.3 metric tonnes when it died.

Although some other titanosaurs have been estimated to weigh as much as 100 tonnes, those figures are based on less-accurate methods extrapolated from fossils that are more fragmentary, says Lacovara. Therefore, he contends that Dreadnoughtus is the largest known land animal for which a body mass can be accurately calculated.

Moreover, he says, analyses of the larger specimen’s fossils suggest that the creature was not yet fully mature and was still growing when it died.

But researchers suggest that the relative completeness of these fossils, not their immense size, is what matters most. The well-preserved bones will help scientists to better understand this species’ close kin, which are known from a much smaller proportion of bones, says Curry Rogers.

The fact that these researchers have unearthed two relatively complete Dreadnoughtus specimens of different size means that palaeontologists will be able to better assess growth patterns in the species if they eventually stumble across the fossils of an adult, Curry Rogers adds. “This is an important specimen, even if it’s not the biggest one out there,” she says.

A previous version of this article incorrectly attributed the picture at the top to Mark A. Klingler.