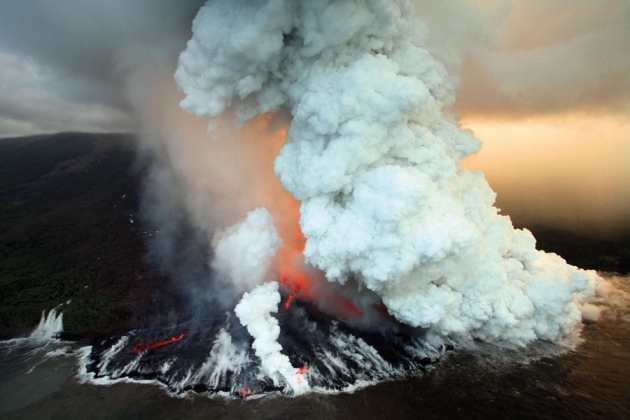 The Piton de la Fournaise volcano on the French island of Réunion may sit atop a mantle plume.

Karin Sigloch sailed into the Indian Ocean this autumn to retrieve traps she had set out the year before. She wasn't hunting deep-sea creatures but something deeper and more elusive — a thin stream of hot rock rising through the bowels of the planet.

Sigloch, a geophysicist at Ludwig Maximilians University Munich in Germany, is one of the latest scientists to pursue this long-sought quarry, known as a mantle plume. Such features are thought to feed some of the most active volcanoes on Earth, and could fuel the biggest volcanic outpourings ever seen. The one Sigloch is tracking, for example, has been linked to eruptions in India 65 million years ago that were so massive they may have contributed to the demise of the dinosaurs.

Mantle plumes could also explain why the Hawaiian volcanoes and many others appear in the middle of crustal plates, far from where they might be expected. And, by releasing pent-up heat from Earth's interior, plumes could have played a major part in how the planet has evolved over billions of years.

The study of mantle plumes has been a mainstay of geophysics since the idea was introduced in the early 1970s1. Using seismic waves to image the innards of the planet, researchers have captured hints of structures that appear to be plumes. But questions linger over what these deep features really are, and a small but vocal subset of critics continues to question whether plumes exist at all.

This is why Sigloch and her colleague Guilhem Barruol of the University of La Réunion, on the French island of Réunion in the Indian Ocean, have spent the past six weeks trawling the ocean's depths. Battling bad weather, equipment glitches and the occasional shark attack on their instruments, the French–German team hauled up all 57 seismometers that they had left on the ocean bottom in autumn 2012. The instruments have been recording the seismic waves that race from distant earthquakes and shake the sea floor. By analysing those vibrations, the researchers plan to map out the rocks beneath Réunion to see whether a mantle plume feeds the island's main volcano2. 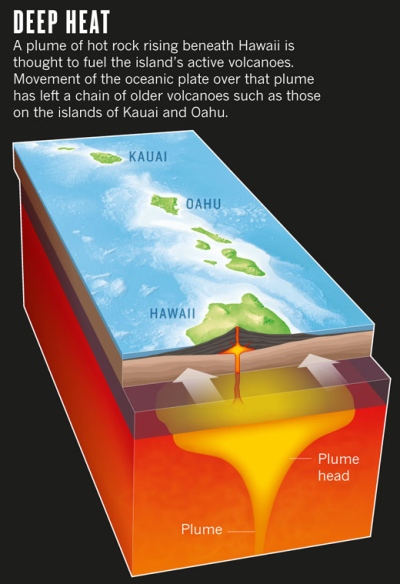 If they succeed, they may chart a mantle plume in greater detail than has ever been done before. They hope to answer some outstanding questions, such as where plumes originate, whether they rise vertically or corkscrew off to one side, and whether they branch into multiple smaller conduits just before breaching Earth's surface.

“Up until now, people have tended to speak of plumes without direct observation,” says Barruol. “Our experiment will be able to see if there is something there.”

Ask a geophysicist how many mantle plumes exist, and the answer may range from zero to several dozen. Most scientists, however, settle on 10 to 20 volcanic hot spots, with some of the strongest examples in Hawaii, Réunion and Tristan da Cunha in the South Atlantic Ocean. The problem is knowing exactly how these regions are fed by plumes.

Earthquakes offer a tool for answering that question. Because seismic waves travel more slowly through molten or soft rock than through solid stone, researchers can map out temperature and density differences inside Earth by analysing how quickly seismic waves arrive at different stations after an earthquake. This allows them to probe the planet's outer crust and the underlying mantle — all the way down to the boundary with the core, some 2,900 kilometres below the surface.

The problem is that seismic images struggle to pick up narrow features, and plumes are thought to be just several hundred kilometres across until they hit the underside of the planet's outer shell, or lithosphere, where they spread out to form the plume head (see 'Deep heat'). “They should be there, but it's hard to see them,” says Sigloch, who is moving to the University of Oxford, UK, in January.

The key to getting better seismic images is to blanket Earth's surface with instruments. On land, this approach has worked well at places such as Yellowstone National Park in Wyoming, thought to lie atop a mantle plume responsible for some of the biggest volcanic blasts in the past 2 million years. Those data were gleaned from a project called EarthScope that has been creeping across the contiguous United States for the past nine years (see Nature 503, 16–17; 2013), deploying temporary seismometers in a 70-kilometre-square grid. It allowed seismologists to generate the best picture yet of the Yellowstone plume3, revealing the structure to be a hot, narrow upwelling that reaches into the lower mantle, at least 900 kilometres deep.

But many mantle plumes are thought to underlie the oceans — and putting instruments on the sea floor is more difficult and expensive than deploying them on land. In the early 2000s, Barruol took a first stab at studying a presumed oceanic plume by installing ten seismic stations on islands in French Polynesia. That turned out to be too few to determine whether a mantle plume was rising beneath the ocean floor in the South Pacific.

In 2005, a University of Hawaii-led team upped the game, placing 36 ocean-bottom seismometers around the Hawaiian islands for a year and then shuffling them to different positions for a second year. The project, which went by the acronym PLUME, yielded the best images yet of some kind of deep structure extending far beneath Hawaii4.

But the more researchers looked at the Hawaiian plume, the more complicated things got. In the classical plume paradigm, a jet of hot, viscous rock rises to the bottom of the lithosphere, where it pools in a sort of pancake some 100 kilometres thick before trickling upwards to feed volcanoes. But under Hawaii, the seismic images suggest a different structure, with an unexpected bulge in the plume well below the bottom of the lithosphere.

Maxim Ballmer, a geophysicist at the University of Hawaii at Manoa, thinks rock chemistry can be used to explain what is going on5. If the plume is rich in a mineral called eclogite, which is denser than typical mantle materials, it will stall as it reaches a depth of about 400 kilometres. The plume rock should pool there and spread out horizontally. Eventually, after more heat rises from below, the eclogite-rich rock would become buoyant enough to rise as a thin plume, Ballmer says.

Researchers have also found other oddities beneath Hawaii. A team led by Catherine Rychert at the University of Southampton, UK, used data from the PLUME experiment to detect a warm pool about 110–155 kilometres below the surface, but it seems to be centred about 100 kilometres west of the archipelago's main island rather than directly beneath it6. That could mean that the Hawaiian plume bends as it approaches the surface, Rychert says — maybe because of some kind of chemical boundary that diverts the plume's flow to one side, or perhaps because the plume rises along a skewed path to begin with.

Beyond that, there is some dispute about how deep beneath Hawaii the PLUME experiment could reliably measure — perhaps only to 1,500 kilometres or so. One of Sigloch and Barruol's goals is to use the dense array of instruments around Réunion to hunt even deeper for its plume. “We are hoping to complete this picture into the lower half of the mantle, which wasn't possible in the case of Hawaii,” says Sigloch.

The problem with Hawaii is that it lies in the middle of the Pacific Ocean. Réunion has the advantage of being close to Madagascar and relatively close to southern Africa, where researchers can place seismic instruments more easily. Sigloch and Barruol are using data from Madagascar and Africa, along with some islands in the Mozambique Channel, to supplement the ocean-bottom seismometers they deployed last year. Altogether, about 120 seismic stations are being used for the Réunion study, covering an area some 2,000 by 3,000 kilometres.

But even with all that, the Réunion work may not be definitive, says Cecily Wolfe, a seismologist at the University of Hawaii who led the PLUME study. “It really depends on what the structure is and what techniques and tricks they can apply to image it,” she says.

No matter what the Réunion study finds, its results are unlikely to convince the few critics of the plume hypothesis. One of them is Warren Hamilton, a geophysicist at the Colorado School of Mines in Golden. He says that 'plumologists' are biased towards seeing plumes in seismic data.

There's no question that plumes are more complicated than once thought. At this week's American Geophysical Union meeting in San Francisco, California, Rychert is scheduled to talk about her seismic studies of several possible plumes in areas including Hawaii, the Galapagos islands, Iceland and the Afar region of eastern Africa. The particular technique she uses probes only the upper few hundred kilometres and so cannot see deep into the mantle. But in most cases, as in Hawaii, she sees features about 100 kilometres deep that she thinks could be ponds of molten rock fed by plumes. And they aren't always where scientists might expect.

In the Galapagos, Rychert has pinpointed three such features: one right where a mantle plume has been identified in the past and two in other locations. That could mean that plumes are smearing around as they hit the lithosphere, diverting and feeding separate volcanoes. “These seismic methods allow us to look in greater detail, and sometimes we see more complicated phenomena,” she says. “Those are the exciting parts.”

Sigloch and Barruol are expecting plenty of excitement in the coming months. Last week, they pulled into port at Réunion, their ship stacked with seismometers and precious data. It will be at least a year before they crunch through all that information and can see what is happening beneath Réunion. But the underwater traps seem to have caught their prey.