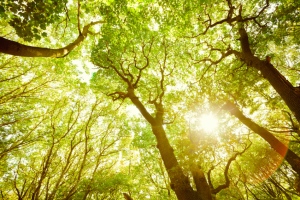 As carbon dioxide levels in the atmosphere continue to climb, most climate models project that the world’s oceans and trees will keep soaking up more than half of the extra CO2. But researchers report this week that the capacity for land plants to absorb more CO2 will be much lower than previously thought, owing to limitations in soil nutrients1.

Because plants take up CO2 during photosynthesis, it has long been assumed that they will provide a large carbon ‘sink’ to help offset increases in atmospheric CO2 caused by the burning of fossil fuels. Some scientists have argued that the increase might even be good for plants, which would presumably grow faster and mop up even more CO2. Climate models estimate that the world’s oceans have absorbed about 30% of the CO2 that humans have released in the past 150 years and that land plants have gulped another 30%.

But the latest study, by ecologists Peter Reich and Sarah Hobbie at the University of Minnesota in St Paul, suggests that estimates of how much CO2 land plants can use are far too optimistic. Plants also need soil nutrients, such as nitrogen and phosphorus, to grow. But few studies have tested whether soils contain enough of these nutrients to fuel growth in proportion to rising CO2.

“This work addresses a question that’s been out there for decades,” says Bruce Hungate, an ecosystem scientist at Northern Arizona University in Flagstaff. "It's a hard question to answer, because it takes a long time to see how ecosystem carbon and nitrogen cycles change."

In a 13-year field experiment on 296 open-air plots, the researchers grew perennial grassland species under ambient and elevated concentrations of both atmospheric CO2 and soil nitrogen.

“Rather than building a time machine and comparing how ecosystems behave in 2070 — which is hard to do — we basically create the atmosphere of 2070 above our plots,” says Reich.

Reich and Hobbie found that from 2001 to 2010, grasses growing under heightened CO2 levels grew only half as much in untreated as in enriched nitrogen soils.

Researchers do not have a firm grasp on the complexities of nitrogen and carbon cycle interactions, so “the vast majority of models do not adequately reflect nutrient limitation”, says Adrien Finzi, a biogeochemist at Boston University in Massachusetts. “The real strength in this study is that now we have this 13-year record of a single ecosystem. It provides a really strong case for the claim that soil resources and nitrogen limitation in particular can impose a major constraint on carbon storage in terrestrial ecosystems.”

A study published in March modelled nutrient cycling across the globe to predict how much carbon plants could sequester over the next 100 years when nutrient limitations are taken into account2. Those simulations, which included nitrogen limitations in northern hemisphere soils and phosphorus limitations in the tropics, predicted that land plants will absorb 23% less carbon than is projected by other models.

Researchers say that much more work is needed to understand how nutrient dynamics will affect carbon uptake — particularly in forest ecosystems, which are expected to be important carbon sinks. Often, says Hungate, these ecosystems seem to offer a “partial, natural, easy solution” to the climate problem. “But it turns out that in reality, ecosystems are complex and only have limited flexibility.”