Exposure to germs in childhood is thought to help strengthen the immune system and protect children from developing allergies and asthma, but the pathways by which this occurs have been unclear. Now, researchers have identified a mechanism in mice that may explain the role of exposure to microbes in the development of asthma and ulcerative colitis, a common form of inflammatory bowel disease. 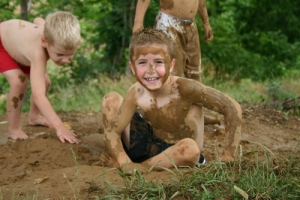 Dig in: eating dirt and playing in the mud are thought to confer protection from allergies and asthma.

In a study published online today in Science1, the researchers show that in mice, exposure to microbes in early life can reduce the body’s inventory of invariant natural killer T (iNKT) cells, which help to fight infection but can also turn on the body, causing a range of disorders such as asthma or inflammatory bowel disease.

The study supports the 'hygiene hypothesis', which contends that such auto-immune diseases are more common in the developed world where the prevalence of antibiotics and antibacterials reduce children’s exposure to microbes.

“We as a species are not exposed to the same germs that we were exposed to in the past,” says study co-author Dennis Kasper, a microbiologist at Harvard Medical School in Boston, Massachusetts.

The researchers induced two groups of mice — germ-free (GF) mice, which are raised in a sterile environment, and specific-pathogen-free mice raised under normal laboratory conditions — to develop forms of asthma or ulcerative colitis. GF mice had more iNKT cells in their lungs and developed more severe disease symptoms, indicating that exposure to microbes was somehow influencing iNKT cell levels and making the GF mice more susceptible to inflammatory diseases.

The study also found that a lack of exposure in early life could not be compensated for by introducing the GF mice to a broader range of microbes in adulthood.

In search of a mechanism to explain the influence of exposure to microbes, the researchers homed in on CXCL16, a signalling protein associated with inflammation and iNKT cells. Expression of CXCL16 was higher in the colon and lung tissue of GF mice than in normal mice, and blocking that expression reduced the numbers of iNKT cells and the amount of inflammation in those tissues.

An analysis of the gene encoding CXCL16 showed that five regions of the gene were hyper-expressed in germ-free mice owing to DNA methylation — the tacking on of molecules to the DNA strand which can alter the production of particular proteins. “We then fiddled around with different compounds that could control methylation of the DNA,” explains Kasper. “Methylation up-regulated CXCL16, and resulted in higher iNKT cell levels.”

“There probably are some specific organisms and molecules produced by those organisms that influence this pathway,” says Kasper. “It seems like there’s something that sets the thermostat at a very, very young age, but we don’t know what it is.”

It remains unclear whether a similar pathway operates in humans, but the results “complement what we see in epidemiology”, says Erika Von Mutius, head of the Asthma and Allergy Department at Munich University Children’s Hospital in Germany. “It supports the idea that the microbiome is very important and the age of exposure is decisive.”

Daniel Peterson, an immunologist at Johns Hopkins Medical Institute in Baltimore, Maryland, says that the study has limitations because no human — no matter how dirt averse — could be as germ-free as the mice used in the study. Nevertheless, Peterson finds the paper provocative. “The striking finding is that you have this long-term persistent elevation of iNKT cells that isn’t reversed later with conventional microbes,” he says. “It really opens up a lot of questions about how long this window lasts and which microbes are involved.”