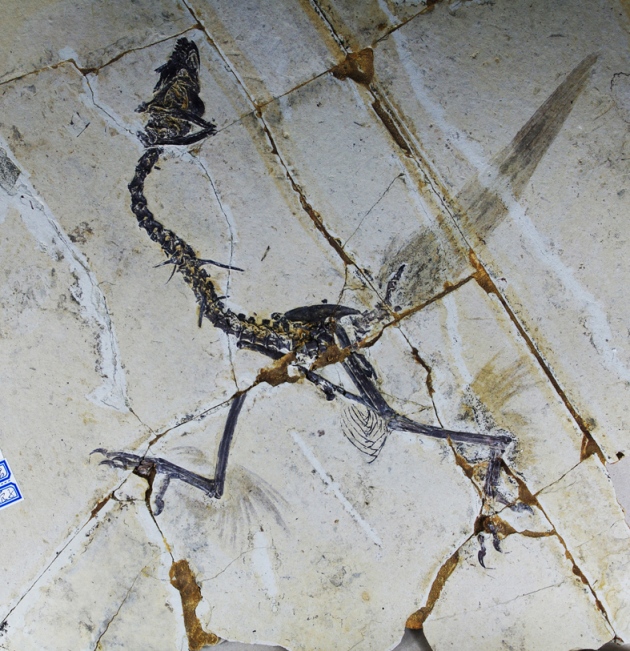 Modern birds have two fewer wings than their ancestors.

Instead of two wings, the first birds might have used four feathered limbs to stay aloft, according to research published today in Science1.

Birdlike dinosaurs, such as Microraptor and Sinornithosaurus, are known to have had long, sturdy feathers on their hindlimbs2. But until now, researchers were not sure whether the earliest birds had already abandoned this extra plumage when they emerged to take to the Cretaceous skies over 100 million years ago.

The researchers, led by Xing Xu, a palaeontologist at the Institute of Geology and Paleontology in Shandong, China, found evidence of feathers on the hindlimbs of 11 basal bird specimens (gathered from the Lower Cretaceous Jehol Group in China)3. On some of the individuals, these feathers appeared to be veined flight feathers that stood perpendicular to the leg bones, similar to those in the basal bird Archaeopteryx.

One specimen, attributed to the Sapeornis genus, had at least one hindlimb feather longer than 50 millimetres. Feathers on the feet were shorter, but were still more than 30 millimetres long.

"It is amazing that so many early birds had large leg feathers," Xu says. The first winged dinosaurs were discovered just 10 years ago, he notes. These findings "are important for both flight origin and feather evolution".

These fossil traces, however, do not indicate how these ancient animals used their rear set of feathers — whether for gliding assistance, steering or both. And this small sampling does not prove that four wings was the rule for all early birds, says Mark Norell a palaeontologist at the American Museum of Natural History in New York. "Flight is many things to many people," he notes. "The origin of flight is not going to come from just one discovery."

Since the era of these early four-winged fowl, scales have replaced most feathers on modern birds' legs. But with a few genetic changes, these coverings can turn back into feathers, such as in Silkie chickens4, which have feathered feet. One specimen from the latest study, belonging to the genus Yanornis, already had some scales below its feathered parts. And modern fowl have not lost all their rear plumage, which is now downier and used for warmth.

Downsizing from four wings might have helped early birds out by allowing the hindlimbs to become dedicated legs that could help them get around better on the ground, the researchers suggest. And as exciting as the discovery of hind-leg flight feathers might be, says Norell, other clues are needed to really understand the locomotion of birds. “What would really be a smoking gun is if they found footprints.”