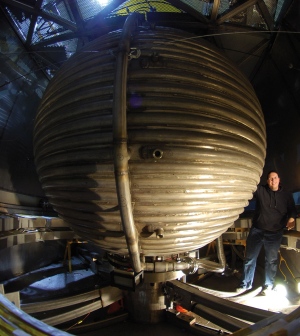 Daniel Zimmerman is part of a team that has been working for ten years to simulate Earth's magnetic field.

The 3-metre-tall ribbed sphere looks like a 'visitor' from another planet, dramatically lit and encased within a sturdy steel box. In fact, the giant orb, housed in a cavernous warehouse at the University of Maryland, College Park, is meant to approximate Earth's core.

Ten years in the making, the US$2-million project is nearly ready for its inaugural run. Early next year, the sphere will begin whirling around while loaded with 13,000 kilograms of molten sodium heated to around 105 °C. Researchers hope that the churning, electrically conducting fluid will generate a self-sustaining electromagnetic field that can be poked, prodded and coaxed for clues about Earth's dynamo, which is generated by the movement of liquid iron in the outer core. If it works, it will be the first time that an experiment that mirrors the configuration of Earth's interior has managed to recreate such a phenomenon.

“Dynamos are easy to generate in nature,” says project leader and experimental geophysicist Daniel Lathrop. “The same is not true for the lab.” Yet simulating this process in the laboratory will guide our understanding of processes that take place 3,000 kilometres below ground, at depths that can be probed only indirectly — by analysing seismic waves that have travelled through Earth's deep interior, for example.

“There's no way for us to measure anything near the core directly,” says Lathrop. “It exceeds the deepest well by a factor of 100.”

The University of Maryland set-up consists of two concentric spheres (see ‘Recreating Earth’s core in the lab’). The inner sphere, at 1 metre across, stands in for Earth's solid inner core; the outer sphere the edge of Earth's mantle. The space between the two is filled with liquid sodium, mimicking the liquid outer core. Each sphere is powered by a separate motor so that it can rotate independently of the other. By spinning the spheres across a range of matched and unmatched velocities — up to 4 revolutions per second for the outer sphere and 12 for the inner — Lathrop and his team will study how heat and rotation might affect the movement of the molten iron in Earth's core. 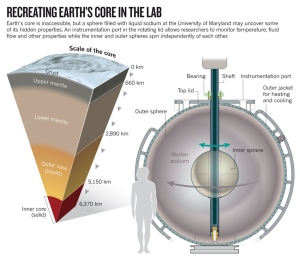 But the question that looms largest is whether the churning sodium will mimic the geodynamo and generate a self-perpetuating magnetic field. The experiment will use Earth's natural magnetism as a 'seed field' to kick-start the process. As this field is dragged and stretched by the spinning, conducting liquid it will generate electric currents. Those currents will then create additional magnetic fields that, when sufficiently twisted around, can amplify themselves and drive the process forward. No one knows whether this feedback loop will work, says Lathrop, because “there are neither theory nor experiments at these parameters”.

Enthusiasm for the effort is building beyond Lathrop's group. “Everyone in the community is waiting with bated breath,” says Andrew Jackson, a geophysicist at the Swiss Federal Institute of Technology Zurich. “He's asking questions that we don't know the answer to.”

The Maryland experiment expands on earlier efforts such as that built by a collaboration between the École Normale Supérieure institutes in Paris and Lyon and the French Atomic Energy Commission in Saclay. Built in Cadarache, France, the experiment uses spinning iron discs to force turbulence in liquid sodium within a cylindrical case. In 2007, the team reported that the combination of motion and a seed magnetic field led to the formation of a dynamo with some resemblance to Earth's (M. Berhanu et al. Europhys. Lett. 77, 59001; 2007). The next step is to explore dynamos in set-ups that more closely match reality, says Jean-François Pinton, an investigator with the French experiment, which is still running.

“Our experiment is a physicist's experiment,” Pinton says, because it aims only to generate a dynamo, regardless of how realistic the set-up is. “Dan is after what Earth does.”

Other groups have also approximated planetary shapes in liquid-sodium experiments, but they haven't managed to generate self-sustaining dynamos. A group at the University of Wisconsin–Madison has a 1-metre-diameter spherical experiment that doesn't rotate, but instead drives turbulence with internal propellers. A group in Grenoble, France, built a 40-centimetre rotating set-up with a sodium-filled outer sphere and a solid inner sphere. Both experiments have uncovered interesting properties of fluid dynamics of conducting liquids, but not created a dynamo.

Lathrop's latest construction is the fourth and largest in a series of sodium-spinners built by his group. None has yet generated a dynamo, but the size of the new sphere should give it a better chance of doing so.

“Dynamos are easy to generate in nature. The same is not true for the lab.”

Lathrop and others hope that their work will shed light on how rotational forces in Earth's core deflect flows of electrically conducting liquid into a configuration that produces a magnetic field with north and south poles. It might also help to explain what triggers changes in Earth's magnetic field such as north–south pole reversals, which occur on average every few hundred thousand years, but can happen after a few tens of thousands of years or a few million. The last reversal was some 780,000 years ago. Over the past century and a half, the magnetic field has weakened by about 10%, leading some researchers to suggest that another pole-reversal is in the offing.

Although a pole reversal is unlikely to cause any major disruptions, the weakening of Earth's magnetic field is “at least mildly alarming”, says Lathrop, because the field shields us from charged solar particles, which can disrupt power grids (see Nature 441, 402–404; 2006). “Earth's magnetic shield is part of what makes this planet hospitable,” says Lathrop.

The sphere is now nearly three-quarters full and is awaiting its final shipment of solid sodium, expected next month. Once the last barrel of sodium is put in, the team will reconfigure the experiment for spinning.

“We've taken all the steps that we can think of to try to get dynamo action, but we don't have a detailed prediction about whether or not those steps will be successful,” says Daniel Zimmerman, a postdoc at Maryland who has been with the project since the beginning.

But Lathrop isn't worried, saying that a large rotating volume of a liquid conductor is certain to churn up some surprises. “With or without the dynamo action it's going to be interesting,” he says.