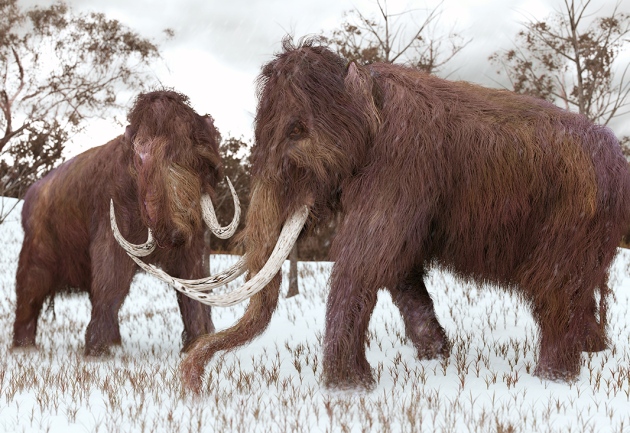 Woolly mammoth populations were plentiful 45,000 years ago, but went into genomic freefall as their numbers dwindled around 4,000 years ago.

Isolated on an island in the Arctic Ocean, not only were woolly mammoths the last of a dying species but they were also swamped with ‘bad genes’ that are likely to have stripped their sense of smell and saddled them with translucent coats.

A study1 published 2 March in PLOS Genetics gives a rare insight into how genomes change as a species dies out. Towards the end of the last Ice Age, around 11,700 years ago, woolly mammoths ranged through Siberia and into the colder stretches of North America. But by about 4,000 years ago, mainland mammoths had died out and only 300 remained on Wrangel Island off the Siberian coast.

In order to examine this disappearance at the genetic level, biologists Rebekah Rogers and Montgomery Slatkin at the University of California, Berkeley, compared the complete genome of a mainland mammoth (Mammuthus primigenius) that lived about 45,000 years ago with that of a Wrangel Island mammoth from about 4,300 years ago. The sequences were made available by Love Dalén at the Swedish Museum of Natural History in Stockholm.

“As I looked at the sequence data,” says Rogers, “it became very clear that the Wrangel mammoth had an excess of what looked like bad mutations.”

Some of these changes are only visible to a geneticist’s eye. Compared with the mainland mammoth, the Wrangel Island specimen's genome was riddled with deletions and an abundance of sequences called stop codons — which tell a cell when to stop transcribing a section of DNA — among other changes to the DNA. But some of these changes would also have been visible in the mammoth’s behaviour and appearance.

Rogers and Slatkin found that genes related to smell and urinary proteins, which in modern elephants are important for eliciting mating behaviours or signalling social status were shut down by the mutations. These might be related, the researchers hypothesize, because a duller sense of smell may have been hitched in a feedback loop to the loss of urinary proteins, leading to the rapid loss of both. Changes to the Wrangel mammoths’ coats would have been even more obvious. Rogers and Slatkin propose that a mutation in a part of the genome called FOXQ1 would have given the mammoths a ‘satin’ coat, marked by fur that is the same colour as normal but is shiny and translucent.

What happened on Wrangel wasn’t a matter of inbreeding, Rogers says — the genetic signal is different.

“What did happen was that the population was simply small,” she says, and “under these circumstances any mammoth was better than no mammoth at all”, so natural selection did not operate in the usual way. This allowed unhelpful mutations to rack up, following a previously identified phenomenon called nearly neutral genome evolution. “Bad mutations that would normally be weeded out weren’t removed from the population because of reduced competition,” says Rogers.

“Isolation and reducing population size have long been recognized as important factors causing endangerment,” says palaeontologist Ross MacPhee of the American Museum of Natural History in New York City, but the recognition of the mammoth’s “genetic meltdown” is a sign of how far studies of ancient DNA have come, and the work that still lies ahead.

The changes on Wrangel Island took place after mammoths had already been wiped out on the mainland. Tracking the downfall of the species is an ongoing effort, says MacPhee. “With additional specimens, drawn from other times and parts of the woolly mammoths’ enormous range, we may get a better picture of the genetic load that this species was labouring under at the end of its tenure.”

Still, MacPhee adds, the study “is maybe telling us something very important about what happens in populations already under severe threat because of diminished range and numbers”.

MacPhee cautions that no single animal or genome can tell the whole story for an entire species. But he notes that human hunting, climate change or any other external factor wasn't enough by itself to wipe out the woolly mammoth. There had to be some other element operating within the animals, driving them to extinction.

As dramatic as genetic meltdown sounds, Rogers says that it’s difficult to tell whether the increase in bad mutations contributed directly to the final extinction of the woolly mammoth. Yet the findings have implications for the survival of the mammoths’ elephant cousins and other endangered mammals. Rogers notes that it’s better to prevent a species from becoming endangered in the first place than to try to recover its genetic diversity after a sharp plummet.

“Even though we can improve the number of individuals in endangered populations,” she says, “their genomes may still bear the hallmarks of genomic meltdown, which will be difficult to undo.”