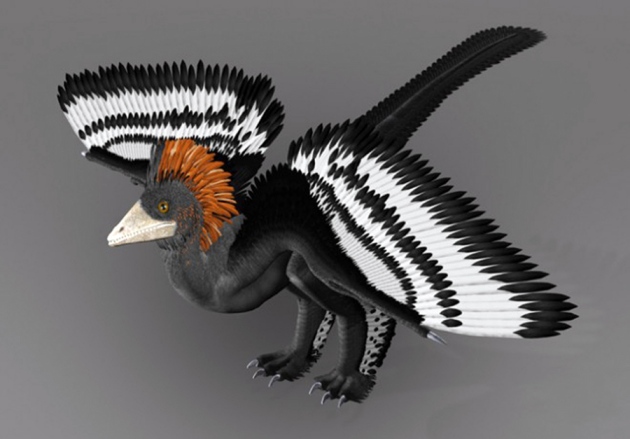 Reconstructions of the feather hues of ancient birds such as Anchiornis huxleyi may need to be amended, according to simulations of the fossilisation process.

Scientists have been trying to decipher the colours of feathered dinosaurs by studying pigmented structures called melanosomes in the animals' fossilized plumes. These studies have launched a Renaissance of correctly coloured dinosaur artwork, but a team of palaeontologists has now questioned the accuracy of these reconstructions.

Melanosomes are organelles typically present in the cells of the skin, hair and feathers. They come in two main types, with different shapes associated with different pigments. Reddish-brown ones tend to be shaped like meatballs; black or grey ones are usually sausage-shaped.

Although fossilised melanosomes have lost their original colours, Jakob Vinther, a molecular palaeobiologist at the University of Bristol, UK, started using the shape and distribution of the organelles to infer the colour of prehistoric feathers back in 2007. He has since used the technique to paint a black-and-grey body and red crest on the small dinosaur Anchiornis huxleyi1, a grey-and-red coat on the giant penguin Inkayacu paracasensis2 and a glossy black sheen on the four-winged Microraptor3.

But Maria McNamara, now also at the University of Bristol, says that some of these reconstructions may be inaccurate.

McNamara and her colleagues mimicked the process of fossilization by placing modern bird feathers in an autoclave — a machine that sterilizes lab equipment with 250 times atmospheric pressure and temperatures of 200–250 °C. “A brief spell in an autoclave can reasonably simulate the effects of temperature and pressure during burial over millions of years,” she says. 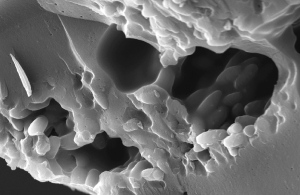 The melanosomes survived, but they also shrank. Those that experienced the hottest temperatures contracted by 19% in length and 20% in width. The results are published in Biology Letters4.

McNamara says that the extent of the distortions depends on how the feathers are preserved. Those from hotter and deeper deposits, such as the Chinese sediment that Anchiornis came from, would be more heavily deformed than those from shallower regions. It should be possible to account for these changes and to revise the colours previously assigned to such dinosaurs, McNamara says. “The ball is now in [Vinther’s] team's court to re-analyse the data, which would be a great study.”

But Vinther says that the paper is “effectively erecting a straw man”. He was already aware that melanosomes shrink gradually during fossilization, leaving behind hollow imprints in the spaces they occupied when they were full-sized. He adjusted for these changes in his recent papers on Inkayacu, Microraptor and Archaeopteryx and found that they do not significantly alter the reconstructed palettes1–3.

Vinther also doubts that Anchiornis’s colours need to be revised, because he based those on the ratio of the melanosomes’ length to width. Both dimensions shrink roughly equally during fossilization, so the ratio between them says constant. “It could have an effect if we [eventually] want to discriminate between a reddish-brown and a slightly less reddish-brown, but we’re not near those sorts of assessments,” he says.

Still, McNamara argues that palaeontologists now need to understand how far melanosomes have to shrink before the colour of the feather changes. If big shrinkages are needed, it should be possible to reconstruct colours from a wide range of fossils. If a little shrinkage is enough, “we need to be really cautious interpreting fossil feather colour in the future”, she says.