In the search for methods to limit global warming, it seems that stimulating the growth of algae in the oceans might be an efficient way of removing excess carbon dioxide from the atmosphere after all.

Despite other studies suggesting that this approach was ineffective, a recent analysis of an ocean-fertilization experiment eight years ago in the Southern Ocean indicates that encouraging algal blooms to grow can soak up carbon that is then deposited in the deep ocean as the algae die.

In February 2004, researchers involved in the European Iron Fertilization Experiment (EIFEX) fertilized 167 square kilometres of the Southern Ocean with several tonnes of iron sulphate. For 37 days, the team on board the German research vessel Polarstern monitored the bloom and demise of single-cell algae (phytoplankton) in the iron-limited but otherwise nutrient-rich ocean region. 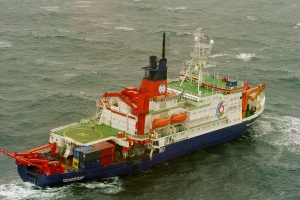 Researchers studying iron-fertilized algal blooms from the research vessel Polarstern have shown that carbon in dead algae sinks to the deep ocean.

Each atom of added iron pulled at least 13,000 atoms of carbon out of the atmosphere by encouraging algal growth which, through photosynthesis, captures carbon. In a paper in Nature today, the team reports that much of the captured carbon was transported to the deep ocean, where it will remain sequestered for centuries1 — a 'carbon sink'.

“At least half of the bloom was exported to depths greater than 1,000 metres,” says Victor Smetacek, a marine biologist at the Alfred Wegener Institute for Polar and Marine Research in Bremerhaven, Germany, who led the study.

The team used a turbidity meter — a device that measures the degree to which water becomes less transparent owing to the presence of suspended particles — to establish the amount of biomass, such as dead algae, that rained down the water column towards the sea floor. Samples collected outside the experimental area showed substantially less carbon being deposited in the deep ocean.

The EIFEX results back up a hypothesis by the late oceanographer John Martin, who first reported in 1988 that iron deficiency limits phytoplankton growth in parts of the subarctic Pacific Ocean2. Martin later proposed that vast quantities of iron-rich dust from dry and sparsely vegetated continental regions may have led to enhanced ocean productivity in the past, thus contributing to the drawdown of atmospheric carbon dioxide during glacial climates3 — an idea given more weight by the EIFEX findings.

Some advocates of geoengineering think that this cooling mechanism might help to mitigate present-day climate change. However, the idea of deliberately stimulating plankton growth on a large scale is highly controversial. After noting that there were gaps in the scientific knowledge about this approach, the parties to the London Convention — the international treaty governing ocean dumping — agreed in 2007 that ‘commercial’ ocean fertilization is not justified (see 'Convention discourages ocean fertilization').

The finding that ocean fertilization does work, although promising, is not enough to soothe concerns over potentially harmful side effects on ocean chemistry and marine ecosystems, says Smetacek. Some scientists fear that massive ocean fertilization might produce toxic algal blooms or deplete oxygen levels in the middle of the water column. Given the controversy over another similar experiment (see 'Ocean fertilization experiment draws fire'), which critics said should not have been approved in the first place, the Alfred Wegener Institute will not conduct any further artificial ocean-fertilization studies, according to Smetacek.

“We just don’t know what might happen to species composition and so forth if you were to continuously add iron to the sea,” says Smetacek. “These issues can only be addressed by more experiments including longer-term studies of natural blooms that occur around some Antarctic islands.”

But some experts argue that artificial ocean-fertilization studies should not be abandoned altogether. “We are nowhere near the point of recommending ocean fertilization as a geoengineering tool,” says Ken Buesseler, a geochemist at the Woods Hole Oceanographic Institution in Massachusetts. “But just because we don't know all the answers, we shouldn't say no to further research.”