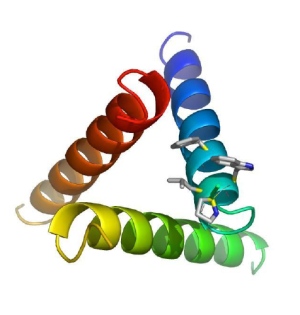 A peptide similar to the one pictured was effective at treating type-2 diabetes in a small clinical trial.

An experimental diabetes treatment that packs the action of two natural hormones into a single injectable agent has been shown to successfully lower blood sugar in humans, monkeys and rodents. Marking a new approach in the treatment of the disease, the currently unnamed molecule also seems likely to cause fewer gastrointestinal side effects in humans than did other diabetes medicines.

“We aimed for achieving the best glycaemic control with as little effect on the gut as possible,” says Richard DiMarchi, a biomolecular scientist at Indiana University in Bloomington, and a member of the international team that publishes the results today in Science Translational Medicine1.

The molecule, which targets receptors for the two hormones, glucagon-like peptide 1 (GLP-1) and glucose-dependent insulinotropic polypeptide (GIP), was developed in DiMarchi’s lab. Swiss pharmaceutical company Roche, based in Basel, supported the research and has licensed the agent.

As part of the study, 44 patients with type 2 diabetes received once-weekly injection of the dual-action molecule at various doses for six weeks while nine others received placebo injections. Blood tests showed a dose-dependent response; at the highest doses, a standard marker of blood glucose levels dropped an average of 1.1 percentage points from the baseline (which ranged from 7.4% to 7.9%; normal levels are below 5.7% in non-diabetic patients). In the placebo group, the marker dropped by just 0.16 points.

There were no significant changes in body weight in the human trial, but the animal studies suggest that a long-term treatment at higher doses could also treat obesity. Obese mice receiving the highest doses of the molecule lost nearly 19% of their body weight in just one week, compared with about 9% for mice treated with equivalent amounts of a commonly prescribed diabetes drug called liraglutide.

Both GLP-1 and GIP naturally respond to spikes in blood sugar by stimulating insulin production. GLP-1 also decreases appetite and suppresses glucagon, a hormone that raises blood sugar. Several current diabetes drugs, including exenatide and liraglutide, work by mimicking GLP-1. But as DiMarchi notes, about 10–30% of people taking such drugs develop gastrointestinal distress, including nausea, flatulence and sometimes vomiting. In the latest trial, just two people in the treatment group complained of mild nausea.

DiMarchi and his colleagues have previously shown that combining GLP-1 and oestrogen could reverse risk factors for diabetes in mice2. But there have been few attempts to create drugs that harness the power of GIP. The hormone clearly has a natural role in controlling blood sugar, says DiMarchi, so it should not be ignored in drug development. “The best pharmacology replicates physiology,” he says. “This a key that works on both locks.”

By combining human trials with thorough rodent and monkey studies in a single paper, the researchers have “delivered a complete package”, says Philipp Scherer, chair of diabetes research at the University of Texas Southwestern Medical Center in Dallas. “Usually, if you just have complete rodent data, you can make quite a splash.” However, the suggestion that the treatment causes relatively few side effects needs to be confirmed in a larger clinical trial, he says.

DiMarchi says that the next step will be a long-term study that compares the latest approach to an established GLP-1 mimic. “This is still years away from being an approved drug,” he adds.