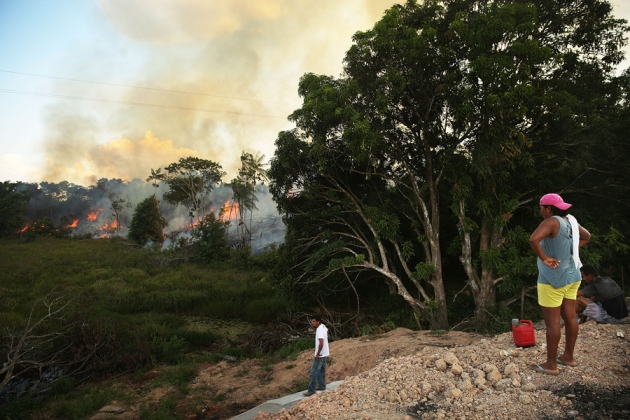 Most fires in the Amazon are started by landowners trying to clear fields and forests for cultivation.

The Amazon is ready to burn. After an unusually dry rainy season, the southern section of the rainforest is heading into winter with the largest moisture deficit since 1998. This has set the stage for an unusually intense fire season, according to a forecast issued on 29 June that is based on sea-surface temperature trends in the Atlantic and Pacific oceans.

“The region is primed to have record fire activity,” says forecast co-author Douglas Morton, a remote-sensing expert at NASA’s Goddard Space Flight Center in Greenbelt, Maryland. More broadly, a team led by Morton and James Randerson, a biologist at the University of California, Irvine, says that it can predict fire risk across much of the globe — based in part on the influence of the weather pattern El Niño and its counterpart, La Niña.

The Amazon burn predictions stem from the epic El Niño weather event that emerged last year. El Niños warm the tropical Pacific Ocean, which tends to reduce rainfall during the rainy season, and the warmer temperatures in the tropical Atlantic Ocean can suppress rains during the dry season.

In each case, Morton and Randerson say, ocean conditions can provide a hint of precipitation trends in key forested areas on land several months in advance. “All of these processes are contributing to both the build-up of fuels and the moisture level of those fuels going into the dry season,” Randerson says. “That’s what leads to a predictability in global fire regimes.”

Other teams are looking to include fire risk in short-term and seasonal weather forecasts by incorporating independent fire models. These models attempt to account for factors such as vegetation type and the likelihood of lightning strikes or agricultural fires. Eventually, such forecasting systems could integrate more complex phenomenon such as the dynamics of vegetation growth, the way that fire tends to propagate across a landscape and the gases and particles that are emitted during a fire, says Allan Spessa, a fire modeller at the Open University in Milton Keynes, UK.

The European Centre for Medium-Range Weather Forecasts in Reading, UK, plans to soon make public its prototype system to forecast fire risk about six weeks in advance, and the centre’s modellers are working to include fire risk in their seasonal forecasts. Florian Pappenberger, who heads the centre’s work on extreme-weather forecasting, says that the statistical approach used by Morton and Randerson is solid and can serve as an independent check on model forecasts, which come with their own uncertainties. Forecasts for water availability in rivers, reservoirs and agricultural systems operate in such a manner today.

“I don’t think one method replaces the other,” he says. “I expect that merging both will be quite beneficial.”

However, whether forests actually go up in smoke depends on a host of factors, including law-enforcement and fire-suppression efforts that vary from region to region. For instance, almost all fires in the Amazon are started by landowners clearing fields and forests for cultivation and livestock. But once the humidity drops and the vegetation dries out, those agricultural fires can run wild.

The likelihood that this will happen increases as the dry season wears on, but scientists can already see El Niño’s impacts. Morton and Randerson’s team analysed rainfall measurements from gauges and satellites during the rainy season, and used data from NASA’s Gravity Recovery and Climate Experiment (GRACE) satellites to provide an estimate of the cumulative water storage on land — in soils, aquifers and rivers — going into the dry season. Randerson says that the situation in the Amazon is worse than it was during the major droughts of 2005 and 2010 and on par with 1998, after the last major El Niño.

As well as forecasting risk in the Amazon, Morton and Randerson are tracking and mapping fires there using infrared measurements collected by the Moderate Resolution Imaging Spectroradiometer (MODIS) sensors aboard NASA’s Terra satellite. The device has detected almost 12,500 fires in the Mato Grosso region of Brazil this year alone — making 2016 the third-worst year in the MODIS record, which stretches back to 2003.

In the Amazon, the question now is whether Atlantic storm systems will bring much-needed relief during the dry season. Morton and Randerson have identified a link between Atlantic hurricanes and Amazon fires: when the tropical Atlantic is warm, cyclones are more likely to form, and those cyclones pull the rain bands that often flow into the Amazon northwards. The US National Oceanic and Atmospheric Administration’s hurricane forecast currently calls for a neutral season, but the tropical Atlantic has been cooling, which bodes well for the Amazon.

“If there were to be a shift in north Atlantic sea-surface temperatures, that could short circuit this fire forecast,” Morton says.