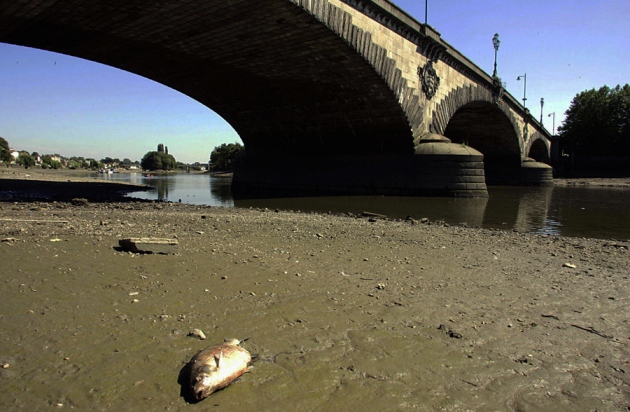 European proposals to regulate pharmaceuticals in aquatic organisms could already be dead in the water.

Europe is set to quash a precedent-setting initiative designed to tackle a disturbing side effect of common drugs — their impact on aquatic life. Nature has learned that landmark regulations intended to clean Europe’s waterways of pharmaceuticals are likely to be dead on arrival when they reach a key vote in the European Parliament next week.

The proposal by the European Commission, which would limit the concentrations in water of a widely used contraceptive and an anti-inflammatory drug, have sparked intense lobbying by the water and pharmaceutical industries, which say that the science is uncertain and the costs too high. European Union (EU) member states, alarmed by cost estimates of tens of billions of euros, seem to agree. Researchers and environmentalists question those estimates, and argue that the proposal should be judged principally on what they say is strong scientific evidence, rather than on financial concerns.

Many of Europe’s rivers are home to male fish that are ‘intersex’ and so display female sexual characteristics, including female reproductive anatomy. Some males also produce vitellogenin, a protein normally found in eggs that can be induced in males by hormone exposure1, 2. In one of the largest studies of the problem, the UK government’s Environment Agency found in 2004 that 86% of male fish sampled at 51 sites around the country were intersex.

Toxicologists blame this feminization on endocrine-disrupting chemicals — particularly the active ingredient in the contraceptive pill, ethynyl oestradiol (EE2) — that dribble through municipal sewage effluents into the environment. The feminization affects fish health and lowers the sperm count in males, raising the risk of a population crash. “This is the most evidence we have on the impact of any chemical in the aquatic environment,” says Susan Jobling, an environmental toxicologist at Brunel University in London.

With concerns growing over EE2 pollution, the European Commission proposed in January that the EU’s member states limit the drug’s annual average concentrations in surface waters to no more than 0.035 nanograms per litre (ng l−1). One study2 recorded adverse effects in species living in water containing 1 ng l−1 of EE2, for example, and predicted a ‘no effect’ level of 0.2 ng l−1. Environmental toxicologists typically extrapolate such evidence to estimate lower ‘safe’ limits that would cover a range of other species (see ‘Raging hormones’).

The commission has also proposed that lawmakers take action on diclofenac, an anti-inflammatory drug that disrupts cell function in the liver, kidneys and gills of fish3. Diclofenac is already notorious for having devastated vulture populations in Asia4. 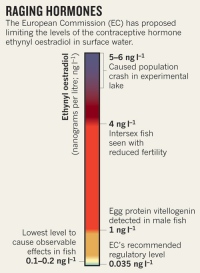 The EE2 standard would represent a severe cut in pollution levels. For example, a study led by environmental chemist Mike Gardner at Atkins, an environmental consultancy headquartered in Epsom, UK, tested effluents from 160 wastewater treatment plants. He found that almost all effluents exceeded the commission’s proposed standard for EE2, and that about half exceeded it by more than 13 times.

On 28 November, members of the European Parliament’s environment committee will discuss and vote on the proposal. A rejection from the committee would almost certainly doom the proposal in the full parliamentary vote, scheduled for next year. On the basis of previous committee discussions of the topic, as well as policy documents seen by Nature, that outcome now looks highly likely. “There was no proper discussion about the environmental impacts of these chemicals in the committee; it just boils down to politics,” says Axel Singhofen, an adviser to the Members of the European Parliament (MEPs) for The Greens who sit on the environment committee.

Upgrading the technology for wastewater treatment could eliminate most of the pollution. Researchers and policy experts suggest sharing the costs among all responsible parties, including the water and drug industries, and that some expense would be passed on to the public. Toxicologists and the water industry also advocate stricter controls on the authorization, use and disposal of endocrine-disrupting chemicals — for example, by educating people not to flush unwanted drugs down the drain, or by prescribing fewer of them. The drugs are widely used in livestock, so preventing animals from urinating close to rivers could further reduce the amount of drugs leaking into surface waters.

The water and pharmaceutical industries both acknowledge that EE2 is present in rivers, and that it is responsible for intersex fish. But they also say that there is little evidence of harm, noting that Europe’s freshwater fish populations are not plummeting. Nature has seen a pharmaceutical industry position statement, distributed to member states, that calls existing scientific data on EE2’s environmental impacts “limited” and “inconclusive”. The European Federation of National Associations of Water and Waste Water Services (EUREAU), based in Brussels, concurs, saying it has “significant concerns” about what it calls a lack of data on the environmental impact of the substances, as well as the potentially huge costs of eliminating them from waste water.

Unpublished position statements from the United Kingdom and the Netherlands echo the industries’ arguments. “Due to uncertainties in the assessment of benefit and costs, and until further monitoring data have been gathered to inform the policy making, it would not be appropriate to propose measures at EU level,” the Netherlands’ statement says.

A report prepared by environment committee member Richard Seeber, a Christian Democrat MEP from Austria, could also sway the vote. Seeber’s report suggests delaying any standards for pharmaceuticals in water until 2027. He agrees with the water industry that the issue should be tackled by restricting the authorization and use of the chemicals, rather than by treating waste water.

Seeber is also the founder and president of the European Parliament’s Intergroup on Water, which brings together MEPs, industry and non-governmental organizations to discuss water issues. That group receives “personnel support” and “material contributions” from EUREAU, according to financial statements that Nature obtained through a freedom of information request. Seeber says that EUREAU’s involvement was limited to providing organizational and administrative support: “At no point did a member of EUREAU work in our office or at the Parliament, nor did they advise us on content-related matters.”

The UK government, meanwhile, estimates that treated water from around 1,360 of the country’s wastewater treatment plants would fail the proposed environmental standards for EE2. Upgrading these plants to meet the standard would cost between £26 billion (US$41 billion) and £30 billion, it says.

Yet the United Kingdom is applying an overly stringent standard of 0.016 ng l−1 to estimate the cost of the EU rules, the European Commission told Nature. The UK government’s Department for Environment, Food and Rural Affairs has not responded to repeated requests from Nature to explain its calculations. Applying the proposed 0.035 ng l−1 standard would almost halve those costs, the commission says. Such sums are not without precedent: according to the UK water regulator, Ofwat, water companies in England and Wales have already committed to spend £22 billion between 2010 and 2015 on improving water infrastructure — including £4.1 billion for improving water quality in the environment.

Britain’s estimate also assumes that all plants would need to be fitted with the most advanced — and most expensive — treatment technology, which uses granular activated carbon to absorb pharmaceuticals from the water. But such measures will not be necessary at every plant, says Andrew Johnson, an environmental chemist at the Centre for Ecology and Hydrology in Oxfordshire, UK. He suggests that low-cost improvements to existing wastewater treatments, such as sand filters, may be sufficient in some cases.

The investment would bring additional benefits, because improved water treatment could remove many other pollutants of concern, says Michael Depledge of the Peninsula College of Medicine and Dentistry in Plymouth, UK, a former chief scientist for the UK Environment Agency who studies the environment and human health. Levels of many pharmaceuticals are rising in rivers across Europe, he says, posing a “significant risk” to the environment and health — through the emergence of antibiotic-resistant bacteria, for example.

Environmental scientists say that the case for action will only get stronger. Fish populations may be stable now, but a study of fathead minnows (Pimephales promelas) in an experimental lake in Canada has shown that exposure to high levels of EE2 triggered a population crash5. And researchers think that the EU is missing a chance to set a global precedent. “It’s a test case for regulating pharmaceuticals in the water,” says Jobling. “If they don’t regulate on EE2, they won’t regulate anything.”

This story wrongly said that Axel Singhofen is a Member of the European Parliament (MEP). In fact, he is an adviser to Green MEPs who sit on the environment committee. The text has been corrected to reflect this.